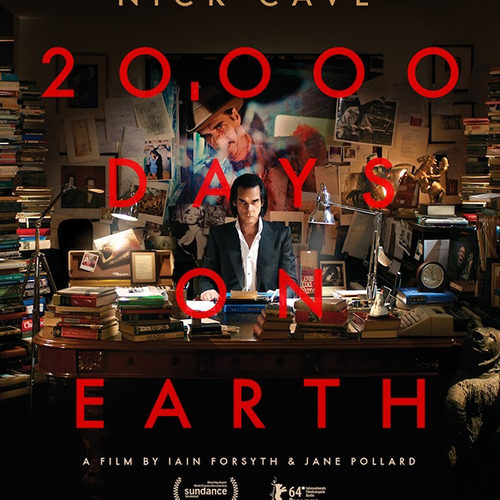 I must have been nineteen or twenty when I was first introduced to Nick Cave‘s music. As a college kid trying to broaden my horizons cinematically with “classics” from foreign auteurs, I popped in Wim Wenders‘ Wings of Desire for reasons I no longer recall. While a brilliant film regardless, I could not shake the violence in Cave’s stage presence or the intensity of his songs against the romantic plot thrusting my ears into its wake. So even though I knew a little about 20,000 Days on Earth and its promise of being more than your run-of-the-mill documentary, I still braced myself for that rough physicality. It’s there briefly—via a performance snippet of “Stagger Lee”—but that creature isn’t quite Nick Cave. No, the man behind the self-proclaimed “awe and terror” persona is very much different. In order to show his true self, directors Iain Forsyth and Jane Pollard give us a filmed curio cabinet of relics and recollections more akin to the video for Johnny Cash‘s cover of “Hurt” if he had given us a tour while singing. It’s the perfect depiction too because Cave talks about the importance of memory throughout and his interest in its worth above reality. To lose it is his worst nightmare; to speak about it his greatest weapon for self-improvement and catalyst for creation. Because his narrative songs speak about real people with a “mythologized, edited memory” composed for the world to hear, it’s no surprise the film embodying his own life would prove a quasi-autobiographical journey through words rather than strictly captured images. We therefore receive a glimpse behind the façade at his truth above celebrity.

That’s not to say he doesn’t embrace the mysterious rockstar vibe he’s cultivated, he just admits it’s an escape. There’s talk about looking in a mirror as a kid and not liking what he saw being a driving force towards finding this identity that took him into a band called The Birthday Party before settling down with The Bad Seeds. Beyond the deep, often frightening voice speaking more than singing his eccentric and jarring contrasts—the counterpoints he deems crucial to songwriting—is a very introspective Aussie who isn’t afraid of past demons or laying everything out. Heck, the first “interview” filmed in this staged day-in-the-life juxtaposition of Cave’s extremely interesting life is a therapy session at the hands of psychoanalyst Darian Leader nodding and laconically questioning in dulcet tones from across the room. The film is very much orchestrated by Cave himself, candidly delivering conversations from the front seat of his car with Ray Winstone on the performative power of artists, ex-bandmate Blixa Bargeld about finding a song in the editing room and through playing it live, and Kylie Minogue concerning the Kylie Minogue factor on a tiny moment of his niche career by duetting with her on “Where the Wild Roses Grow”. Flowery voiceovers arrive where they suit the quiet visuals by overlaying poetic remarks; cut scenes in the studio recording “Push the Sky Away” share the collaborative process Cave admits to loving as a way to coax greatness from his solitary ideas. It’s a memoir more than documentary as a result because what he says about the things shown onscreen always ends up more worthwhile than the things themselves.

With a high production value and confidently abrupt transitions from Forsyth and Pollard, the fictitious day is abstracted into loose vignettes of real and imagined places. There are genuine reactions to statements made by Cave and his friends, though, lending an assumption that these deliberate interactions were not fully scripted if at all. Anecdotes about Nina Simone, Jerry Lee Lewis, and Michael Hutchence delight music fans of all tastes simply because Cave and frequent artistic cohort Warren Ellis are so unabashedly enthusiastic to share them. And until the final sequence of “Jubilee Street” performed at the Sydney Opera House starts splicing in old concert footage from throughout Cave’s illustrious career, we don’t see one archival frame besides the static family photos Kirk Lake requests elaboration on for his sake and ours. There’s an experimental quality to the finished product that utilizes conventional rockstar biography sentiments in a fresh way. Think Nick Cave on Nick Cave reaching back in time with a few celebrity guests to help corroborate stories and expand upon them as personal details are shown with nuance—wife Susie Bick barely seen wrapped up in bed sheets with her back towards us to enhance a statement made later about her not liking her photograph taken or a visit with Ellis portraying the steps needed for preparing eel—and philosophies expressed with relish. It’s a softer side of this assumed wild man, ex-junkie who now wakes up, writes, eats, and writes some more before sitting with his twin boys to watch Scarface and eat pizza. Is it simply another persona known as Dad? Perhaps.

Those moments project a different intensity born from love—an example of which is gorgeously relayed through a visceral slideshow of sexual images flashing onscreen that hold some memory of love, lust, and romance all wrapped up into the woman he would marry. We get laughter, music, personal tales about his home life and the early days of stardom that have propelled him to great musical and cinematic heights (he wrote The Proposition and Lawless after all) shot with an eye for drama as a movie rather than behind the music cliché. This is the stuff fans would shell out cash for a special edition Blu-Ray with extra conversations between Cave and those he’s run across during his career. While many documentaries provide the life of an artist, very few succeed at showing his soul. This is one.