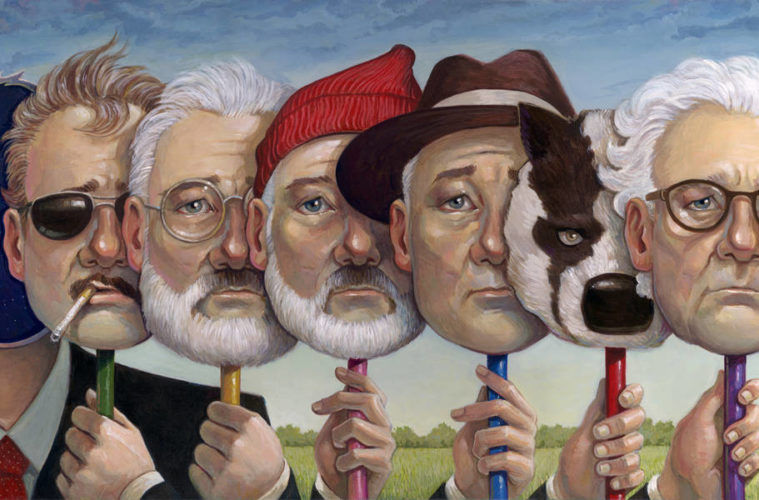 A nearly 600-page biography of a French filmmaker would not make every summer reading list, but any discerning cinephile will consider Éric Rohmer: A Biography. It’s one of several stunning recent releases, along with a weighty oral history of Star Trek, an intimate remembrance of Stanley Kubrick, and a fascinating breakdown of the great Suspiria. Now that’s an eclectic roster of beach reads. Even minor Star Trek fans will be spellbound by The Fifty-Year Mission, a stunning oral history from Edward Gross and Mark A. Altman. The first in a two-volume set — Volume Two, covering the last 25 years, will be released in late-August — is impressively comprehensive, and full of unforgettable stories. These include the original series rivalry between William Shatner and Leonard Nimoy, a situation that resulted in a fierce letter to both stars from creator Gene Roddenberry. (“Toss these pages in the air if you like, stomp off and be angry, it doesn’t meant that much since you’ve driven me to the edge of not giving a damn,” Roddenberry wrote.) Then there’s the chaotic making of Star Trek: The Motion Picture, with a “special effects debacle” that nearly derailed the project. And nothing tops the backstory of Shatner’s disastrous Star Trek V: The Final Frontier. (Access Hollywood’s Scott Mantz sums up the film’s legacy best: “What the hell was that? It was embarrassing.”) Volume One, which ends after the release of Star Trek VI, is stuffed with details, memories, and analysis. Fans will find it ridiculously compelling.

I’m not sure there is a lovelier collection of film texts than Abrams Books’ Wes Anderson series. The first two from the always insightful Matt Zoller Seitz, The Wes Anderson Collection and Wes Anderson: The Grand Budapest Hotel, were immaculately designed and stunningly perceptive looks at the Anderson oeuvre. The latest entry is Bad Dads: Art Inspired by the Films of Wes Anderson, and it’s the series’ most visually splendiferous book yet. Featuring work from Spoke Art Gallery’s traveling series (titled “Bad Dads”), it’s a wildly diverse collection of frame-worthy creations. As one would expect, there’s plenty of Murray, especially Zissou. But even less-heralded characters take center stage, including Bottle Rocket’s Kumar and The Royal Tenenbaums’ Dudley. The Fantastic Mr. Fox-inspired work is especially gorgeous, but my personal favorites are centered around Moonrise Kingdom. In fact, the portraits of young Sam and Suzy are so moving that the film — one I’ve always ranked low on the Anderson filmography — has new resonance for me. That’s the power of art, and of one wonderful book.

Stanley Kubrick and Me: Thirty Years at His Side by Emilio D’Alessandro, with Filippo Ulivieri (Arcade Publishing) One of the most intimate looks at Stanley Kubrick ever committed to paper has arrived thanks to his longtime personal assistant and friend Emilio D’Alessandro. Stanley Kubrick and Me: Thirty Years at His Side is an essential read for Kubrick fanatics, both as a rebuttal to many of the sillier rumors about the filmmaker’s personality and because it offers a treasure trove of behind-the-scenes details. Kubrick comes across as warm, loyal, and enormously particular. Many of D’Allesandri’s stories are humorous (Ryan O’Neal “was white as a sheet” after a drive with the former Formula Ford driver; Jack Nicholson “made faces at anyone who turned their back on him). Others are deeply moving (specifically his account of Kubrick’s funeral). All are wondrously told, and deeply felt.

The Caped Crusade: Batman and the Rise of Nerd Culture by Glen Weldon (Simon & Schuster)

As Glen Weldon’s The Caped Crusade: Batman and the Rise of Nerd Culture explains, the passionate (and often misguided) fan criticism that recently greeted Ghostbusters is not entirely unprecedented. The Dark Knight has inspired his own unique form of fandom, all culminating in our current level of cultural obsessiveness. As Weldon theorizes, “the culture has changed around Batman [and fans]; the wall between nerd and normal is now a thin, permeable membrane through which ideas like Batman flow freely back and forth.” The author’s understanding of the character’s essential “nerd-ness” makes for a hugely entertaining read. Just as essential is his breakdown of the Caped Crusader’s various incarnations. Interestingly, the outcry over the casting of Michael Keaton, for example, feels almost quaint next to the fanboy rage of today. As author Derek Schilling puts it on the back cover of Éric Rohmer: A Biography, “[t]his, the first biography of Rohmer (né Maurice Schérer), is likely also to be the last.” It’s hard to disagree, as the book by Antoine de de Baecque and Noël Herpe feels as comprehensive and definitive as any filmmaker bio ever written. It’s also an utterly enthralling read, traveling from his youth to his days in charge of Cahiers du cinema, the success of his “Moral Tales,” and the making of fascinating late works like The Lady and the Duke. While the stories behind the films are involving, the more intimate details stand out. These include the recounting of an event that took place just a few weeks before Rohmer’s death (in January 2010), as the then 89-year-old director sat on a bus with his faithful producer Françoise Etchegaray. “The tension was palpable,” as Etchegaray was set to leave Paris for two weeks. “[Rohmer] was gripped by fear at the idea of not finding anyone to accompany him on his trips [to the office]. … The two friends looked out in silence at Les Invalides, a monument Rohmer cherished above all other, which the bus was passing just then.” Rohmer suffered a stroke just two days later. It’s a sad, brief story, but the type of beautiful scene that makes Éric Rohmer: A Biography so memorable.

Independence Day: Resurgence came and went from theaters with remarkably little cultural impact. That does not mean, however, that the poorly received sequel is without interest. Regardless of the film’s status, Titan Books’ The Art & Making of Independence Day: Resurgence is worth a look. Nearly a third of the book focuses on the 1996 original, and that’s a surprising amount of space. However, the backstory makes one a bit more appreciative of the design work that went into ID:R. Does it make the experience of watching Resurgence any better? Not necessarily.  But it certainly makes for a nice companion.

Even those with a deep appreciation for film history can find difficult to fully grasp the level of Mickey Rooney’s stardom in the 1930s, when he was crowned the most popular actor in Hollywood. Some have only seen the later of the late Andy Hardy star’s more than 300 (!) film appearances. That makes The Essential Mickey Rooney by James L. Neibaur an important text. Neibaur analyzes 61 of his most interesting performances, from 1936’s The Devil Is a Sissy to 1979’s The Black Stallion. The author reminds us that Rooney was “one of the most durable, important, fascinating performers” in cinema history.

Author Alexandra Heller-Nicholas is a must-follower on Twitter (@suspirialex), and her background, as the author of texts like Rape-Revenge Films: A Critical Study and Found Footage Horror Films: Fear and the Appearance of Reality, makes her an ideal author in the “Devil’s Advocates” horror cinema series. In Suspiria, she takes a deep, probing and entertaining look at Dario Argento’s unparalleled 1976 masterpiece, and the director’s career as a whole. Heller-Nicholas’s insights — including analysis of its “fairy tale tone” and a cataloging of the film’s enduring legacy — add new dimensions to an oft-discussed classic. She captures what makes this “poetic, chaotic” favorite so special.

A diverse lineup of authors and writers — everyone from Neil Gaiman and Anthony Breznican to Brad Meltzer and Jodi Piccoult — chronicle their superhero love in Last Night, A Superhero Saved My Life. The most memorable? “On the Hulk: You Wouldn’t Like Me When I’m Angry” by Delilah S. Dawson. The author of Delilah S. Dawson is the writer of the Blud series and Servants of the Storm, among many other books and stories, tells a dark, personal story of growing up with an alcoholic father. She discovered her “inner Hulk,” and as adult, she is grateful for that. Her tale is just one highlight in a very unique book.

The Latest in Star Wars Lit The post-Force Awakens library continues to grow. First up is Star Wars Character Encyclopedia: Updated and Expanded (DK), an essential catalog of characters from the original trilogy, the prequels, and TFA. It is written by Simon Beecroft and Pablo Hidalgo — a.k.a., the man tasked with responding to your Snoke questions on Twitter — and offers unique facts about everyone from Ackbar to Zuckuss. It’s another treat for the SW obsessive. Star Wars: ABC-3PO (Disney-Lucasfilm Press) is also a treat, for SW obsessive parents and their children. Written by Calliope Glass and Caitlin Kennedy, and illustrated by Katie Cook, the book is a delightful mix of adorable illustrations and humorous rhymes. (“On the planet of Tatooine / In a palace none too clean / Lived Jabba the Hutt. / A creature whose gut / Was as giant as Jabba was mean.”) ABC-3PO is already a favorite of my two kids, ages 6 and 2. Lastly, two of the most recent Star Wars novels rank among the finest in the SW canon. Claudia Gray’s Bloodline (Del Rey) gives Leia Organa a focus that The Force Awakens could not, while Chuck Wendig’s Aftermath follow-up, Life Debt (Del Rey), turns the spotlight on Han Solo and Chewbacca. Bloodline provides crucial backstory to the post-Endor political strife that crippled the New Republic, while the action-heavy Life Debt sets the stage for the infamous Battle of Jakku. That conflict will be the focus of the third book in Wendig’s series, Empire’s End. It’s hard to find two novels that are more different than My Mad Fat Diary and Silence, but both are gripping reads. Shusako Endo’s Silence: A Novel (Picador), of course, arrives soon on the big screen thanks to the passion of Martin Scorsese. The filmmaker wrote the forward for this reissue of the 1969 classic, and his words provide the reader with an indication of the harrowing journey to come: “Silence is the story of a man who learns — so painfully — that God’s love is more mysterious than he knows.” Indeed, this story of two Jesuit priests in seventeenth century Japan is a very difficult read, but a wholly rewarding one as well. It’s easy to see the appeal this story had for Scorsese, especially its powerful ending. And now for something completely different… My Mad Fat Diary is a startlingly funny and bittersweet U.K. series currently airing on Hulu in the U.S., and the book it’s based on has finally earned an American release. Rae Earl’s memoir (St. Martin’s Press) is a touching coming-of-age story of piercing humor and relentless honesty. Call it a fun chaser after the upset of Silence.