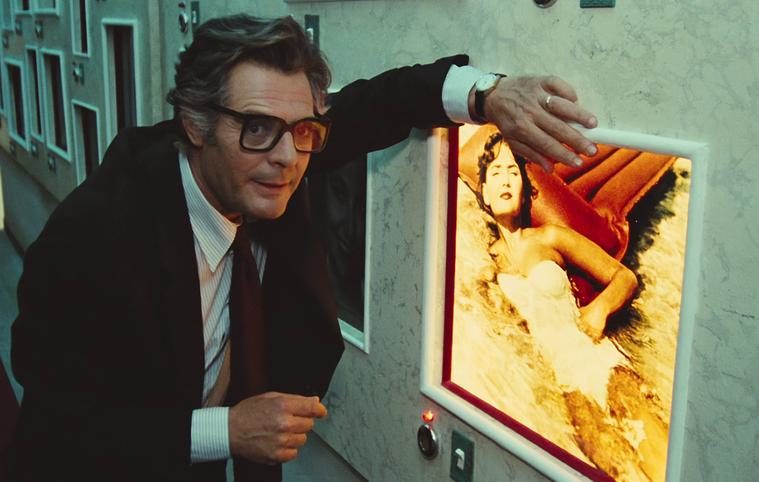 Federico Fellini‘s epic 1980 fantasia introduced the start of the Maestro’s delirious late period. A surrealist tour-de-force filmed on soundstages and locations alike, and overflowing with the same sensory (and sensual) invention heretofore found only in the classic movie-musicals (and Fellini’s own oeuvre), La città delle donne [City of Women] taps into the era’s restless youth culture, coalescing into nothing less than Fellini’s post-punk opus. Marcello Mastroianni appears as Fellini’s alter ego in a semi-reprise of his character from 8 1/2, Snàporaz. As though passing into a dream, the charismatic avatar finds himself initiated into a phantasmagoric world where women–or an idea of women–have taken power, and which is structured like an array of psychosexual set-pieces, culminating in a bravura hot-air balloon that decisively sticks the “anti” up into “climax.” – Official Synopsis

Horse Money is a different beast than Ossos, In Vanda’s Room, and Colossal Youth, the designated Fontainhas trilogy to which Horse Money provides a sort of epigraph. The film is most explicit with its interest in history, as it dramatizes the past extensively; but instead of focusing on a community, director Pedro Costa imparts allegorical and communal significance on an individual. As such, those bored by previous Costa films will find this is an entry point and a more streamlined approach. For all its hallucinatory and temporal digressions, it has a relative clarity that even allows newcomers to enter. At the same time, Costa’s thematic focus is sharper than ever, granting the story the same allegorical potency of previous films while also offering critiques of Eurozone neoliberalism through increasingly surrealist devices. – Forrest C.

While a low-budget feature shot in black-and-white on 16mm, the first installment of the trilogy contains a kind of sprawl not afforded to many today, filming on-location in New York, South Carolina, Germany, and the Netherlands. Yet this is wholly appropriate for the subject of a German photojournalist, Philip — played by Rudiger Vogler, who stars in every film of the trilogy — assigned with capturing America. Being past his deadline, there’s a palpable frustration over the dwindling romanticism of his trek: spending too much of his time in cheap hotel rooms watching television, at one point early in the film taking to destroying his set — even if it’s John Ford’s Young Mr. Lincoln gracing the screen. This predates a later sentiment by Wenders in his 1985 documentary Tokyo-Ga, on his own journey to capture a foreign land that inspired him so, that “every shitty television set has become the center of the world.” – Ethan V. (full feature)