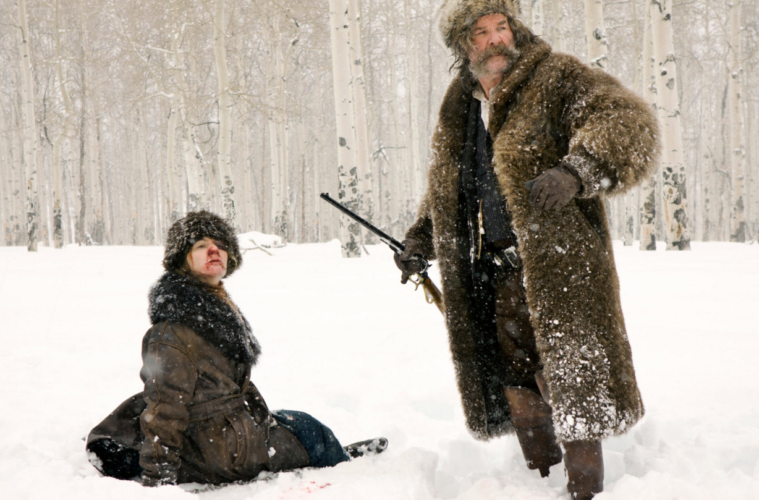 Read a Quentin Tarantino-Scripted Prologue Comic for ‘The Hateful Eight’

We’re only a little more than a month out from Quentin Tarantino’s latest opus, The Hateful Eight, but we’re finally starting to see some concrete information about both the plot and, more recently, the expansive rollout of Tarantino’s chamber western.

Last week, we wrote about the most recent trailer, which continued to tease the splatter-happy violence and machine-gun patter that has become Tarantino’s signature voice, but this week we have more information about how the preparation of screening the film on 70 millimeter came together. Tarantino’s passion about presenting the film in Ultra Panavision 70mm has been one of the talking points for nearly as long as the basic conceptual discussions about the plot.

The New York Times wrote about the scope of this project and the necessary preparations. Screening in 70mm on any number of screens is a sizable undertaking in itself, but, as has recently been revealed, The Hateful Eight will screen in 100 locations (96 in the states, 4 in Canada). According to the story, no film has opened with 100 70mm prints since 1992. For a sense of scale, even last year’s blockbuster space extravaganza Interstellar only screened in 11 locations on 70mm. The previous year, Paul Thomas Anderson’s The Master only made it to 16 screens.

In order to accomplish this massive goal of 100 screens, it’s reported that The Weinstein Company spent the last year-and-a-half making preparations to obtain, distribute, and refurbish projectors and lenses for individual theaters. The process was much more involved than it’s described here, but was a tremendous commitment for the company all the same., Budgets for this project were not disclosed, but after asking a person familiar with similar proceedings, the Times estimated that it could cost anywhere from $60,000 to $80,000 per screen, and that’s before accounting for labor costs.

Along with this exposé into the technical bumps that Hateful Eight needed to overcome to come to the screen, there’s equally exciting news today: the newly pornographic-less incarnation of Playboy announced that they would be publishing a short webcomic prologue to The Hateful Eight in their December issue, which hits newsstands this Friday. Tarantino scripted the comic himself, which is illustrated by Zach Meyer.

It’s a beautifully drawn, albeit brief snapshot of how three of the Hateful Eight – John Ruth (Kurt Russell), Major Marquis Warren (Samuel L. Jackson), and Daisy Domergue (Jennifer Jason Leigh) – first came into contact with each other. Replete with Tarantino’s usual crackerjack overlapping dialogue and gleeful misanthropy, it’s a welcome gateway into this world. Take a look at the full comic below.

In The Hateful Eight, set six or eight or twelve years after the Civil War, a stagecoach hurtles through the wintry Wyoming landscape. The passengers, bounty hunter John Ruth (Russell) and his fugitive Daisy Domergue (Leigh), race towards the town of Red Rock where Ruth, known in these parts as “The Hangman,” will bring Domergue to justice. Along the road, they encounter two strangers: Major Marquis Warren (Jackson), a black former union soldier turned infamous bounty hunter, and Chris Mannix (Goggins), a southern renegade who claims to be the town’s new Sheriff. Losing their lead on the blizzard, Ruth, Domergue, Warren and Mannix seek refuge at Minnie’s Haberdashery, a stagecoach stopover on a mountain pass. When they arrive at Minnie’s, they are greeted not by the proprietor but by four unfamiliar faces. Bob (Bichir), who’s taking care of Minnie’s while she’s visiting her mother, is holed up with Oswaldo Mobray (Roth), the hangman of Red Rock, cow-puncher Joe Gage (Madsen), and Confederate General Sanford Smithers (Dern). As the storm overtakes the mountainside stopover, our eight travelers come to learn they may not make it to Red Rock after all…

The Hateful Eight will open on December 25 in 100 as-of-yet-unspecified 70mm-equipped theaters; a wide release will follow on January 8, 2016.