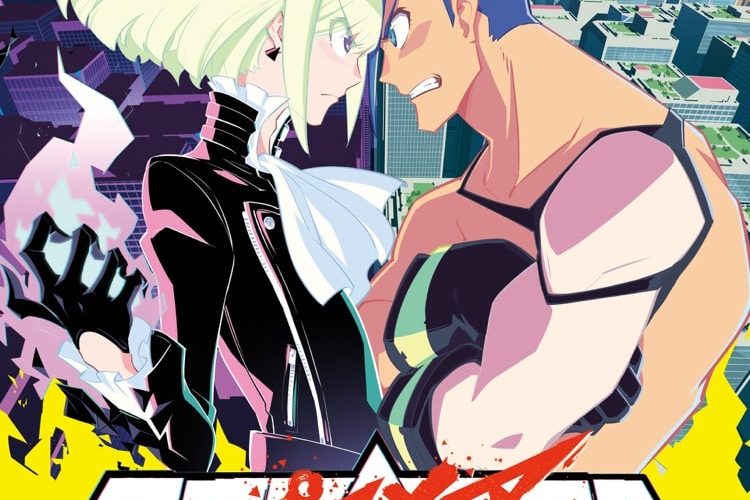 Hiroyuki Imaishi is–in the very best way–one of animation’s finest ambassadors of ADHD. His 2004 directorial debut, Dead Leaves, is a masterpiece of sci-fi action insanity: 50 minutes of delirious stylized motion, featuring ultra-angular “superflat” designs combining the most expressive deformities of Eastern and Western comics and cartoons; a psychedelic adrenaline rush that diffuses the full density of a pulpy jailbreak action flick into half the running time and several times the visual scope. It is the pure cinematic embodiment of a film viewer, and filmmaker, whose bountiful imagination strikes dynamite creative synthesis with a short-fuse attention span. Dead Leaves was a minor event at the time, consigned to direct-to-DVD release overseas and ultimately, perhaps, too aggressively weird and explicit to capture the fancy of either mainstream critics or otaku. But 15 years later, Imaishi–who found breakout success in TV anime and co-founded his own studio, Trigger–has become a known phenomenon among animation enthusiasts across the globe, and now returns to the big screen with his first original full feature.

Promare, another dizzying sci-fi action spectacle, takes place in a not-so-distant future where thousands of people spontaneously develop pyrokinetic powers which, triggered by people’s suppressed emotions reaching a literal blazing point, burn out of control in a devastating climate disaster that razes much of the developed world. (Feeling any anxiety about global warming?) 30 years later, in a futuristic neo-city of unspecified nationality (but modeled at least in part after New York), such pyro-sensitive individuals are labeled “Burnish,” stigmatized and hunted as terrorists by high-tech police units. Meanwhile, Galo Thymos (Kenichi Matsuyama in the original Japanese dub, Billy Kametz in English) is the gung-ho young star of the city’s firefighting force, another high-tech unit which combats Burnish blazes using futuristic gadgetry and fantastical robot armor suits. Galo idolizes the city’s Aryan-featured mayor and de facto superhero, Kray Foresight (Masato Sakai in Japanese, Crispin Freeman in English) but an encounter with a charismatic, effeminate Burnish leader named Lio Fotia (Taichi Saotome/Johnny Yong Bosch) leads him to start questioning his morals and allegiances.

If all this seems simultaneously formulaic and a lot to chew on, well… that’s just the first ten minutes. Screenwriter Kazuki Nakashima, who previously collaborated with Imaishi on hit TV series Tengen Toppa Gurren Lagann and Kill la Kill, revisits his well-tested formula of shuffling familiar genre tropes and hot-blooded heroes together with baffling absurdist twists in a parade of influences ranging from Japanese mecha anime and tokusatsu shows to Marvel Comics, Blade Runner and Arthur C. Clarke. In fact, Nakashima’s already eccentric tendencies feel conspicuously better geared toward television, and condensed into a feature-length runtime (111 minutes, still unusually long by animation standards) they produce something of an overstuffed narrative. Paced at breakneck speed, Promare’s extremely busy script crams in more characters, plot twists, and convoluted mythology than one film can seemingly handle without beginning to feel like an exhausting blur. In contrast to the viciously lean and even more surreal Dead Leaves–which, in its brevity, let the insane visuals handle much of the relevant storytelling–Promare must frequently douse the audience in reams of exposition just to give them the slightest hope of following its overly involved plot. No spoilers here, but so twisty and feverish is Promare’s narrative arc that it seems to completely shift in tone, and even subgenre, several times over before its mind-melting–and comprehension-defying–climax.

Not that Imaishi would ever dare bore us. Action sequences practically melt off the screen with searing kinetic energy, creating space and motion equally through stylized evocation and direct animation, as he demonstrates his mastery of making anime’s traditional limited movement techniques sing with carefully allotted fluidity of character movements and expressive “off-model” art, as composer Hiroyuki Sawano’s thundering electro-pop ballads pump grandiosity into every moment. Even in dialogue scenes, static shots cut fast, burst with color and showcase awe-inspiring compositional geometry and visual scope–all skills that Imaishi and his Trigger colleagues no doubt cultivated under their years of tutelage at the prodigious Studio Gainax, where they helped bring to life such masterpieces of pop imagery as Neon Genesis Evangelion and FLCL.

In addition to 2D digital assets, Imaishi also incorporates three-dimensional CG art with surprisingly seamless results. Whereas many animation studios’ attempts at incorporating three-dimensional CG modeling into traditional 2D animation produce jarring eyesores that don’t look or move like objects existing in the same universe, Promare mitigates the problem with an angular art style and super-saturated color scheme into which CG models can sneak virtually unnoticed, while he saves the obvious 3D modeling for frenetic 360-degree action pans which would otherwise be impossible to animate.

So is Promare legible to non-otaku? Yes and no. The convoluted sci-fi narrative is so steeped in the language of genre and fandom that laymen may find it impenetrable, but like its dapper firefighter hero, Imaishi’s infectious enthusiasm translates to gobsmacking visual spectacle with an obsessive visual imagination that’s hard to ignore. Many Japanese animators will ritualize the activation of a fantastical robot armor suit, but only Imaishi will preface it with an impossible, breathless tracking shot of the electric current surging from activation button through machinery to its destination. This is Imaishi’s world. Every cut, gesture, and line of dialogue here is punctuated by maximum comic book-style exclamation points. Every spectacular action feat is escalated several different times over the top, crossing from coolness through self-parody and back to coolness in a way that’s bound to make the attention-deficient among us stand up and cheer. Whether or not he’s consciously trying to reach a broader audience with his first big feature, Imaishi is as he always was: comprehension is optional, but fanboy delight is guaranteed.