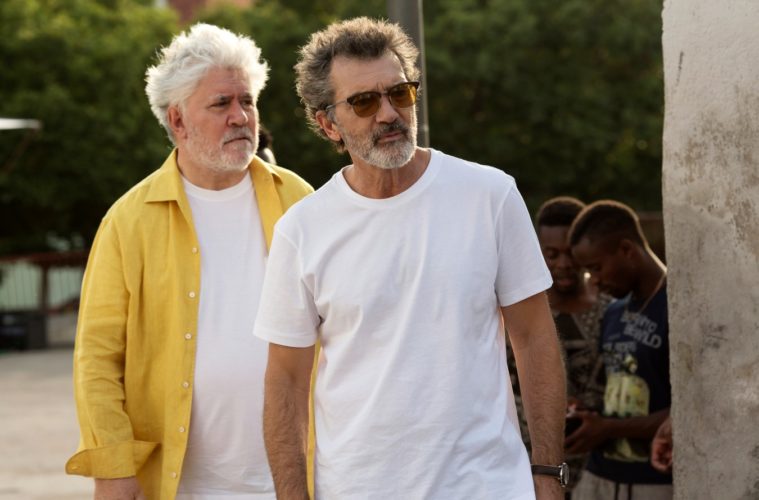 ‘Pain and Glory’ and the Art of Pedro Almodóvar’s World

In Pain and Glory, Pedro Almodóvar’s 21st feature and his eighth with Antonio Banderas, the star plays Salvador, an aging filmmaker struggling to continue working due to an oppressive cocktail of pain and his new habit for heroin. A repertory screening of his breakthrough film, Taste, gives way for Salvador to face various, unreconciled fragments of his past: his late mother’s chilly regard for him, his budding sexuality, and his first relationship, as well as a tumultuous friendship with an estranged collaborator.

Almodóvar’s cinema is an amass of messy folks in flux, like Women on the Verge of a Nervous Breakdown’s Pepa or Volver’s Raimunda, suddenly trying, the best way they know how, to pacify inharmonious, frayed strands of their lives. In an interview at the 72nd Cannes Film Festival, Banderas said this film, more than an addiction narrative, is about closing the circles and spaces that we’ve long left open. With Pain and Glory, the filmmaker continues a career-long testament to people’s ability to navigate these spaces through art, either as an experience, something they create or an apparatus for connection, such as the screening of Taste, which allows Salvador to reunite with the film’s star, Alberto, whom he had a falling out with on set.

During Almodóvar’s creative hot streak between 1999 and 2011, old films or new scripts based on old relationships routinely (re)connected characters with each other, most notably as the precipitating events of Bad Education and Broken Embraces, which stitch together dormant acquaintances exhuming the past for one another for the sake of gaining a better understanding of their current lives.

Since 1999, Almodóvar’s films have also become increasingly composed as narratives that weave in and out of the past, creating characters that are inextricable from little pockets of personal histories, often anchored by their experiences with works of art. Salvador claims to a friend that Taste (which at least one critic has called an analog for Law of Desire) plays better now than it did 30 years ago. She replies, “It’s your eyes that have changed, honey. The film is the same.” Art is fixed, but our lives aren’t, and sometimes, such as the case with a watercolor portrait Salvador comes across late in the film, it can feel like we found a work of art at just the right time.

In an essay for the collection All About Almodóvar, Despina Kakoudaki notes the specific importance of live art in Talk to Her. Two Pina Bausch ballets, including the one the film opens on, bring its two protagonists together. And, in one of the more moving moments in Almodóvar’s catalog, Dario Grandinelli’s character momentarily connects with his comatose lover during an outdoor performance of Caetano Veloso’s “Cucurrucucu Paloma.” The liveness of the art, Kakoudaki argues, “expand both the emotional logic of the film and its insistence that we are bound to each other through our participation in culture.” This sentiment could also be extended to the opening of Pain and Glory: Salvador’s mother and her fellow mothers of the village joining together in song while doing laundry by the creek. It’s a communal activity that Almodóvar presents with appreciation. In Almodóvar on Almodóvar, he called Talk to Her a celebration of storytelling. Javier Camara’s Benigno spends his days relaying to his comatosed patient, Alicia, everything he sees. “Storytelling is Benigno’s way of surrounding Alicia with everything she used to like before the coma, which as far as he knows was dance and cinema.” For Benigno, storytelling is so convincingly a means to connect, he’s persuaded himself of an entirely non-existent relationship between him and his patient.

In his fourth film, What Have I Done to Deserve This?, Almodóvar’s character’s are moved by cinema. When a grandma and her grandson go to see Elia Kazan’s Splendor in the Grass, they’re persuaded to leave the patriarchal, crime-riddled and drug-addled hellscape of Madrid and retreat home to their village. Kazan’s film made a significant impression on a young Almodóvar, “Even though my life was very different from the life of Natalie Wood and Warren Beatty and Barbara Loden, I felt very close to that. The movie talks about living in a small place, in a small community, where people can’t be free or express their feelings. I slept a lot with the character of Natalie Wood.”

Splendor in the Grass returns in Pain and Glory as a visual reference during an ode to childhood trips to the cinema in Alberto’s one-man show, Addiction, an adaptation of an old, unused script from Salvador’s hard drive. In attendance during Alberto’s performance of Addiction, which is an autobiographical piece for Salvador, is the filmmaker’s first love, Frederico, whom the story is largely based around. Frederico immediately recognizes that the narrative resembles his love affair with Salvador and uses it as a chance to track him down. What follows is an incredibly touching moment that contains the heart of Pain and Glory, and one that is made possible, again, through live performance and the creation of art.

Referencing the scene during a Cannes press conference, Almodóvar said he experienced a similar love in his life — one that was aborted, “When you have to separate from a person you still love, that is something that is not natural.” Like his protagonist, the filmmaker seems to be using his art to explore the possibility and beauty of finding reconciliation.

Before he explored the creative process in Pain and Glory, Almodóvar became interested in the presence of art in the artist’s life in films like The Flower of My Secret, Broken Embraces and The Skin I Live In. As something experienced, like live music or theater, art grants his characters access to myriad experiences, but as something created, Almodóvar uses art as a means of self-discovery rather than mere expression. Broken Embraces, a film about director Harry Caine grieving his lover and the lost reels of one of their old projects, offers the most tangible case. The film closes with the reel’s unearthing and Harry’s opportunity to reconnect with his lover through the process of editing together the once-unfinished film. It’s a literal discovery that gives way to a piece of his past long thought gone.

Though Broken Embraces is a film about a director and his film Girls and Suitcase, a clear riff on Women on the Verge of a Nervous Breakdown, it wasn’t met by the critical class with claims of autobiography on the same level of other works, particularly Bad Education, Volver, and now Pain and Glory. By the week following Pain and Glory’s appearance at Cannes (and two months after its world premiere in Spain), the phrase “his most personal film yet” was already well tread. I’m not sure how to quantify personal-ness from film to film for an artist, especially one who’s been making them under his own production company (facilitated by his brother Augustin Almodóvar) with no oversight for more than three decades. “Pedro is the freest artist on the planet,” Augustin once claimed.

However, Almodóvar has never had such an overt, recognizable avatar. Many reviewers have called Pain and Glory his 8 ½ (a tag also given to Bad Education), and I suppose the filmmaker eggs viewers into it with the French poster of Fellini’s film framed in clear view during a shot of his assistant’s office. But its usefulness only extends so far to say that Almodóvar has never given himself such a Guido Anselmi figure. His films have always been this personal and sincere, but Pain and Glory is the most cosmetically referential to Almodóvar’s current life — Salvador even lives in the filmmaker’s real-life apartment. “All my films talk about me,” he said at Cannes, “but I’d never made one with a main character that is a film director and that has some of my health conditions.”

As recent as this decade, Almodóvar made The Skin I Live In, a film that shares much of the same thematic impulses as Pain and Glory and that similarly pulls into view the twilight-adjacent period of the director’s life, but wasn’t host to the same claims of self-portraiture due, most likely, to its genre trappings and oblique approach to autofiction. The Skin I Live In

Instead of a filmmaker, The Skin I Live In is about an expert plastic surgeon obsessed with creating a new synthetic skin for his own prisoner, thereby physically recreating his lost wife. As Marvin D’Lugo and Kathleen M. Vernon point out in their book on Almodóvar, the film plays on the double meaning of pelicula, or celluloid, as simultaneously the artificial skin he builds and the cinema that Almodóvar makes. Moments where Banderas’ surgeon is consumed by the image of his prisoner on TV (via surveillance cameras) further crystallize this parallel.

The Skin I Live In, which marked the first reunion between Banderas and Almodóvar, is a visually cold film that eradicates the primary colors of his early work to showcase an aging man saddened by the past and obsessed over trying to reclaim it. Similar to Broken Embraces, although much more sadistic, the film ultimately posits that the past is ephemeral and unattainable, but perhaps there’s momentary hope through the works of art.

If the act of creating art in The Skin I Live In was a brief salve on the pain of loss, Almodóvar exhibits more resolve in Pain and Glory. Being able to make a new film is ultimately a hopeful act, but only because it’s Salvador’s only means of dealing with the parts of his past that he’s no longer able to rectify in person, particularly the relationship with his late mother. “Cinema is the only thing I have … the end and the means for me,” Almodóvar recently echoed to The Guardian, saying he’s gotten used to not needing other people. “I’ve let them go. I’ve cut them off. I suppose I could get them back if I wanted. But I’d need a spur. I’d need a reason.”

It’s hard to read his thoughts on the current press tour and not lapse into the convenient thinking that Pain and Glory is, in fact, his most personal film yet. It’s one that resembles so much of Almodóvar’s life, although most heartbreaking is how it diverges from it. Salvador, unlike Almodóvar, hasn’t cut people off from his life; he’s trying to break from the increasingly insular existence he’s made for himself, using art, both old and new, to reconnect with the ghosts of his past. If making Pain and Glory was Almodóvar’s own attempt at reconciliation, I hope he’s also managed to close a couple of circles.

Pain and Glory is now in limited release.