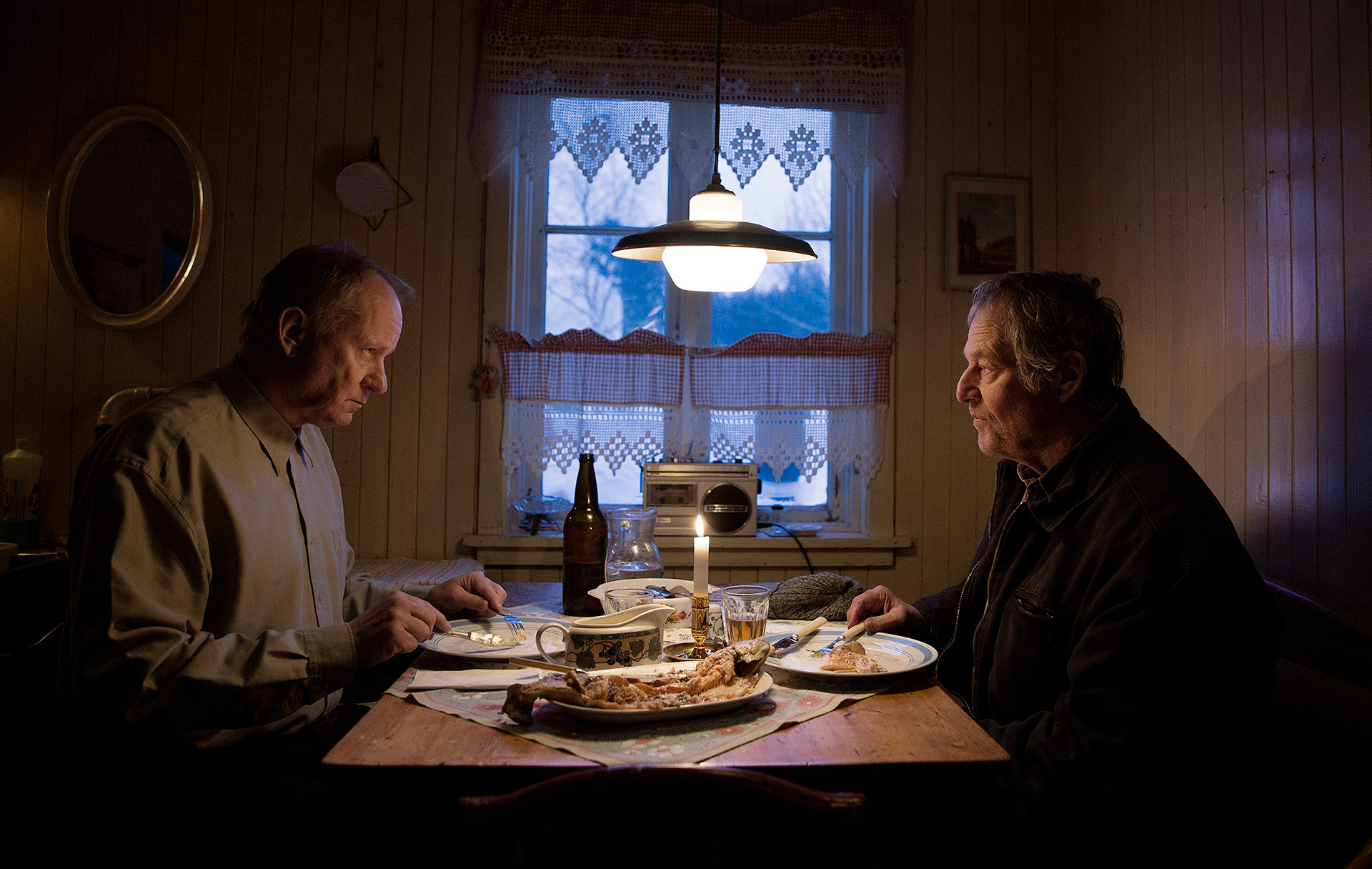 Tragedy strikes forty years after moving to Sweden and the loss is so profound that Trond (Stellan Skarsgård) discovers it difficult to continue on as before. When your life is changed so fully and abruptly, a desire to “pick up the pieces” very often pales in comparison to simply leaving them behind. Gone was his tether to the city and connection to his possessions. Gone was his sense of home itself. So he decides to leave and find another in the desolate countryside of Norway. Trond escapes an identity he’d spent decades cultivating to embrace the quiet of isolation instead. This is how he’ll survive the changing of the millennium alone. Rather than be reminded of who was missing during the inevitable celebrations, he’d go missing himself too.

Like everyone in Hans Petter Moland’s latest film Out Stealing Horses, Trond doesn’t want pity nor judgment. He merely wants to be left by himself to reclaim a sense of control devoid of urban noise and distraction. He seeks the comfort of a practical existence away from fancy suits and material wants—to get back to those days spent as a young teen in the country with his father (Tobias Santelmann). That in and of itself, however, has the potential to spark memories as painful as those of fate’s latest mishap. Life’s unfortunate inevitabilities cannot be avoided and happiness cannot be stolen. All we can do is accept our choices and the consequences arising from them. They make us who we are.

Author Per Petterson filled his acclaimed novel (upon which this is based) with many such moments of introspection and Moland does well to portray each one with a resonant objectivity despite never forgetting the breadth of emotion they also demand. Actions from Trond’s past suddenly rise to the forefront of his consciousness out of the depths of time to provide newfound context and meaning thanks to hindsight only life experience can supply. First it’s the familiarity of nature’s splendor flooding his mind. Then it’s the impossible coincidence of recognizing his similarly intentionally lonesome neighbor (Bjørn Floberg’s Lars) as a face from that same past felling trees with his father by a riverbank. Fondness, anger, excitement, and resentment take hold as Trond’s life folds in on itself.

We travel back and forth from the current winter of 1999 to the summer of 1948. We hear of tragic accidents leaving victims of circumstance dead and unwitting perpetrators scarred in both eras and watch as their commonality brings Trond understanding if not closure. How does what happened then impact how he copes with what’s happening now? And how does what’s happening now impact how he reconciles what happened then? To see an event from both the eyes of a child and those of an adult is to see two very different things. What was selfish then might now seem selfless and vice versa because positions have shifted and reasons have been made clearer. Our lives are full of duality. Leaving is arriving and pain is love.

Watch an exclusive clip above.

That last one is tough to comprehend in the moment. Trond’s father can tell him (Jon Ranes plays Skarsgård’s character at fifteen) that he has control over when he hurts once the boy explains why he’s avoided removing nettles as asked, but one can only understand what that control entails after they’ve experienced a hurt far greater than that of sharp leaves. We still don’t know what pain this man endured in his own life up to this point (we will soon courtesy of Gard B. Eidsvold’s Franz and tales of Nazis), but we see in his eyes that it’s extensive enough to need these summers away from the city and the life he built in its aftermath. Nothing is ever as simple as appearances seem.

This is true for young Jon’s (Sjur Vatne Brean) despondent behavior one morning when he and Trond were off to ride horses and it’s also true for the stolen glances shared between the former’s mother (Danica Curcic) and latter’s father. To view either with the naiveté of a child is to fear the unknown and rage against assumptions. To be Trond then is to dismiss Jon’s quiet suffering as an aberration rather than a profound expression of grief and the adults’ indiscretion as lustful rather than overdue. To think back now, however, is to see decisions he too has made. Trond has since learned that happiness often comes at the price of another left behind and that person’s anger has the potential to destroy and create.

One person’s joy is another’s heartbreak. One person’s choice to return is another’s destiny to leave forever. These are imperative notions bound to the progression of life amongst so many others. Their actions impact your path and yours impacts theirs. Your refusal to help during a moment of great importance could spark a chain reaction that has you suffering more than you could ever imagine. Your frantic desire to make good on a promise might find you neglecting it in a way that holds irrevocable consequences. One touch of a hand could break another’s leg. One’s decision to leave a loved one behind could be the thing that reminds them how much doing so will hurt. Not every decision, however, prevents you from making one of your own.

Maybe you’ll forget what happened to move on and grow or maybe you’ll never let it go. Either way it changes you. For better or worse is up to you because there’s hope in that certainty regardless of its intrinsic melancholy—a melancholy that permeates every frame of Moland’s film and can be felt with every note of Kaspar Kaae’s gorgeous score. By peering back, we can look forward. By changing who we are in response to tragedy, we can survive its devastation. And as Trond reveals, we can change ourselves more than once. We might not understand someone else’s choices in doing so, but that doesn’t mean their change isn’t necessary. Leave them be and make your own. Respect your hurt, but never let it control you.

Out Stealing Horses opens in select theaters and VOD on August 7.