TIFF Review: Murina is a Coming-of-Age Tale That Goes Beyond the Usual Tropes 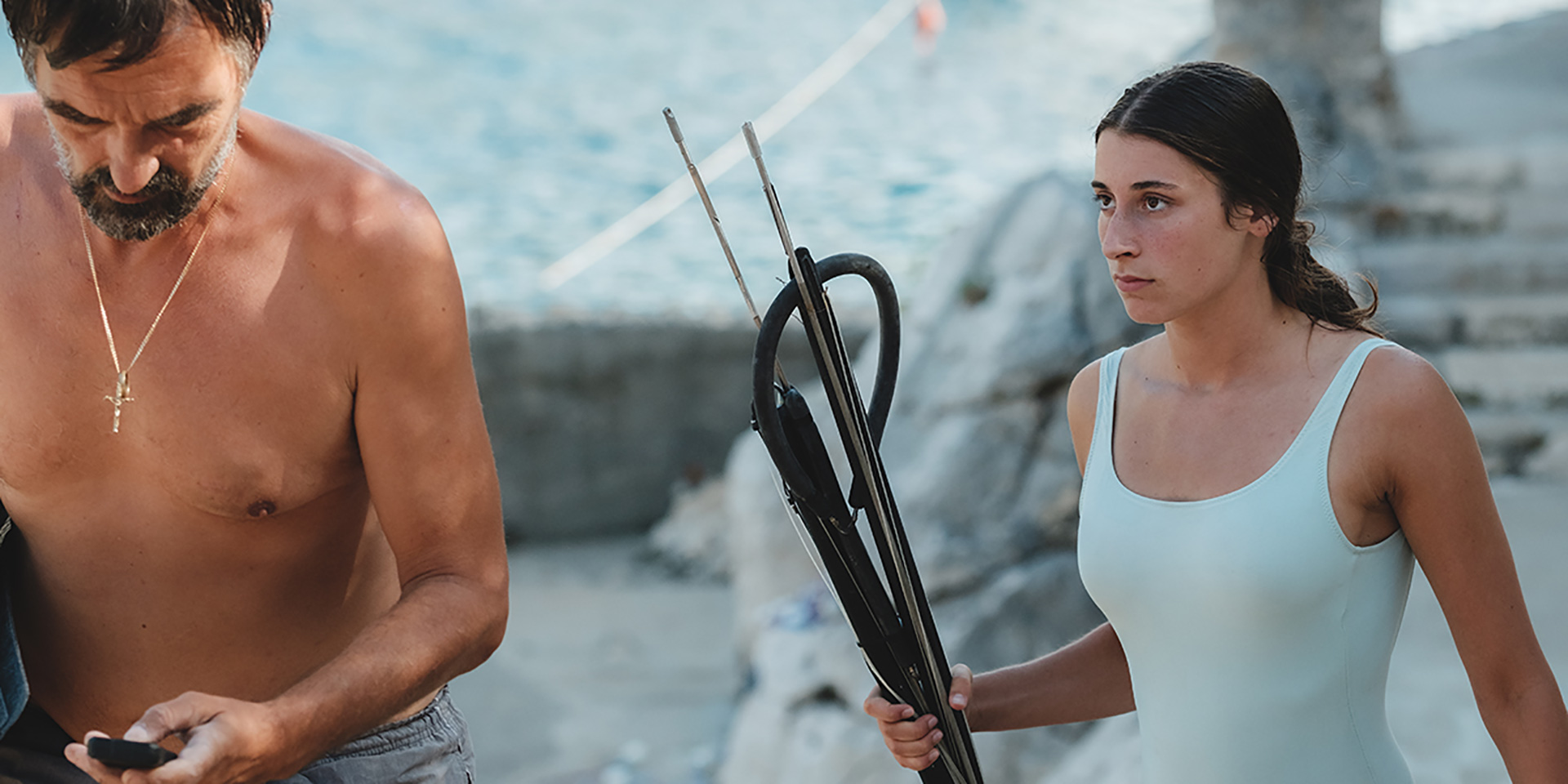 We often forget that exotic locales aren’t an escape for those living here. While co-eds dock ashore for sun, sex, and fun, families merely wake up early to go spearfishing so they have dinner that night. The psychological toll of constantly looking out your window at happy faces while dealing with the futility of teenage living under a domineering father with few (if any) opportunities to leave must be daunting. So when Julija (Gracija Filipovic) exits the water to see her father’s (Leon Lucev’s Ante) rich friend from a past life (Cliff Curtis’ Javi) has arrived, she wonders about the possibilities he brings. Ante and her mother (Danica Curcic’s Nela) hope to sell him land. Julija hopes he’ll save her.

And why shouldn’t she? Julija sees the way Javi looks at her mother (and the way she looks back). She also senses the jealousy harbored by Ante and how it’s eating away at him, while attempting to play nice for business turns his disposition even darker. In her eyes, this meeting is the answer to her prayers—Javi will be reminded of Nela’s beauty and Ante’s rage. He’ll jump at the chance to play knight in shining armor and give her everything he says she can have. What Julija doesn’t yet realize, due to age and the sheltered existence she’s thus far led, is that it’s all a game. Just as Ante puts on a smile, so too does Javi. It’s part of being in paradise.

Debut writer-director Antoneta Alamat Kusijanovic (and her co-writer Frank Graziano) mine this fact of life to ensure Murina proves a coming-of-age tale dealing with more than the usual tropes of puppy love, sexual awakening, and identity-building. Julija is being given a lesson on the hard-knock compromises of adulthood through her desire to believe in happily-ever-afters that simply do not exist. She’ll blame her father for being a domineering force of oppression. She’ll blame her mother for choosing to stay on the Croatian shore with him instead of sailing the world with Javi. And she’ll prop him up as this Adonis devoid of flaws despite appearances all being a matter of perception. Javi merely left his troubles at home to revel in his emancipation.

What’s better is Kusijanovic’s refusal to force those revelations onto her lead. She lets Julija be stubborn enough to risk destroying what her parents hope to achieve. The lessons are therefore ours to take. When Nela looks her daughter in the eye and says she has no idea all she’s done to protect her, Julija scoffs. We know, though. And we understand the love she has for Ante is stronger than the lust she harbors for Javi. The latter dynamic has always been about supply and demand: they flirt the few times they see each other because they know that’s all it will ever be. So to compare these men today—Ante crumbling under the weight of stress, Javi rejoicing in its absence—is beyond unfair.

Yet that’s what Julija must do. She’s a teen sick of feeling like her home is a prison. She wants to have fun, like the tourists off-shore, rather than be scolded and made to work—especially when enduring that struggle for so long has made her better than her father at certain tasks, leading him to belittle her about everything else. Ante is jealous, but not about Javi; he’s jealous about his daughter’s potential, and maybe he’s sabotaging her because of it. Julija knows the exact right buttons to push to knock her father off-balance; the more he embarrasses her in front of their guest, the more driven she is to go further into insolence than ever. And for what? Does Javi even care?

That’s the million-dollar question because he acts an impressive game in the knowledge he’ll never have to make good on what he says or does. With every passing day we discover new details about Ante and Javi’s past together, the reality that their easy laughter and camaraderie is more about performance than truth. If Julija’s parents had explained it all before he arrived, maybe her behavior would have changed. By keeping her in the dark so she could jump to conclusions using the superficial emotions swirling about, however, they have created the ticking time bomb that might blow this whole thing up. They shut her out to the point where escape is her only recourse; she’ll do whatever it takes to achieve it.

There’s no tougher education than first-hand experience and Murina gives it to Julija in spades. Because what happens if everything does implode? All her potential saviors raise anchor and sail back home to leave her stuck in purgatory once more. The crucial revelation is therefore the acknowledgement that no permanent change can ever occur unless you make it happen for yourself. Nela can’t save her from Ante, but she can supply protection. Javi can’t save her from Croatia, but he can plant the seed that she’s strong enough to survive without it. And a boy offering her drinks on the beach isn’t trying to be her hero. Julija will have to stand up to each of them and realize that taking what she wants leaves them all behind.

Accordingly the film possesses a tense atmosphere atop its beautiful locale—we’re never sure which emotion will rear its head louder than the rest. Will lust get the better of Nela and Javi to ignite Ante’s violence? Will Julija’s excitement have her going too far before inevitably ruining her own prospect of freedom? The onscreen duplicity resonates in a way that’s universal; we can see everyone’s winks, scowls, and hesitation as they try to keep the peace opposite Julija’s rising impatience towards pretending peace was ever feasible anyway. Curcic, Lucev, and Curtis are each great as they toe the line between desire and reality, but Filipovic outshines them all as the one character who still possesses hope. Her dreams could still come true.