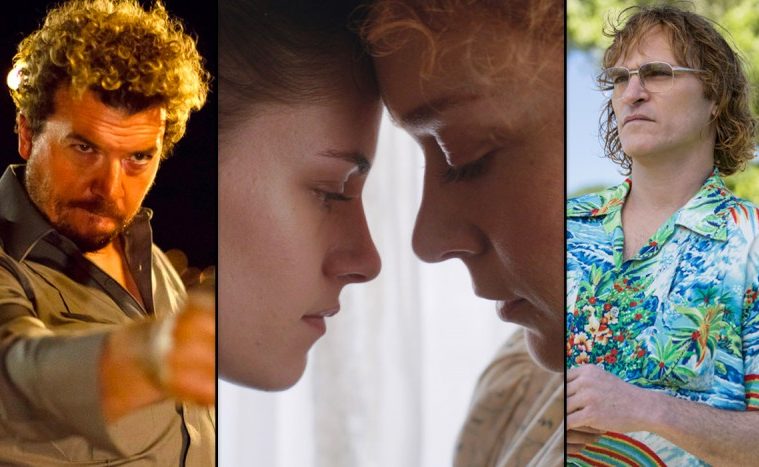 Our Most-Anticipated Films at the 2018 Sundance Film Festival

Comprising a considerable amount of our top 50 films of last year, Sundance Film Festival has proven to yield the first genuine look at what the year in cinema will bring. Now in its 40th iteration, we’ll be heading back to Park City this week, but before we do, it’s time to highlight the films we’re most looking forward to, including documentaries and narrative features from all around the world.

While much of the joy found in the festival comes from surprises throughout the event, below one will find our 16 most-anticipated titles. Check out everything below and for updates straight from the festival, make sure to follow us on Twitter (@TheFilmStage, @jpraup, @djmecca and @DanSchindel), and stay tuned to all of our coverage here. One can also see a trailer round-up of Sundance 2018 premieres here.

Catching our eye due to the peculiarity of the logline, Puzzle follows the immensely talented Kelly Macdonald as a housewife who discovers a newfound passion with… puzzle competitions. While this normally could be the kind of set-up of a twee, insufferable journey of self-discovery, one hopes that with a script by Oren Moverman (The Messenger, Rampart) there’s some depth and ingenuity to be mined here. Directed by longtime indie producer Marc Turtletaub (Loving, Little Miss Sunshine), it will have its world premiere a bit later in the festival on Tuesday, so check back for our review.

One of the early premieres at Sundance Film Festival could be a timely break-out. Directed by Reinaldo Marcus Green, who developed the project at the Sundance Institute Directors and Screenwriters Lab, Monsters and Men follows a Bed-Stuy man who captures a white police officer commit a wrongful murder in his neighborhood, and how he wrestles with bringing the footage to life as it may cause harm to his family. After bringing his short Stop to Sundance a few years back, could this be a Fruitvale Station-esque breakout for Green?

Following the true story of a woman who committed ax-wielding murders in Massachusetts in the late 1800s, Lizzie has got quite the hook. With Chloë Sevigny taking the lead role and Kristen Stewart playing her live-in maid, this has the makings of a daring look an little-known black mark in history. After a career-best performance in Personal Shopper, one hopes that Stewart continues her streak in this dark drama.

One of the most intriguing films in the Sundance line-up is NANCY, which marks the directorial debut of Christina Choe, who has earned acclaim with a number of short films. For her first feature, she’s recruited the talents of James Bond producers Barbara Broccoli and Michael G. Wilson in the story of a mid-30s woman who spins a web of falsehoods under an Internet persona and things spiral out of control when fact and fiction blur. Led by Andrea Riseborough, it promises to be a role of demanding complexity for the talented actress.

After delivering one of the funniest, most tear-inducing parodies of all-time with They Came Together, David Wain gave us two Wet Hot American Summer TV seasons, and now he’s finally back to feature films with a look at the early days of National Lampoon with A Futile and Stupid Gesture, which premieres at Sundance and hits Netflix soon after. Led by Will Forte and also starring Domhnall Gleeson, Thomas Lennon, Joel McHale, Matt Walsh, Paul Scheer, and many more, if this is a 1/10th as funny as his last film, it’ll be the best comedy of the year. You can say that again.

If this past fall has been any indication with Lady Bird, a Scott Rudin-produced directorial debut is something to look out for, particularly when it comes from a previously-established unique voice. With this whip-smart, carefully-articulated brand of comedy, Bo Burnham has amassed an impressive following in the past years and with Eighth Grade he makes his first step behind the camera in feature form. Telling the story of middle school anxieties through the 13-year-old Kayla Day (Elsie Fisher, poised for a breakout), if Burnham can effectively translate his incisive humor to the big screen, this could be one of the highlights of the festival.

Is there a once-celebrated director in Hollywood that’s in need of some acclaim more than Gus Van Sant? After the forgotten Restless, the perfectly fine, but forgettable Promised Land, and infamously derided The Sea of Trees, it’s been a rough decade for the helmer. This Sundance, he’ll hopefully bring a return to form with Don’t Worry, He Won’t Get Far On Foot. Starring Joaquin Phoenix in the lead role, as well as Rooney Mara, Jonah Hill, and Jack Black, the biopic follows the life of John Callahan, a quadriplegic cartoonist. With this exquisite cast, hopefully Gus Van Sant gets his mojo back.

While we hoped Jody Hill’s newest feature might finally make its debut at Sundance this year, another Danny McBride-led feature should suffice–and, even more intriguing, it’s in the Midnight section. Arizona marks the directorial debut of Vice Principals producer Jonathan Watson and follows McBride’s character during the late aughts housing crisis as he fights back in violent ways against losing his house. His victim is a single mom played by Rosemarie DeWitt, who is having financial problems of her own. Hopefully taking less of a sadistic route and more of a impressively-scripted dark comedy, the film also features small turns by Seth Rogen and Kaitlin Olson.

Last year marked a decade since the release of The Savages, the second feature from Slums of Beverly Hills director Tamara Jenkins. Starring Laura Linney and Philip Seymour Hoffman, it was a powerfully-acted, perceptive look at familial struggle, and we’ve been waiting ever since for her follow-up. 10 years later, it is finally coming. Financed and distributed by Netflix, Private Life stars Paul Giamatti, Kathryn Hahn, Molly Shannon, and John Carroll Lynch. Jenkins’ script follows a married couple (Giamatti and Hahn) who are struggling with infertility and its damaging effect on their relationship, but when their niece offers up her eggs, things change. Shannon, who picked up an Indie Spirit award for Other People last year, will play the niece’s mother, while Lynch plays Giamatti’s brother and Shannon’s husband.

Based on the YA novel by Emily Danforth, The Miseducation of Cameron Post follows a high school student played by Chloë Grace Moretz who is forced into gay-conversion therapy when she is caught having sex with her best friend. It’s the second film by director Desiree Akhavan who took her time following-up her 2014 Sundance hit Appropriate Behavior. “I could have made a second feature much earlier, it just would have sucked and I wouldn’t have made a third one,” Akhavan told Indiewire. Miseducation is slated for a Sundance premiere, so check back for our review soon. – Josh E.

In the span of just a decade, Paul Dano has worked with the likes of Paul Thomas Anderson, Spike Jonze, Ang Lee, Kelly Reichardt, Steve McQueen, Denis Villeneuve, Bong Joon-ho, Rian Johnson, and more. Presumably learning a thing or two from this batch of talented directors, he’s now making his debut behind the camera with Wildlife. The script, penned by Zoe Kazan and Dano himself, is adapted from the 1990 coming-of-age novel by Richard Ford, following a boy who watches his parents marriage unravel after a move and his mom falls in love with another man. Dano’s Prisoners and forthcoming Okja co-star Jake Gyllenhaal leads the film alongside Carey Mulligan, and it’s set for a Sundance premiere. The most intriguing aspect? It’s shot by Cemetery of Splendor and Neon Bull cinematographer Diego García.

With a pair of celebrated features a few years back (Thou Wast Mild and Lovely, Butter on the Latch), Josephine Decker is finally returning with her first narrative feature this year with Madeline’s Madeline. Sporting the best synopsis of the festival (Madeline got the part! She’s going to play the lead in a theater piece! Except the lead wears sweatpants like Madeline’s. And has a cat like Madeline’s. And is holding a steaming hot iron next to her mother’s face – like Madeline is.), this looks to be an illuminating, expressive look at crossing the lines of art and life.

After her Sundance-winning drama Winter’s Bone, which also served as a break-out for Jennifer Lawrence, Debra Granik is returning to the festival eight years later with Leave No Trace. Starring Ben Foster and newcomer Thomasin Harcourt McKenzie who live off the grid in Portland, but when the government meddles in their peaceful existence, they must confront their way of life. With Foster’s intensity and the promise of another breakthrough performance, not to mention Granik’s authentic touch of location, this has the makings of one of the year’s best dramas.

A staple at on the independent film circuit for as much as his editing skills (Golden Exits, Listen Up Philip, Queen of Earth) as his astoundingly revelatory features (Kate Plays Christine, Actress), Robert Greene returns to Sundance this year with Bisbee ‘17. With a dual meaning, the title refers to the Bisbee Deportation of 1917–in which 1,200 miners on strike were forced out of their homes and left in the desert to perish–and a century later, in which the community of the Arizona town stage recreations of the strike. As conflicts arise amongst the townspeople, we expect another personal, meta portrait from the documentary-meets-narrative filmmaker, this time of past strife and present reconciliation.

The Zellner brothers’ gently melancholic stranger than fiction yarn, Kumiko, the Treasure Hunter, didn’t quite make them household names, but it was at least enough to attract the attention of Robert Pattinson, who in 2018 continues his world conquering tour in films from auteurs the world over. One of four roles this year, Damsel follows Pattinson as a businessman traveling west to join his fiancée played by Mia Wasikowska. Narrative details are scarce, but given the filmmaker’s distinctively quirky voice, one can expect an off-kilter and unique take on a time-worn story. – Michael S.

In 2010, Panos Cosmatos seemingly came out of nowhere when he unveiled his feature debut Beyond the Black Rainbow, a baffling homage to ‘80s genre titles that emphasized its surreal tone and striking visuals over narrative and plot. It’s a film that seared itself into the brains of almost everyone who saw it, and yet Cosmatos has taken eight years to finally make a new film. Taking place in 1983 (the same year Black Rainbow took place), Mandy stars Nicolas Cage as a man seeking vengeance against a biker gang that killed his true love (Andrea Riseborough). It sounds like Cosmatos doing his own version of Mad Max, and with a midnight Sundance premiere on the first Friday, we won’t have to wait too long to hear how this film stands up next to his promising debut. – C.J. P.

Lastly, there’s also the Spotlight section, which features a number of previously festival premieres, including You Were Never Really Here, The Rider, Foxtrot and The Death of Stalin.