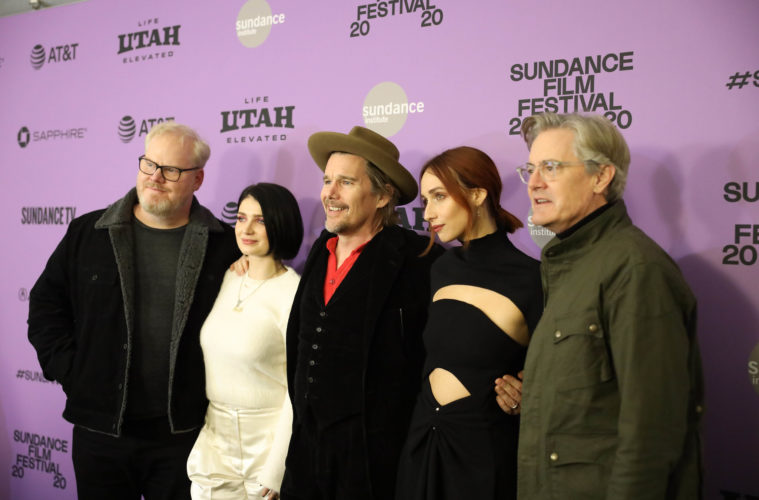 It’s the morning after the premiere of Tesla, the new film from Michael Almereyda starring his frequent collaborator Ethan Hawke as the titular inventor. I’m sitting with the writer/director at a restaurant in the center of the Sundance Film Festival, also joined by Eve Hewson and Jim Gaffigan. Both have hefty roles in the film. Hewson plays Tesla’s almost-lover Anne Morgan while Gaffigan plays entrepreneur George Westinghouse. As we all order some breakfast, Almereyda starts in on the origins of this long-gestating project.

[Note: This interview has been edited for clarity and length.]

Michael Almereyda: The percolation [of Tesla] was lengthy. And in a way… I can just acknowledge that it is the first script I wrote. It was optioned in 1983 but never made. Jerzy Skolimowski, the great Polish director, was going to do it. I was flown to London…

We’re briefly interrupted to clarify our food orders. As Gaffigan confirms his breakfast to the waitress, she asks “links or patties” in regards to the sausage. The comedian turns to me, stone serious: “What are you going to do?” I laugh, and before I can respond he’s chosen links. After some more food-based deliberation, we get back to 1983.

Almereyda: …Skolimowski had the idea that his friend Jack Nicholson would play [Nikola] Tesla. And that was sort of fanciful and the movie fell apart. I kept thinking about it but it wasn’t an active project. [That is] until one of the producers of my last movie asked: “What else have you got?” And when he read the script he had this notion that it was time to tell that story. But the script as it existed is violently different from what emerged. And that’s partly the result of recognizing the new information of Tesla since I first got acquainted with him and the world is a different place. The budget I was writing for when I was young was not the budget available.

The Film Stage: I was going to ask. With Experimenter, there’s a similar…

There’s anachronisms and what not. It’s part of the style.

“Everybody survive?” asks another voice from the end of the table. It’s Ethan Hawke, on his way to discuss the competing films with his fellow jury members. When told we were in the middle of an interview, Hawke commented: “Oh great, how’s it going? Are you guys saying interesting things?

Before long, Hawke’s gone. I bring it back to the question of budget in reference to the style of Tesla and if it the limitations in scope factored into changes to the screenplay.

Almereyda: Sure, but the more significant change had to do with recognizing that Tesla’s life has a strange absence of romantic involvements. I had fabricated one in my original script…It was just made up to make it more interesting and to fulfill my own romantic ideas of this figure. And it was embarrassing when I re-read the script, to be honest. It was a script that got me an agent and got me attention but there are elements of it that I regret. And in recognizing that [Tesla] didn’t have romantic relationships, that opens the door into questions of why and what kind of inner life he had. But he did have this sort of courtship dance with Anne Morgan and with a few other women. But Anne Morgan seemed most tantalizing because of her father’s involvement (Anne’s father was J.P. Morgan, who financed Tesla in 1900). So that became the real structure. The scenes with Jim [Gaffigan] as George Westinghouse are basically the scenes I wrote when I was twenty [years old].

Jim, how did you become involved with the project and what was your knowledge of Tesla before this?

Jim Gaffigan: I had worked with Michael in Experimenter, and Tesla is a fascinating mythological figure, right? And among those inventing geniuses he’s a good guy! So you’re fascinated by the complexity and how he’s eccentric. And George Westinghouse was this titan, one of these titans, like J.P. Morgan and Warren Buffet and Jeff Bezos and Elon Musk, you know? Where there’s history [in the film] and there is also what Michael adds in the script–and also how he directs it–which is motivated by humanity: [The question of] whether Westinghouse screwed over Tesla. We’ll plant the seed and leave it up to the audience, which is what I like. Look, was Westinghouse a bad guy for what he did? (Convincing Tesla to tear up a royalty contract worth a fortune). Yes. But when you play a character you can only root for them. So you rationalize it. Look, the guy was going to lose his whole business. And if you look at the course of Tesla’s life, he’s the beneficiary of working with Westinghouse as opposed to some of the other scoundrels. And Westinghouse is probably one of the only people that made money out of [Tesla].

Eve, same question I asked Jim. How’d you find yourself involved with Tesla and what was your relationship to the real guy?

Eve Hewson: I knew enough about Tesla, not as much as I know now. I have to say I still fully don’t understand everything. [Laughs.] But they sent me the script and I Skyped with Michael and I signed on. Jim and Ethan and Kyle [MacLachlan, who plays Thomas Edison] were already attached I think.

Almereyda: We were just waiting for you.

Hewson: I like working with people I admire and I feel like you’re going to learn a lot if you do it. And I did!

So here you are almost playing dual roles. You’re playing Anne Morgan and then you’re basically narrating the movie, guiding the audience along. When you’re reading the script and prepping are you thinking of it as two different roles?

Hewson: [The narrator] is Anne but [Michael and I] had a conversation where it is sort of separated. This woman is telling you a story about someone that she knew, that she loved. And I think the idea of her being the narrator is that she truly believed in him and truly loved him and he kicked her to the curb. So you’re getting a look into his life from someone who adored him instead of just history books.

Almereyda: I tried to personalize the voiceover so it’s not like you’re getting what you’re reading.

Hewson: Yeah, and she has an opinion on Sarah Bernhardt (The famous French actress who has a non-starting relationship with Tesla as well in the movie). It’s a different take on the regular biography.

It’s such an American story in its portrayal of capitalism. If Tesla had had Edison’s drive for business–

Almereyda: He had the drive, just not the practicality.

Right, practicality. There’s even a line in the movie…

Almereyda: …about capitalism and idealism.

Right, exactly. Was that something you wanted to tackle head-on in the film? There is so much style but that element feels–

Almereyda: It’s good to be explicit once in a while. There’s an early line in the movie where they’re talking about crazy drawers? I think the movie is a crazy drawer. I just put a lot of stuff from my life, things I read, things that are meaningful to me. And it is a jumble but I hope it’s a purposeful one. Usually, the crazy drawer had things you needed, somehow. But that’s how I think of this movie.

Gaffigan: We called it a junk drawer.

Gaffigan: Can I say in the defense of–look, I love talking about stuff like this so just tell me to shut up–I think that there’s also timing and a place. You know, the timing of Tesla. He was bad at business, tearing up that contract was insane. Even if it is symbolic. He could have gotten a lawyer…

Almereyda: Yeah I didn’t fabricate much in the movie unless Anne Morgan tells you it’s fabricated.

Gaffigan: The movie presents this question of the advance of humanity versus commerce. What does commerce have to do with this? But there is also questions of could Tesla have done any of this without money? Do you know what I mean? Without Westinghouse as an investor, really this film should be about Westinghouse.

Gaffigan: No, but Westinghouse was this inventor who had money that was motivated by making money. If Tesla hadn’t come across him, you know…

Almereyda: It’s a line in the movie: “No one else had the resources or the guts.” It really was perfect. Westinghouse was really tough and upfront.

Gaffigan: I love the fact that there were these alternative scenes where it’s “That scene didn’t happen.” If you’re Thomas Edison and you had an employee like Tesla, then suddenly your employee that you found annoying and weird is one-upping you. Do you know what I mean? It’s like if you have the ego of Thomas Edison what are you going to do? And you’re also from Jersey. (In a heavy Jersey accent): In Jersey, we don’t put up with that shit!

So Eve, in researching Anne Morgan, what did you gather from research given that she’s not as well known as these other real-life characters?

Hewson: I really didn’t. It was our own interpretation.

Almereyda: We had to invent her. As a young woman, she’s not documented. She became someone formidable and I think we could use that as an aim of where this woman’s heading because the real Anne Morgan became a real fascinating, self-possessed and generous person. But that was fifteen or twenty years after [the events of this film].

Hewson: [To pursue] the things that she did like, she moved to the south of France, took up a lover who was a woman, you know? She did her own thing. She was going to be her own person however she was going to do it. And I think that was important for her force in the story. She was going after [Tesla], she wanted him. She was very intense.