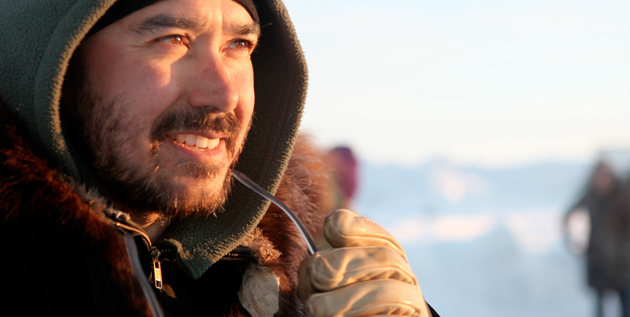 Crowdfunded Cinema is a column at The Film Stage that focuses on filmmakers seeking funding for projects via crowdfunding platforms, offering new ways for independent artists and audiences to connect. With each article, we will focus on a single project that we find particularly interesting and inspiring.

This past January, Andrew Okpeaha MacLean premiered his film On The Ice at the Sundance Film Festival. The film, a suspenseful feature-length drama about two teenage boys in an isolated Alaskan town dealing with the aftermath of a tragic accident, went on to experience a successful festival circuit. It won a number of awards, including winning the Best First Feature award as well as the Crystal Bear at the 2011 Berlinale, as well as the FIPRESCI Prize for Best New American Film at the Seattle International Film Festival.

However, not wanting to opt for a traditional limited release, which would limit the film’s exposure to cities such as New York and Los Angeles, the film’s creative team are making use of the Sundance Institute’s Artist Services Initiative. Using this approach, they will take advantage of a more dynamic distribution platform, expanding the film is able to reach. To do this properly, they are currently raising funds on Kickstarter.

We spoke with director Andrew Okpeaha MacLean recently to discuss the project, and were left inspired and excited to see the film find its way to audiences throughout the world. In addition to reading his interview, we’d also like to encourage reader’s to visit the film’s Kickstarter page for more information about this new project. And, as great projects come from great support, please consider donating and becoming involved. The goal is $80k, but the more they make, the more places the film can go.

Please read on for our interview with Andrew Okpeaha MacLean:

TFS: In your own words, what is this film about, and what inspired you to tell this story?

MacLean: The film is called On the Ice, it’s set up in my hometown of Barrow, Alaska, and it’s based on a short film I made a few years ago called Sikumi. That film explored the theme of violence and the reaction to violence from the characters, as well as the moral, cultural background; how would these characters respond to violence both as people, but also specifically as Iñupiaq people? So, that same theme and those same questions are the heart of the feature.

The feature is fairly different in that characters are younger; they’re teenagers rather than being grown men. It’s also more contemporary; instead of driving dog teams, they’re driving snowmobiles around. It became a really close look at the lives of young adults in rural Alaska, and some of the issues they’re going through. It touches on themes of drug and alcohol abuse, and the community’s reaction to that, as well as the family’s reaction to that.

I really wanted to make something that dealt with issues that were relevant to what’s going on in the arctic right now, and would confront some of those things. That was in my mind as I was writing the piece. This was your first feature; how did you go about raising funds to make the film?

I got very lucky, I think. The short did very well, it won the prize at Sundance back in 2008 for short films, and then the feature went though the [Sundance] lab program. That is a huge help; it just gives an air of legitimacy to a project, and it’s a great intro into the industry and to financiers. It’s a lot easier going to people and saying, “I have this project, it’s a Sundance lab film. Will you read it? Will you consider it?” It just opens doors like that.

Then, we managed to raise quite a bit of money for in-kind donations that were non-recuperabile, stuff that we weren’t going to have to pay back. Places like ASRC, which is the local native corporation up in Barrow, and from other sources within the community. There were things, like lodging for entire cast and crew of the film for the entire shoot. Those added up to quite a bit of money, and just having that as kind of a launching pad, really lowered the amount of equity money (cash), that we were going to have to raise, which is a huge bonus.

Then, for the equity money, it was just our producers getting out there and finding people who were interested in backing projects. We just approached a number of different financiers, or people that had money that they were interested in investing, and we cobbled together about four or five people, whom none of them came in for more than a quarter or third of the total equity. That was the producers, Cara Marcous and Lynette Howell who made that happen.

They actually met during the Sundance Producers Lab; Lynette was one of the advisors at the lab and Cara, who was already attached to the project, went through that lab as a participant.

After having success on the festival circuit, did it surprise you how difficult it was to get distribution?

Yes and no. I knew from the beginning that there was going to be a lot of challenges associated with this film. There are no celebrities in it at all, there aren’t even experienced actors, they’re all basically first-time actors, and it’s an entirely Inuit cast. Those things I knew were going to make it somewhat of a challenge.

I was somewhat surprised, given the festival success we had; I thought it might translate into something more, especially given the two wins at Berlin. Winning the first feature prize at Berlin, it’s a pretty major award, and I had hoped that would translate into some interest, but it didn’t.

We had some interest, we had some offers from people, but they weren’t offers that we thought were really exploiting what we think the audience of the film really is. So, we wanted a chance to see if we could figure it out ourselves. We know that there are a grassroots base of people who are excited about the film, and want to see it, and a lot of them are in markets that aren’t usually part of a distribution deal for a film of this size. You get offers on a film of this size that says: we’ll put it up in New York and we’ll put it up in L.A. for a week or two weeks, and then we’ll start selling it online and selling the DVD. But we thought we could take it to places that are a bit non-traditional; we could take it to Alaska and do a theatrical release up there, we could take it to other markets we’ve researched or we have ties in, or the film has ties in, that we think the film can find an audience base there.

So that’s why we were pretty jazzed and pretty excited when we heard about the Sundance Artists Service Initiative, it seemed like a really exciting thing to explore. Being able to do a self-release, with the kind of control you have over that, while at the same time getting a pretty significant level of institutional support. Backing, not financial backing, but just expertise, and the kind of standing in the industry that an organization like Sundance has, it just seems like a great opportunity, so we jumped on it.

Is this your first time using a crowdfunding source like Kickstarter? If so, why did you choose to go about fundraising via this means?

We used a somewhat similar crowdsourcing tool in order to raise money to cover some of the festival costs, specifically some of the costs from Sundance, our debut. That was through the United States Artists Organization. They are a more curated version of it, but it’s still crowdsourcing, and we used that to pay for things like flying the lead actors down from Alaska, so they could come to the festival to be with us. We used some of the money for publicists and some of those expenses.

But, we’re using Kickstarter for this for a couple of reasons. It’s really established itself with a track record of being able to raise money for film projects in various stages. I just had a friend of mine, Aurora Cavero, who raised money for her film, and she was able to raise quite a bit of money from it. It’s a tool that’s being used in the industry, and Sundance has a relationship with them, and so by going with Artist Services, we were pointed in Kickstarter’s direction anyways.

Also, we’re raising this money to do it, because we’re trying to do something that’s so new. We need to have a base of money that gives us the freedom to do that, so the fact it’s non-recuperabile helps us out and allows us to experiment in this kind of way.

One of the fun things about raising funds this way is that you get to have pledge levels to entice people to give. Can you talk a bit about a few of the rewards for supporters?

We have a bunch of different things, and they’re really all over the map. There are things like a digital download of the movie, you can pre-order the dvd, as a part of this. As you start to climb up in the donation level, you get to some really interesting rewards, such as spending a day on set with producer Lynette Howell; she’s working on a film right now that’s staring Ryan Gosling [called The Place Beyond the Pines], and she’s offering for people who donate at one of the higher levels a chance to come and spend a day on set with her. I think that’s pretty interesting, it could be pretty intriguing for a lot of people.

If you donate at the $5500 level, then we’re offering a guided tour of Barrow, if you can manage to get yourself out there, with Cara and myself, and included in that is a day spent dog-mushing with the team of dogs featured in Sikumi, the short film. It’s a dog team that’s mushed to the north pole and back, and it’s really a fantastic experience, a once in a lifetime kind of thing. So I think there’s a lot of really unique opportunities in that, and I think it would be really awesome if some people decided they wanted to go dogmushing up in northern Alaska.

It’s also cool to have the downloads and dvds as rewards, because in a way the fundraising campaign itself ends up becoming part of your distribution plan.

Exactly, and I think it’s really valuable. There’s a way you can look at it in that you’re just pre-ordering the dvd, and you get real value for it; you want to support the film and make sure it comes out, and as a part of that, you actually get the film. I think it makes perfect sense.