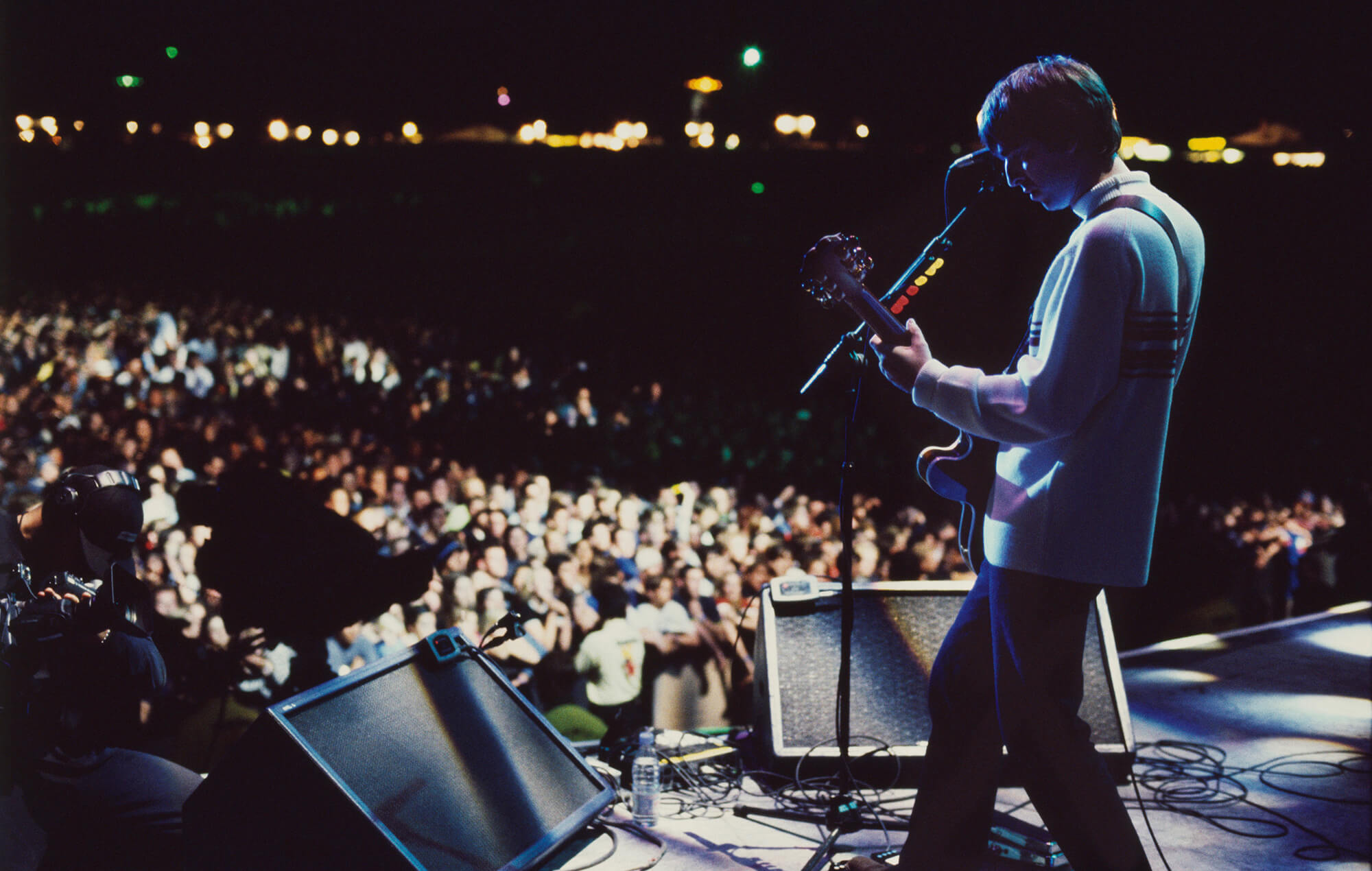 There are multiple moments during Oasis Knebworth 1996, the hugely entertaining documentary revisiting the Britpop legends’ most gargantuan concert, when present-day interviewees remark how lovely it was that the show occurred pre-iPhone, Facebook, etc. Yes, it is the “Not a cell phone in sight. Just people living in the moment” meme brought to life. And in this instance it’s hard to disagree. The audience was not littered with screens. There were no social media platforms overflowing with attendee gloating. Indeed, the Internet of 1996 was glitchy and unavailable to many. Ticket-purchasing involved waiting in long lines outside record stores or tying up the home phone line while waiting (impatiently) on hold.

As Oasis Knebworth 1996 vividly details, just getting to a concert like Knebworth was not easy. Even more difficult? Finding modern bands with enough popularity to headline such a location. Knebworth House was the domain of Monsters of Rock (™) like the Rolling Stones, Led Zeppelin, and Queen. Thus it’s impossible to overstate how miraculous it is that on August 10 and 11, 1996, Oasis played two concerts before a combined audience of 250,000 fans. Was the event itself not as momentous as the collective nostalgia of Oasis fans believes? (Definitely) maybe, maybe not.

It is undeniable the Gallagher brothers (and company) were never more popular than during that post-”Wonderwall”/“Don’t Look Back in Anger” /“Champagne Supernova” summer, when (What’s the Story) Morning Glory? moved bushels of CDs around the globe and every move from Liam and Noel drew the interest of MTV News and British tabloids. As a 16-year-old Anglophile, I assure you life was good—and music would never feel that world-conquering again.

That rush of old-school enthusiasm is evident in every frame of the long-awaited Knebworth. Director Jake Scott has crafted both a concert documentary and exploration of the Britpop era and what it meant. Though he’s directed several features—including the lesser 1990s pairing of Robert Carlyle and Jonny Lee Miller, Plunkett & Macleane—Scott is best-known for his music videos. Many of these—most notably R.E.M.’s “Everybody Hurts,” Radiohead’s “Fake Plastic Trees,” and, fittingly, Oasis’ “Morning Glory”—are classics of the medium. (He is also the son of Ridley Scott, but that’s another story.) Scott’s background made him a fine choice to tackle the size and scale of Knebworth, and he does a tremendous job re-enacting some sweet fan stories.

Still, the film’s greatest asset is the archival footage of the concerts, the backstage antics, and the fans pouring into the field and drunkenly shouting the lyrics to “Champagne Supernova.” Scott and editor Struan Clay were lucky to have access to oodles of incredible footage shot during both nights by Dick Carruthers, who deserves as much credit as Scott and Clay. How did this footage sit, mostly unseen, for 25 years?

The concerts themselves featured Oasis at its most confident and powerful—no one more so than Liam Gallagher. As Noel notes near film’s end, a band is only as great as its singer. And on that weekend Liam was at the height of his powers. Interestingly, the non-singles—“Columbia,” “Some Might Say,” “Hello”—hit hardest. But Oasis die-hards will be most captivated by the soundcheck footage of the then-unreleased “It’s Getting Better Man”; to a non-fan, or a moderate one, seeing this Be Here Now track performed in such a raw, punk-y state will make little impression. But I was practically sailing home with acquiesce.

The absence of new commentary from Liam Gallagher is Knebworth‘s most prominent flaw; minus a brief comment near film’s end, present-day Liam is absent. Which is a shame, since 2019’s Liam-focused As It Was and the recent documentary Rockfield: The Studio on the Farm show him an astute, genuinely hilarious figure. Noel Gallagher is, of course, always a welcome voice. But Liam is sorely missed. The film attempts to compensate for this lack of Liam with fan stories, which make a real impact. It is a rare case in which these reminiscences truly add to the meaning of the event. Such tales—including a fan who literally found out his girlfriend was pregnant before hopping in the car to head to the show, and two European teenagers who stumbled upon tickets the morning of the Sunday performance—match the sky-high optimism tinged with regret that characterizes the Gallagher brothers’ greatest songs. Watching Knebworth and seeing the chilled, lager-soaked vibe of the men and women in the audience, it’s hard to believe the toxic violence of Woodstock ’99 was just a few years away.

In the pantheon of Oasis-related cinema—Britpop documentary Live Forever; 2016 documentary Oasis: Supersonic (reviewed here); As It Was (reviewed here); the aforementioned Rockfield; and Creation Stories (reviewed here), a biopic of Creation Records founder Alan McGee that briefly features actors playing the Gallagher brothers—Knebworth ranks at the top. (I’m leaving off my well-worn VHS copies of Live by the Sea and … There and Then.) This is both the most satisfying film about the sadly departed band and the one that most adroitly captures their era. It’s also the one that best understands what made Oasis so enormously popular—the time, the sound, the lack of barrier between band and fan. Oasis Knebworth 1996 is seeped with nostalgia but aims higher than ’90s sentimentalism. When Noel bitingly told the August 11 crowd, “This is history,” it may have seemed like hubris. In 2021 we can appreciate the truth in those words.

Oasis Knebworth 1996 screened nationwide earlier this fall, is now playing in the United Kingdom, and arrives on Blu-ray and DVD on November 19.