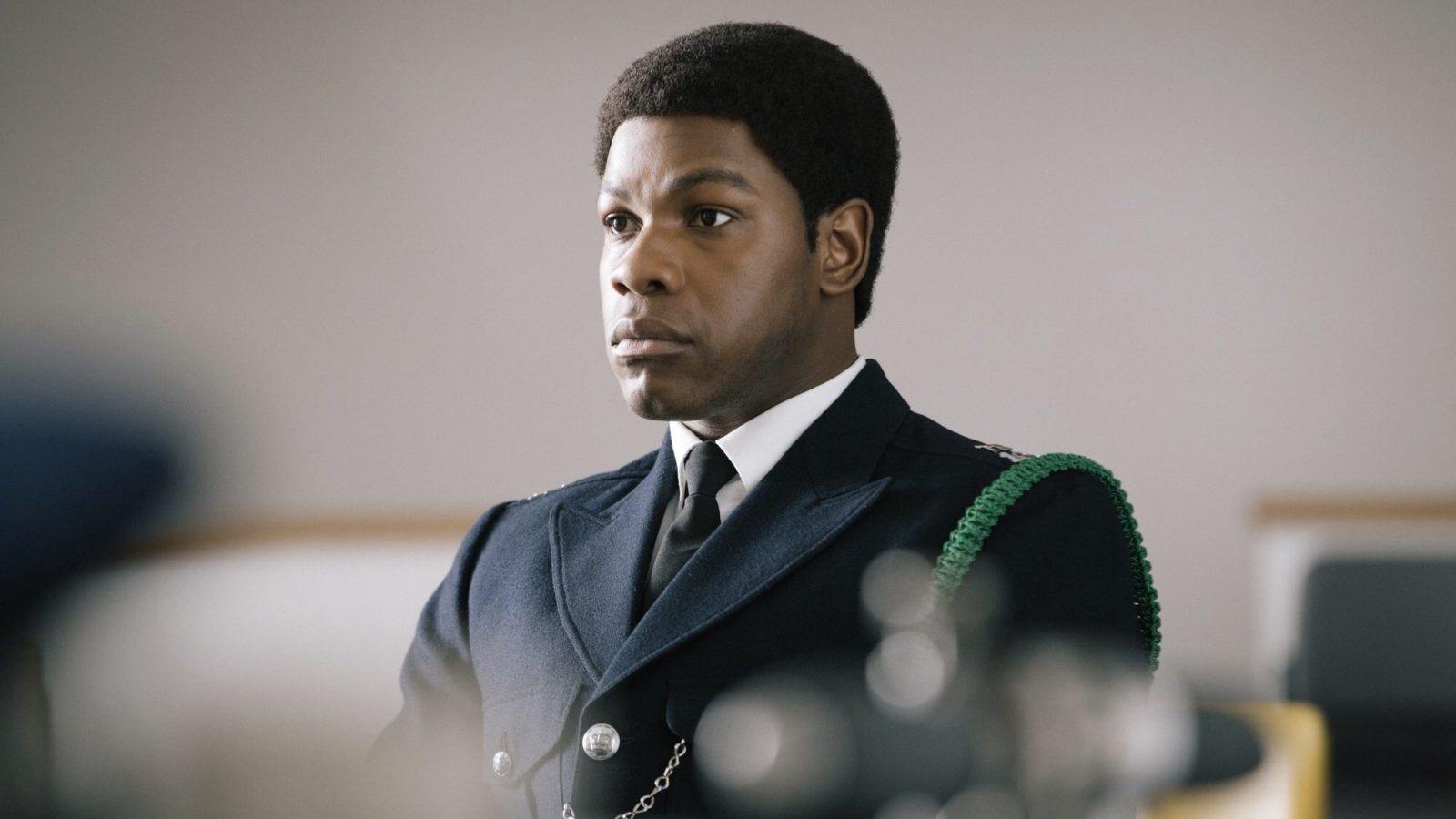 Red, White and Blue, the third and weakest film from Steve McQueen’s Small Axe anthology series to premiere at this year’s NYFF, suffers because of its programmatic narrative, in which a naïve young Black cop experiences firsthand why institutional racism might be a formidable opponent against his reformist attitude. McQueen and co-writer Courttia Newland didn’t manufacture the story out of whole cloth. Red, White and Blue is based on the true story of Leroy Logan, a former Metropolitan Police Superintendent and founding member of the Black Police Association. Before retiring from the force in 2013, Logan fought to change the Met’s internal culture, especially through high-profile cases, like Stephen Lawrence’s racially-motivated murder and the subsequent Macpherson Report, a public inquiry into the police’s handling of the investigation that concluded the MPS was institutionally racist. He was eventually awarded the MBE (Member of the Most Excellent Order) by the Queen and has become a columnist and public advocate for community policing. His autobiography about his life as a cop, Closed Ranks, will be released stateside this November.

McQueen isn’t interested in the sweep of Logan’s career, but instead its beginning in the early ’80s, around the time when Logan gave up a potential career in research science to join the force against the vocal opposition of his father, a victim of police brutality. McQueen and Newland cleave the film into two halves—the first covers Logan’s decision to join the force, and the second, his immediate experiences as a beat cop. Though the latter features a pretty stellar chase sequence across two warehouses, in which cinematographer Shabier Kirchner employs a tracking shot to amplify tension and clearly illustrate the relationship between movement and space, both are hindered by rote pacing and a muted tone. There’s a sense that McQueen wants to convey the totality of Logan’s environment—the near-constant racial strife, the pressure for the Black British community to assimilate into trad British culture, the emphasis on education as an escape from government subjugation—as a foundation for his staunch belief in reenergizing positive relations between the police and the community they’re sworn to serve and protect. But Red, White and Blue’s script compresses all of these threads into single-channel messaging. Many scenes communicate the exact same ideas, in the same direct language, all with a clear emotional and political takeaway, albeit one that is mostly morally righteous, without fully detailing the nuances and tensions implicit in them.

There’s an argument that that essentially describes the horrorshow feeling of racism, i.e. white supremacy’s mind-numbing sameness is designed to exhaust Black people of their will to fight back. Filtering that through a dramatic lens, however, requires a little more dynamism than Red, White and Blue offers. Instead, it plods through a Serpico-esque narrative where Logan’s convictions brush up against the conflicting agendas of everyone around him. His actions alienate him first from his father, then his community, and then his colleagues, all of whom seem to understand what he doesn’t: trying to reform such a corrupt institution from the inside makes you a fool at best and a collaborator at worst. McQueen blunts this theme with a handful of obvious visual metaphors, from a shot of birds flying in the sky to capture the relative freedom of Black kids outside the purview of the police, to Boyega’s profile pushed to the edge of the frame when he finally realizes how alone he is on the force.

John Boyega, finally free from the clutches of Disney and Lucasfilm, imbues Leroy with a believable idealism, and his performance goes a long way to ensuring that his awakening to the full, intractable extent of the MPS’ internal racism has the appropriate emotional punch. Same goes for Steve Toussaint, who plays Kenneth, Leroy’s strict, embittered father. McQueen and Newland characterize him as a morally righteous, yet frequently bullying man, whose bulldozing personality has rippling effects across his immediate family, not limited to his son. Toussaint’s performance embodies this internal tension without rendering it too neatly, which allows him to play tender when he quasi-reconciles with Leroy right before he leaves for police training. McQueen soundtracks the scene to Al Green’s “How Can You Mend a Broken Heart?” a great song that’s too on the nose for the moment, especially in an anthology that has (so far) excelled at deploying off-the-beaten-path period music. Still, Boyega and Toussaint provide the scene with appropriate weight. Their relationship, while not dominating the film, works as its emotional fulcrum.

Red, White and Blue also shines in McQueen’s commitment to details, from the staging and design of a traditional West Indian meal to the various mid-20th century pop and soul songs that filter through the environment. Generally speaking, Red, White and Blue succeeds whenever the film deviates from the message and showcases spontaneous and unfettered life, like a friendly Scrabble game that turns needlessly tense because of sexual repression or silly dance sequences featuring Leroy and his childhood friend Leee John (Tyrone Huntley), the lead singer of the ’80s soul group Imagination, a detail too specific to be invented. Small Axe benefits tremendously from McQueen adopting a looser filmmaking style, one that allows for realist levity, while still maintaining a severe bent. His depiction of mundane joy ultimately bolsters the numerous tragedies that structure his films.

It will be interesting to see how Red, White and Blue will play to viewers like myself who were unaware of Leroy Logan’s story when it lands on Amazon Prime in December. McQueen and Newland’s complete disinterest in lending Logan’s story any sense of conventional closure or providing much intimation of his future successes on the force is admirable considering the man’s actual biography. The film’s downbeat ending, without giving the details away, wouldn’t necessarily lead anyone to believe that Logan, or at least the character based on him, would continue his career on the force. This ultimately falls in line with Small Axe’s broad thematic drive to convey Black British life through stories both small and large, from multiple angles, that are indebted to lived experience but not necessarily beholden to strict facts. McQueen isn’t interested in Logan’s whole career, but rather the moment when he realizes that it isn’t going to be what he expected. That choice alone slightly elevates Red, White and Blue above its biopic trappings, but it’s a shame that it isn’t enough to save the whole film.

Red, White and Blue premiered at the 58th New York Film Festival and arrives on Amazon Prime on December 18.