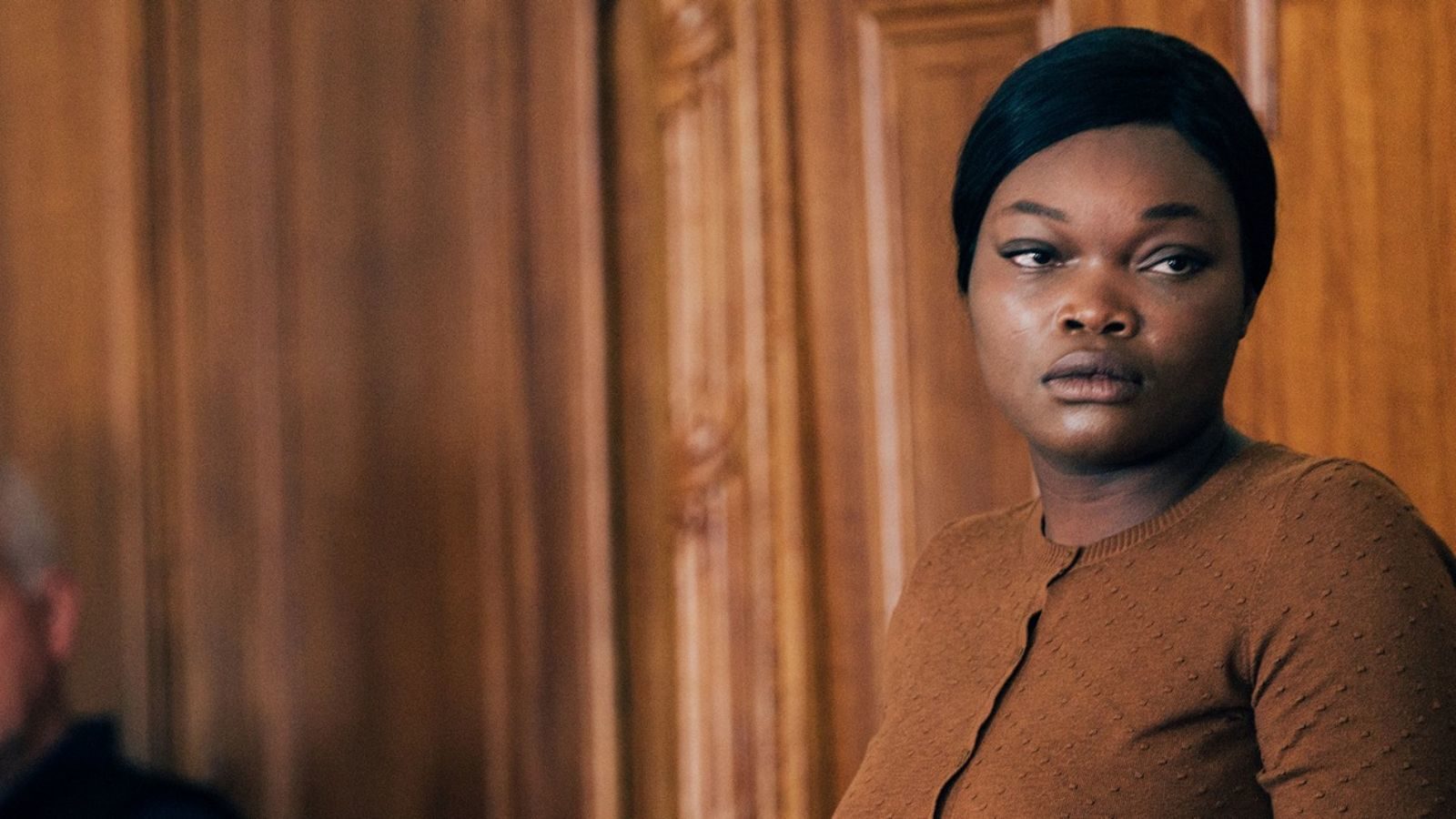 In 2016, documentary filmmaker Alice Diop (We) felt compelled to attend the trial of Fabienne Kabou, a Senegalese mother accused of infanticide. Pregnant at the time, Diop followed and read about the details of the three-year-old case wherein Kabou had taken her 15-month-old child to the beach in Berck-Sur-Mer and left her to be claimed by rising tides. As Diop watched testimony of Kabou’s unthinkable crime, she began wrestling with her own feelings—about immigrants, about prejudice, about her mother, about her own impending motherhood, and about the chemical bonds of that deeply rooted relationship. Soon a movie was born.

In Saint Omer, Diop has created a fictionalized version of that trial, centering her debut narrative feature through the eyes of her alter-ego Rama (Kayije Kagame), a journalist, professor and expectant mother living in Paris. Authoring a book inspired by the Medea myth, Rama decides to visit the eponymous town and witness a young woman named Laurence Coly (Guslagie Malanga) take the stand and defend her decision to kill her only child. The trial will offer insight and research for her writing, but quickly triggers visceral dreams, stirs up the complicated feelings she has about her pregnancy, and rekindles the fractured relationship she has with her immigrant mother.

After a few opening sequences documenting Rama’s daily life before the trial (she turns cold and distant with her husband and family), Diop spends the majority of the time inside the oak-colored courtroom. If this marks Diop’s first pivot outside documentary filmmaking, she treats the majority of these scenes with an instinctual cinéma vérité style, filming chronologically with static and slow-moving cameras that stay focused mostly on Coly’s face as she begins answering questions from the judge and barristers. Though Coly admits to killing her baby, she pleads not guilty, unwilling to provide motivation beyond claiming her murderous act came from sorcery. It begins a quiet, psychologically profound series of revelations and reconciliations.

Of course Diop—co-writing with Amrita David and Marie N’Diaye—doesn’t need to enhance the drama with anything artificial. Using transcripts from the actual trial, she keeps tension centered on the interrogation itself by leaning into Coly’s decision to hide her baby from the public and her older, white partner. Taking the stand briefly, he paints a slanted picture of their relationship and his involvement as a parent. Like Rama watching from the audience, you’re forced to consider the subtly oppressive words and details he uses that sway a jury and reflect the country’s racial attitudes towards an immigrant woman in a situation like this.

Still, this is a tragedy—Diop neither lets Coly off the hook nor shies away from a solemn testimony that sparks gut-wrenching moments as she discusses Elise’s early life and details of that fateful day. Malanga, dressed monochromatically with the wood paneling, doesn’t operate outside the witness stand—at times the box feels like a pulpit to rationalize her madness, at other times it feels like an impending jail cell subjecting her to the vitriol from the lead prosecutor and pointed clarifications by the judge. If Coly’s long monologues can occasionally drain the movie’s momentum, Diop’s courtroom compositions and unflinching portraits reignite its power at a moment’s notice.

Interspersed between the trial, Rama isolates in her hotel room and meets with Coly’s mother for lunch. She’s trying to process the testimony and whether there could be someone or something else to blame for this. Could Coly be inflicted by actual sorcery or madness? Could her foreign status make her an easy target to be ostracized by a community, or by a lover? In flashbacks accented by haunting pants and moans, Rama recalls specific childhood scenes of her own mother displaying immaturity and neglecting her, haunting moments that force her to consider the reality of the baby growing inside her. Could Rama be capable of this kind of act herself? What type of mother will she become?

Saint Omer isn’t a movie concerned specifically with a verdict. It asks you to listen, to observe and consider a tragedy and its ripples within a community. Near the end of the trial Coly’s barrister makes an impassioned closing statement appealing to the undying biological connection a mother shares with her child, through life and death. It’s not meant to reframe the crime that’s been committed; instead it asks everyone to examine and face down the monsters and madness that lurk within themselves. For Rama it’s a chance to forgive, reconnect, and find the courage to accept all of motherhood’s uncertainties.

Saint Omer screened at the New York Film Festival and will be released by Super.