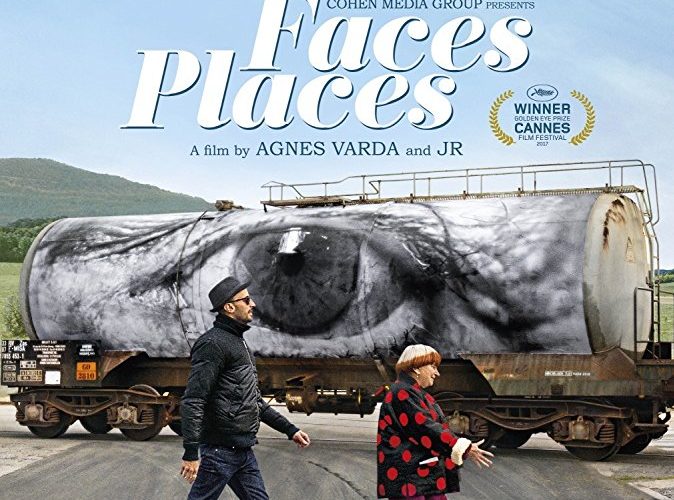 NYFF Review: ‘Faces Places’ is a Playful Stroll Through the French Countryside

The festival circuit is overwhelmed with miserabilist arthouse cinema, and Agnès Varda and JR are the unlikely agitators. She, the venerable jokester of the French New Wave shares directorial credit for the first time, finding a kindred spirit in the first-time director and longtime mural artist. Though an age gap of over fifty years separates them, both exude a complementary youth, bouncing off of each other with witty retorts and, in remarkable chemistry, imbuing their film, Faces Places,  with such a playful spirit.

The pair travel along rural France in a photobooth van dressed to resemble a camera. Stopping in small villages, they are met with a working class whose pictures are taken, inflated to larger-than-life sizes, then plastered onto local buildings. It is a fairly simple premise for an art project — succinctly able to be summed up in a title such as Faces Places — that goes a long way: subjects, both long-gone and still-living, and their lifestyles are romantically immortalized on a similarly disappearing landscape. As can be expected from Varda, this sincere interest in the lives of others is balanced with a more personal component, as she becomes the undeniable star of her own film. As the past is brought up again and again, it becomes impossible to ignore own Varda’s illustrious history. In the face of boundless optimism, a soft melancholy is brought about by the octogenarian’s mortality, which always lingers in the background of each scene as she reminisces about all that she has been through while grappling with the increasing physical limitations of her own body.

With urbanity becoming so prominent in the last few decades, would it be safe to call Agnes Varda’s explorations of the French countryside — woefully forgotten — a sort of modern-day flanerie? With a prolific filmography consisting of female characters exploring themselves through the surrounding world, Varda seems to have perfected her style — personal filmmaking imbued with an aloof, hard-to-pinpoint road trip structure, with an inclination towards the sentimental that greatly contrasted most of her New Wave contemporaries’ cynicism or intellectualism. She champions the heart, and her films feel more informed by gut emotions and intuition rather than extrinsic motives, playful and light rather than challenging. Perhaps this is why the film, even with its unique style and creative flairs, feels altogether a bit conventional. The easy digestibility — a product of its lightness — makes Faces Places very enjoyable in the moment, but also verges on saccharine. Her usual blend of documentary and fiction is most compromising in the scripted scenes between the two, which can be too cutesy and indulgent to prove genuinely insightful.

This has been a very Varda-centric review so far, so allow me to contribute a few words about JR, who donates his artistic identity to the project in allowing Varda to tag along and collaborate. In generously taking a step back on Varda’s last project and focusing mostly on her life, he becomes a pupil-of-sorts in this torch-passing of a film. It is easy to be skeptical about his artform, as pasting large photographs on walls seems minimally artistic on paper, to say nothing of being widely reliant on money and resources. But his approach is a perfect supplement to Varda’s humanist interests, and paves the way for the two to interact with as many different people — to hear their unpredictable life stories and experience their infectious personalities. It is more than just art when real connections are formed between them, and between them and their subjects. And more than explore the ability for art to act as both activism (they champion the rights of hornless goats) and empowerment (they give voices to the wives of Le Havre’s dockworkers), it also, amusingly, gives insight into the creative process of very creative people.

Faces Places‘ fairytale disposition is almost broken by cynicism and a particularly devastating scene stemming from the spectre of Jean-Luc Godard. The anticipation of a visit to his home is frightening enough: they are old friends whose styles have evolved in opposite directions, a tug of war between cynicism and whimsy. Constant references to the legendary filmmaker’s younger self exist throughout: in one sequence, the pair recreate Band of Outsiders by sprinting through the empty Louvre; and constant cuts between JR and Godard draw visual comparisons, most prominently in JR’s refusal to remove his sunglasses. This conflation of the past and present recalls the very goal of the project, keeping memories and spirits alive while barreling towards the future à la the trains that carry close-up shots of Varda’s body parts — her feet, her eyes — all across Europe to places she has never been, as JR poignantly puts it.