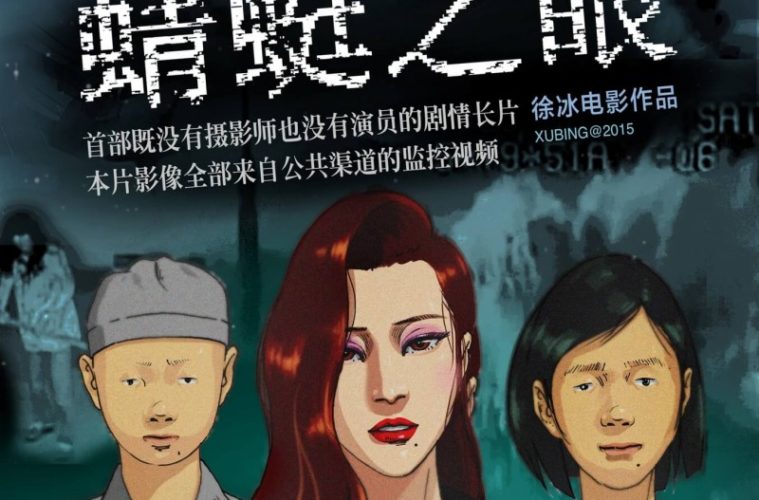 The modern pervasiveness of surveillance technology causes an unfamiliar type of cognitive dissonance where their use is collectively recognized but an innate fear of privacy lost has been pushed into the subconscious. Whether it’s security cameras posted in neighborhood bodegas, webcams affixed to almost every laptop made after 2010, or the increasing appearance of dash cams, nestled inside vehicles that can capture either the pure mundanity of the metropolitan commute or the underlying tension of it mortally barreling out of control: they’re watching, and the rapid proliferation of public-monitoring equipment makes it hard to tell who “they” are — if anybody — or why they bother to watch in the first place. Chinese visual artist Xu Bing, whose previous work includes a calligraphic book and installation piece, Tianshu, that deconstructs the logical patterns we associate with language — in this case, interpreting 4,000 nonsense characters designed to look like Mandarin — boldly approaches the concept of ubiquitous surveillance in the contemporary world, particularly in China, with the same tabulating candor.

Dragonfly Eyes is the result of 18 months’ worth of retrieving, compiling, and culling from 11,000 hours of surveillance-camera footage, now publicly available due to the Chinese government’s loosening of ownership over online content in 2013, allowing for unprecedented access to streaming platforms, including IP-based security feeds using cloud storage. Out of these hours and hours of raw “living data,” as Xu calls it, he and his team of editors assembled a collage of footage structured around a screenplay developed by poet Zhai Yongming and writer Zhang Hanyi, broadly tracing two star-crossed lovers disaffected by the pressures of the digital age. 17-year-old Qing Ting, or “Dragonfly” in Mandarin (voiced by Liu Yong Fang), and her loyal friend, Ke Fan (voiced by Su Shang Qing), at first seem destined to be there for each other until tragedy and Ke Fan’s obsession with Qing Ting strain their relationship. It’s difficult to winnow either of their personalities down to a definite form, both relayed primarily by voiceover dialogue cleverly intersecting with pieces of curated footage, for the viewer can only project their voices and thinly sketched gender profiles onto the countless humanoid blobs captured on camera. These pixelated silhouettes are anonymous to our eyes, but not to those of Dragonfly, an apparently sentient AI program that is effectively the filmmaking apparatus of the film, conceptualized as a thinking system fixated on accumulating data to construct human narratives out of crude, often silent camera feeds.

Dragonfly is unrefined as a fully functional system, but a creative prototype for interception and analysis (like the redoubtable AT&T Room 641A of internet folklore) made into a rogue, semi-mystical abstract, born in the sea of information, striving toward what it believes to be perfection: total comprehension of the spontaneous, inexplicable poetry of everyday life. This mirrors the journey of Qing Ting herself, pitted against a rebirth of sorts as she enters the chaotic modern world for the first time, testing her faith as a Buddhist as well as her sense of self affected by the undermining properties of assimilating into largely anonymous urban life.

Qing Ting leaves the safety of her temple to mould her own identity in the alluring, consumer-driven flux of the big city. In-between this farewell to her birthplace and her starting to work at a milking factory in the city, graphic footage depicting a fiery plane crash onto a highway is cut in. This is not the first instance of explicit footage to be found therein, as a police department’s investigation into a series of seemingly connected suicides of young women underscores the main plot before it even begins, although there is ultimately no resolution to this thread. These moments are obviously difficult to watch, with the creeping realization that you are observing recordings of real death queasily lingering, and Xu shies away from committing to ethical responsibility, maintaining that these are reflections of the “chaotic world around us” — appropriate based on his assertions towards the malleability of the postmodern identity, but paradoxical to his use of the explicit footage as more artificial punctuation than anything.

Certain observations on modern living — such as the virtual mediation of identity through online streaming platforms and its reverberating, possibly fatal influence on the users and surrounding culture at-large –are fascinating, but also symptomatic of a fundamental disconnect from the material. Xu and his screenwriters devise a slim, opaque-enough storyline that allow Xu’s evident talents as a montage storyteller and sociologically minded individual to rise to the surface, yet, upon closer inspection, it’s apparent his ideas constitute an ocean that is wide but not particularly deep.

There’s enough here to make Dragonfly Eyes a riveting 80-minute prototype for what’s possible with this distinct filmmaking model. Xu has an unconventionally impressionistic eye for montage and constructing a believable space via atmospheric sound design, helping position its mildly profound pontificating on postmodern identity (e.g. an especially memorable plot thread involving replicative plastic surgery) with immediacy and expressive portent. Taken as a whole, though, the experience can be likened to an easily misplaced pocketbook of ostentatious poetry that’s been compressed to the size of an SD card.