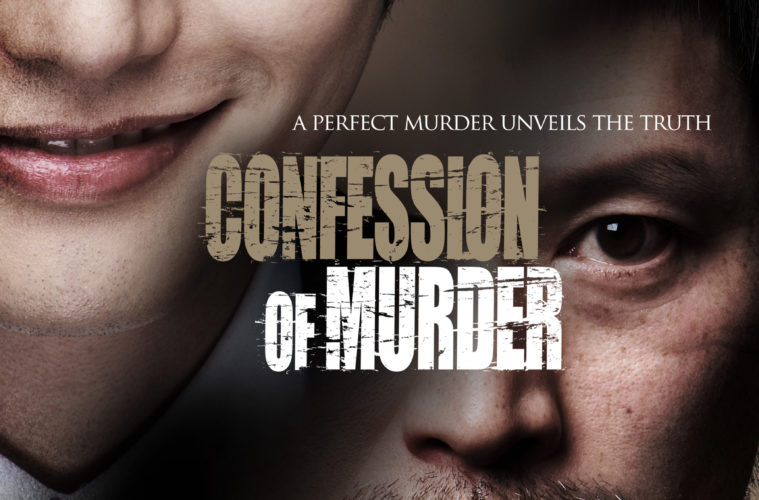 The present state of South Korea’s national cinema indicates a country under the constant threat of warfare and destruction. Widely recognized films like Park Chan-wook’s Oldboy and Kim Ki-duk’s Golden Lion award-winning drama Pieta are fraught with tense uncertainty and unflinching brutality – there’s sense of not knowing what or whom you should fear, but that you should be prepared for it (think of Old Boy’s anti-hero practice fighting for the day he meets his unknown, unseen captor). In the case of director Jeong Byeong-gil’s film Confession of Murder, these telling themes add both grit and meaning to an otherwise accessible crime thriller.

Within the first few minutes, the cat-and-mouse story jumps into action when the protagonist Lt. Choi (Jung Jae-young) is attacked by a knife-wielding masked man in a restaurant. When the assailant runs – but not before cutting the throat of an innocent bystander – Choi gives chase through the rain drenched streets, only to end up bested and with his cheek slashed. Not long afterwards, Choi watches helplessly as a young man jumps to his death. Cut to two years later, and it’s revealed that the mysterious character who eluded Choi is a serial killer responsible for the deaths of multiple women, including the mother of the man who committed suicide. Haunted by the victims he failed to protect, the battered detective ends his years-long pursuit of the murderer and seeks solace in a bottle of booze. His life becomes more complicated, however, when the 15-year statute of limitations expires on the case, allowing a charming pretty boy named Lee Doo-seok (played by the flawless Park Si-hoo) to publish a book claiming he’s the killer. His appearance causes a media firestorm that hooks Choi, who’s unconvinced that the handsome stranger is responsible for the crimes. What transpires is a taut, twisty mystery that involves a celebrity-obsessed public, a group of individuals out to avenge their dead loved ones, and an anonymous sociopath who comes forward to dispute Lee’s story. As the plot thickens and the real monster closes in, Choi returns to his investigation, a process that dredges up painful memories along with new evidence.

It’s apparent from the beginning that Choi and the murderer are strangely and violently intertwined, but their personal connection unfolds only when it’s guaranteed to pack the biggest punch. The same goes for the group of vengeful family members, many of whom are introduced as one-dimensional beings with a single defining trait: Girl With Crossbow, Old Man With Snakes, Grieving Old Woman. Over time, their tragic backgrounds are revealed in fleeting, humanizing moments. By holding their histories back, Byeong-gil also manages to produce a poignant criticism on how sensationalist media focuses on the killer instead of the victims. The point is further driven home later when, during an exploitative talk show, one father’s speech about his murdered daughter is interrupted when the Lee’s faceless detractor arrives on set.

Like Chan-wook’s tale of captivity and revenge, Confession of Murder also delivers plenty of action, but without the style or the significance. The initial confrontation unfurls in a flurry of weird POV shots and messy Steadicam footage, resulting in a confusing, poorly choreographed fight sequence. The film is further bogged down by two goofy, hyper-edited car chases that are as unnecessary as they are unentertaining. These moments clash with the rest of the film, and add nothing to a story that excites without the help of cheap visuals.

Despite its inner conflict, Confession of Murder weaves a suspenseful, compelling tale that saves its surprises until the very end. As a representative of South Korean cinema, it also continues to illustrate the country’s own struggle with a looming enemy that, like the film’s sociopathic killer, destroys others purely for the purpose of demonstrating its own power.