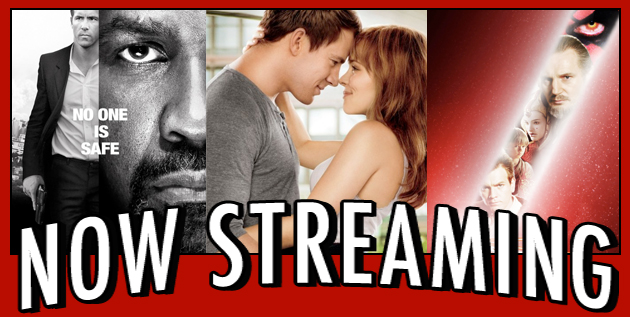 Each week within this column we strive to pair the latest in theatrical releases to worthwhile titles currently streaming on Netflix Instant Watch. This week we offer alternatives to Safe House, The Vow, & Star Wars: Episode I – The Phantom Menace 3D.

Facing off against the Galactic Empire in theaters this weekend are two ill-matched secret agents and a pair of lovers more beautiful than lucky. But if this isn’t enough to satisfying your thirst for action, adventure and romance, you’re in luck as we’ve got some choice titles that are Now Streaming.

Ryan Reynolds is a desk-bound secret agent thrown into the fray when a disgraced ex-operative (Denzel Washington) barges into his safe house, throwing his whole world into free-for-all. Vera Farmiga co-stars. Blitz (2011) Jason Stratham stars as a furious cop who channels his overdrive aggression into tracking down a grisly serial killer. Paddy Considine co-stars.

Kill the Irishman (2011) Ray Stevenson gets his glower on as Danny Greene, the Irish mob boss who ruled 1970s Cleveland. Christopher Walken and Val Kilmer co-star in this true-crime tale.

Rachel McAdams retreads some Notebook territory in her latest tragedy-touched romance. This time around she plays a young wife who loses her memory after being the victim of a car accident. Channing Tatum co-stars as her devoted husband who must re-win her heart. Looking for love laced with drama?

The Last Mistress  (2007) This luscious tale of love comes from internationally acclaimed French director Catherine Breillat. Set amidst the lavish world of French aristocracy, a dashing but penniless young man (Fu’ad Ait Aattou) falls for a fiery woman (Asia Argento). To maintain his social standing and his family’s pride, he must marry a woman of wealth and stature, but that doesn’t means he’ll leave his mistress behind. Forbidden love has never been so torrid!

Weekend (2011) For a more contemporary love story, check out this lauded drama out of England. Two men meet on a drunken night out at a club, but a one-night stand soon develops into something more complicated, frightening and potentially rewarding. Newcomers Tom Cullen and Chris New co-star in this poignant and understated romance. Seeking more out of this world epics?

Titan A.E. (2000) For something more family-friendly check out this Don Bluth offering. Matt Damon lends his voice to Cale, an orphan from the destroyed planet Earth whose looking for his place in the vast expanse of space. But he finds his destiny—along with a captivating love interest (Drew Barrymore)—when he crosses paths with a long-forgotten friend (Bill Pullman). Tiny Furniture (2010) Lena Dunham made waves last winter with her sophomore effort as a writer/director/star. Tiny Furniture is a Manhattan-set comedy inspired by Dunham’s own first world problems and peopled with her real-life family and friends. While this may seem potentially narcissistic and overly twee, Dunham’s utter lack of vanity (or shame) makes for a comedy that is deeply revealing and thoroughly funny. At the center of this comedy is Aura, an aspiring videomaker lost in a post-graduate delirium. After moving back home with her mother and wunderkind kid sister, Aura tries to figure out her next move with the help of her partygirl gal pal. Whether she’s going pantsless to embarrass her sister or having public sex in a cringe-inducing locale, Dunham’s meandering heroine is always hysterical yet strikingly relateable. It’s like Woody Allen for a new generation.
[My Full Review]