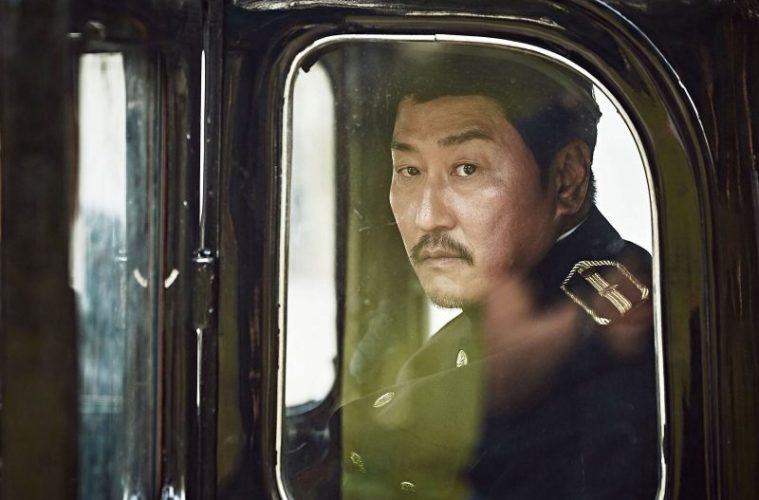 New to Streaming: ‘The Age of Shadows,’ ‘Tampopo,’ ‘Small Crimes,’ and More

The Age of Shadows (Kim Jee-woon)

Eyebrows were raised when it was announced that South Korea will submit the as-yet-unreleased espionage thriller The Age of Shadows for Oscar consideration instead of Cannes hits The Handmaiden and The Wailing. Premiering out of competition at the 73rd Venice Film Festival, writer/director Jee-woon Kim’s return to Korean-language cinema after a brief stint in Hollywood with the Schwarzenegger-starrer The Last Stand turns out to be a worthy choice that makes particular sense representing the country given how it speaks directly to the national memory/identity. – Zhuo-Ning Su (full review)

European directors have often faltered when crossing the Atlantic. Billy Wilder and Wim Wenders found things to say where Paolo Sorrentino could not. American Honey is certainly the former. Based on a 2007 article from the New York Times, it’s a backwater American road movie directed by an Englishwoman, Andrea Arnold, and shot by Irishman Robbie Ryan. We spot a few cowboys and gas stations and even the Grand Canyon, but it’s nothing to do with any of that. It’s about America (duh) but it’s also about friendship and money and learning to look out for yourself, and that primal connection young people make between music and identity. It’s visually astonishing and often devastating, too. This might be the freshest film about young people in America since Larry Clark’s Kids from 1995. – Rory O. (full review)

Josef von Sternberg called Anatahan his best film. Borne from more than a decade’s worth of frustration with the studio system, it was, as the last picture he completed, his stamp on his time as a director. Even then, when released in 1953, it was only released in a butchered format, and, as it often goes in such cases, was subsequently abandoned by popular consciousness. But a few times each year, cinephiles (at least ones in major cities) are treated to big-screen resuscitations of long-neglected works. Now, Anatahan has been restored by Kino Lorber to Sternberg’s uncensored version, and it hits Blu-ray and streaming this week. – Dan S. (full review)

When it comes to documentary filmmaking, the issue of perspective is often of paramount importance. A great deal of sensitivity and tact is required in telling any true story, especially one as fraught and horrifying as the unsolved murder of JonBenét Ramsey, the six-year-old pageant queen who was murdered in 1996 in Boulder, Colorado. Kitty Green opts for a peculiar and altogether unsettling approach in her new documentary Casting JonBenet, one that utilizes a wide canvas of perspectives to approach some measure of understanding. Like a great deal of worthwhile documentaries, it offers numerous suggestions without ever providing any concrete answers, and leaves the viewer to sift through the evidence, so to speak. – Ryan S. (full review)

For its combination of rocking performances from famous musicians (the line-up included St. Vincent, tUnE-yArDs, Nelly Furtado, and Byrne himself), the dazzling work of athletic, often high school-aged color guard teams (those flag- and baton- and rifle-waving types who perform synchronized dance routines), and the compelling success story that comes with their meeting in an arena — to say nothing of the presence / brand carried by the show’s mastermind, David Byrne — last year’s Contemporary Color tour is an exceedingly film-friendly show: a visual-aural presentation the likes of which most directors would be thrilled to have placed before them. That also makes it potentially dangerous territory: if the glut of bland concert movies are any indication, many of those same directors might be tempted to do little except observe, essentially having their subjects meet them 70% of the way. – Nick N. (full review)

We said in our review, “Mifune: The Last Samurai, the well-assembled documentary on the life of actor Toshirô Mifune, the long-time Akira Kurosawa collaborator, should be a worthy introduction to one of Japanese cinema’s greatest icons, if a little light on more revelatory findings. With a softly-spoken narration by Keanu Reeves and talking heads from the likes of Martin Scorsese and Steven Spielberg, as well as the sons of both Mifune and Kurosawa, Mifune offers a personal and professional tribute to an actor who reinvented the hero for a post-World War II age.

Why You Should See It: After producing and distributing his Sundance-winning drama I Don’t Feel at Home in This World Anymore, Netflix is staying in the Macon Blair business. Their next collaboration isn’t one he directed, but rather wrote with E.L. Katz, who is making his directorial follow-up from the humorously brutal Cheap Thrills. Starring Nikolaj Coster-Waldau, Robert Forster, Gary Cole, Jacki Weaver, Larry Fessenden, Pat Healy, and Blair himself, the SXSW premiere is now on Netflix.

Southside with You (Richard Tanne)

Arriving just in time for the end of the Obama era, Southside With You depicts a history-changing summer afternoon in 1989 in which our future national leader took Michelle Robinson out on what would become their first date. Barack Obama (a convincing Parker Sawyers), working at a corporate law farm as an associate from Harvard Law, persuades his co-worker Michelle (Tika Sumpter, also a producer here) to attend a community meeting, which is not a date, according to her. – Jordan R. (full review)

As the most basic level, Tampopo can be sold as Rocky with ramen, but the eccentric contours of Jûzô Itami‘s 1985 hit make this more than a simple underdog story. Following a pair of truck drivers (including a young Ken Watanabe) who assist a widow in revitalizing her business and creating the perfect bowl of ramen, there’s also cuisine-centered erotism, gangster drama, spaghetti-eating lessons, a death-inducing final meal, and much more. Excelling both as a film about process and a swirling fantasy about culinary ecstasy, Tampopo is one of the best films about food ever made, perhaps even besting another Criterion release, Babette’s Feast. – Jordan R.

Ermanno Olmi‘s three-hour-plus Palme d’Or winner is a naturalistic masterpiece and an early contender for one of The Criterion Collection’s finest restorations and re-introductions of the year. Exploring peasant life in the northern Italy area of Bergamo, Olmi captures a group of families’ struggles and minor triumphs without a shred of artificiality throughout the entire runtime. If cinema’s greatest accomplishment is opening a window to the other side of the world, The Tree of Wooden Clogs is one of the prime examples of genuine humanity. – Jordan R.

J. M. Mondésir + Rashomon
The Trip + The Trip to Italy
Wedding Rehearsal
The Private Life of Don Juan
An Ideal Husband
The Rise of Catherine the Great