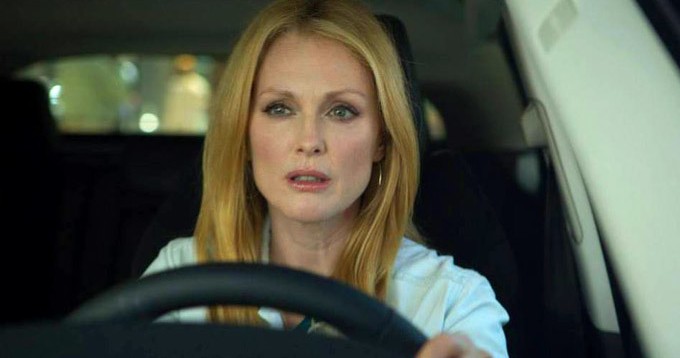 New to Streaming: ‘Maps to the Stars,’ ‘House of Cards,’ ‘Serena,’ ‘My Life Directed,’ and More Being an embedded photojournalist is a concept I cannot quite wrap my head around. To willingly go into a war zone and risk your life to get a shot, not for plaudits, but to educate the world about atrocities we’d rather turn a blind eye towards? It’s one thing to do it in a place where an errant bullet aimed at a rebel or infidel could miss its target and hit you instead and a whole other at present when terrorist organizations like ISIS seek any western face they can to behead on TV and reinforce their extremist rhetoric. To do so with a spouse, children, and people who love you back home takes a level of courage impossible for me to measure. And despite its selfless quest to eradicate ignorance, one needs plenty of ego too. This is exactly the person screenwriter Harald Rosenløw-Eeg and director Erik Poppe have crafted via Juliette Binoche‘s Rebecca in 1,000 Times Goodnight. – Jared M. (full review) Gaspard (Melvil Poupaud) arrives off a ferry and bustles up the road to the vacation house he will reside in for the next few weeks. He goes out for a quiet drink, avoids the bustling clubs, and returns to his apartment to tune a few notes on his guitar. It appears, for a while, that he won’t speak. What will bring this poor boy out of what seems like his purgatory? Luckily, Margot (Amanda Langlet), a pretty girl sporting a bright, red two-piece on the beach, invites him to chat. Once they start chatting, they will not stop. A Summer’s Tale might be the sex comedy Eric Rohmer never intended to have branded as such, but his 1996 film – finally getting a US theatrical release in a rather fine digital restoration (more on that later) – is a piercingly funny work of indecision. – Peter L. (full review)

This is not necessarily Wes Anderson’s “worst” film — it’s one of the sturdier debuts of the ‘90s, plays loose without seeming inchoate, and functions well as an object that foretells what would come. A fine thing, yes, but it’s also the selection that feels the least anything about, however well this might speak to the film’s relatively even-keeled attitude. I looked at the rest here. – Nick N.

Yes, we don’t normally cover television, but this release may be the most notable new-to-Netflix selection of the batch. Featuring Frank Underwood bringing his evil ways to the Oval Office, all of season 3 of House of Cards can now be streamed.  – Jordan R.

Honesty is hard to come by in the movie industry. With millions of dollars at stake, safe repetition is often the easiest, well-treaded path. My Life Directed By Nicolas Winding Refn, a 58-minute documentary about the making of Only God Forgives, challenges the norm and reveals a working director’s latest film and his struggle to figure out how to bring it to life. The film was shot by director Nicolas Winding Refn’s wife, Liv Corfixen, and it gives us intimate, day-by-day access to their life together during the six-month trip to Thailand with their two children and the way Refn tries to blend being an artist and having a family. Challenging and engaging, it’s a documentary that is perhaps more interesting and deep than the film it is about. – Bill G. (full review) One of the many films to open with the misdirection of a movie within a movie, Open Windows actually earns it, even if the effort it expends in doing so makes no effort in really separating the layers of cinema fantasy. Because while festival programming guides will like to label it as an update of the Hitchcock–De Palma voyeuristic thriller, Open Windows is, if anything, far more like a Feuillade serial: one cliff-hanger after another — which is perhaps why the film runs 100 minutes, instead of the usual gimmick film’s 80 — including criminal underworlds, wild plot twists, and shifting identities. – Ethan V. (full review)

How practical, really, is a RoboCop? A rigorous machine guided by the impulses of a human brain, packed into an ass-kicking, cyborg form and loaded with weaponry and intel that make it nigh-unstoppable if it goes haywire. That’s never seemed like a sure sell, not in the original Paul Verhoeven film—where the absurdity was part of the satire—and certainly not in any of the pathetic sequels. Along comes José Padilha’s mostly irrelevant remake, offering a novel reason for its existence; it’s relentless in its effort to make us believe in a world where something like RoboCop could actually exist, and maybe even make a difference. – Nathan B. (full review) To say it has been a long road for Serena to hit screens would be an understatement. With production beginning in early 2012, the film has languished in post-production and we’ve seen stars Jennifer Lawrence and Bradley Cooper team for Silver Linings Playbook and American Hustle since then. Meanwhile, director Susanne Bier has shot and completed two films in the interim — but now, finally, the film is finally available. An adaptation of Ron Rash‘s period novel, the drama also stars Rhys Ifans and Toby Jones, and follows our leads as a couple in a Depression Era-set North Carolina that attempt to build a timber empire. – Jordan R.

A touch of Vertigo, but with a comedic twist, Wild Canaries follows amateur sleuths that have too much time on their hands and end up in over their heads. Written, directed, and starring Lawrence Michael Levine, Canaries is a screwball comedy with a murder mystery at its core. While the central mystery isn’t airtight, it manages to intrigue one along the way. There are only a core group of players involved, which limits the possibilities less they pull a Scooby Doo and reveal the murderer to be the guy we saw for just a brief moment — instead we get multiple suspects and much hilarity in the process. – Bill G. (full review)