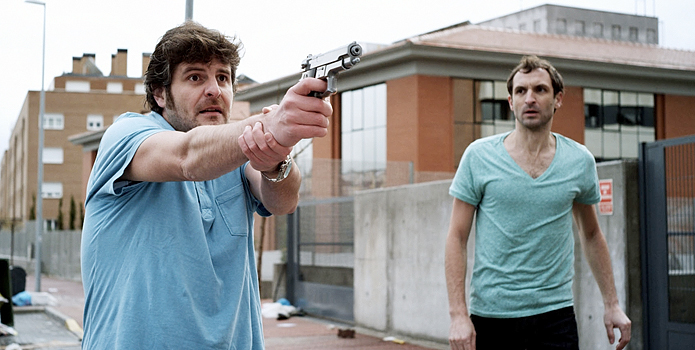 If you haven’t seen Nacho Vigalondo‘s Timecrimes, I suggest going to do so right now. We know a US remake is currently in development, courtesy of Steve Zaillian (who has Moneyball and The Girl With the Dragon Tattoo coming later this year), but the original is a gripping, fun exploration of time travel with stellar mise-en-scène.

It has just been announced the director will premiere his long-awaited sci-fi/romance/comedy Extraterrestrial and now we have a new batch of images. We already showed off the poster, but see the new images above and below for the film starring Michelle Jenner, Carlos Areces, Julián Villagrán, Raúl Cimas and Miguel Noguera. Julio and Julia don’t know each other, but they wake up in the same bed horribly hungover and with no memory of the night before. He falls in love with her almost immediately – she does not. The last thing they expect to discover is that an alien invasion has taken place. Vigalondo melds science fiction, romance and black comedy in his latest feature about the darkly fascinating aspects of the human psyche.