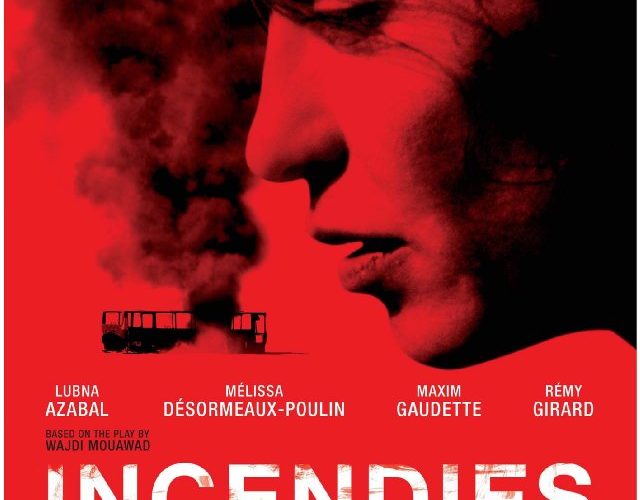 The message running throughout Incendies is clear enough. It’s so clear, in fact, that those watching are in danger of injury, due to intense bludgeoning of said subject matter. The film, directed by Denis Villeneuve, delves into the moral fiber and traumatic tree rings of war more than most films have or most likely ever will, but without one clear vantage point or emotional anchor.

Olivier Assayas‘ Carlos, which similarly tackles military revolt and the collateral damage that comes with it, is focused and dense, never diverting from its narcissistic, passionate title character. Villeneuve’s central character, Nawal (Lubna Azabal), is a cipher. A survivor who does just that and not much more. She survives. She survives the bombing of her village, a bus ride that ends riddled in bullets, a never-ending stint in prison complete with every kind of torture and so much more, including separation from her first-born child. Unfortunately, the audience knows about as much about Nawal as her second and third children, twins Jeanne (Mélissa Désormeaux-Poulin) and Simon (Maxim Gaudette), do.

The film opens with their mother’s death. In her will Nawal orders her children to find one person each: their father who they thought was dead and a brother they never knew they had. Simon scoffs at the idea, deeming his mother as loony dead as she was alive. Jeanne is more sympathetic, taking on the journey herself for the most part. She travels from France to the Middle East, to the village her mother grew up in. By the time we know enough about Nawal, the film has ended and we’re left wondering what was going through this woman’s mind the entire time. Perhaps this film plays better on a second viewing. Only time will tell.

No matter what, there’s no denying that Villeneuve is a visual artist. As Jeanne walks amongst the rubble of firefights past and back into the lives of all those who once knew her mother, Villeneuve finds life after a first act that, though intriguing, is far too bogged down in explanation. There’s more than a bit of Germany Year Zero being referenced here, and it’s much appreciated. The first act slog, however, comes primarily from Nawal’s boss, Notary Jean Lebel (Rémy Girard), who takes it upon himself, after dictating the will as per Nawal’s request, to actively help the twins find their father and brother. His screen time never feels organic or necessarily earned.

His recollections of Nawal are vague and shallow, and even while the idea of ever really knowing someone is running through this narrative’s every moment, the Lebel character is the exclamation point at the end of a sentence that is plenty loud enough.

Interesting moments, such as Jeanne’s hostile encounter with a group of resentful villagers (“she’s asking about her father but doesn’t know who her mother really is,” one woman says enigmatically) come and go too quickly, leaving the rest feeling surprisingly vacant, despite brutal violence and a brutal narrative.