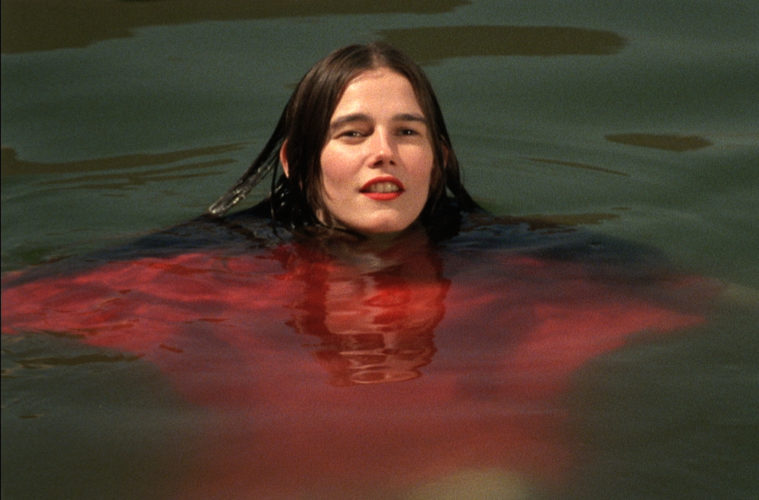 To the right crowd, there are a lot of familiar faces in Benjamin Crotty’s Fort Buchanan, a look into the life of a number of mostly-sexually frustrated army spouses—and note “spouses,” not wives; France was more than a decade ahead of the United States on allowing homosexuals to serve in the military—that expands and revises his 2012 short Fort Buchanan: Hiver. Andy Gillet played lead in Eric Rohmer’s Romance of Astree and Celadon; Mati Diop of 35 Shots of Rum and a talented director in her own right features prominently; Iliana Zabeth, Pauline Jacquard, and Judith Lou Lévy all have parts in House of Pleasures. All this (relative) star power goes a long way.

With character numbers approaching double-digits and the film barely running for more than an hour, Fort Buchanan could easily get lost amidst indistinguishable faces and undifferentiated characters, but Crotty opts to shoot primarily in close-ups, and his performers—particularly Gillet as the lead, Roger, Diop, and Jacquard—pull through. Most of the characters don’t have much time (if any) to convey their plight, so it’s up to distinct mannerisms and attitude to suggest backstory to us, which Jacquard’s brash spontaneity and Diop’s quiet confidence pull off effectively.

Fort Buchanan is in French and set in France, but Crotty is American-born, and both his predisposition toward close-ups as well as his dialogue, which tends toward an American skittishness about sex despite the characters’ openness make this film feel like a close cousin of mumblecore. This is also a result of Crotty appearing to be more of a comedian than a dramatist, but either way, there is no question that Gillet is not in a Rohmer film anymore.

When Roger is reunited with Frank, his husband, their ensuing sexual conflict derails the film from its more successful mumblecore side. Similarly, a sudden development near the end of the film that forces the characters back into society offers no dramatic stakes or purpose. All of this is to say that there are enormous storytelling issues in Fort Buchanan, but its comedy and its brevity—the film clocks in at a brisk 65 minutes with credits—also prevent these shortcomings from becoming frustrating. On the other hand, Crotty’s use of cutaways and shots of nature work both to isolate the group from society at large while also establishing a keen sense of place, a feeling that goes a long way to grounding the unfolding soap opera.

When the film rushes off to its end, it’s hard to determine exactly what it wanted to demonstrate, and distance only makes the details fade. It’s an easy, sometimes amusing watch, but also an unfulfilling one, as if Crotty needed another hour to make his characters memorable rather than relying on sheer star power.