ND/NF Review: The African Desperate is a Boisterous Portrait of Academia, Artistry, and Aimlessness 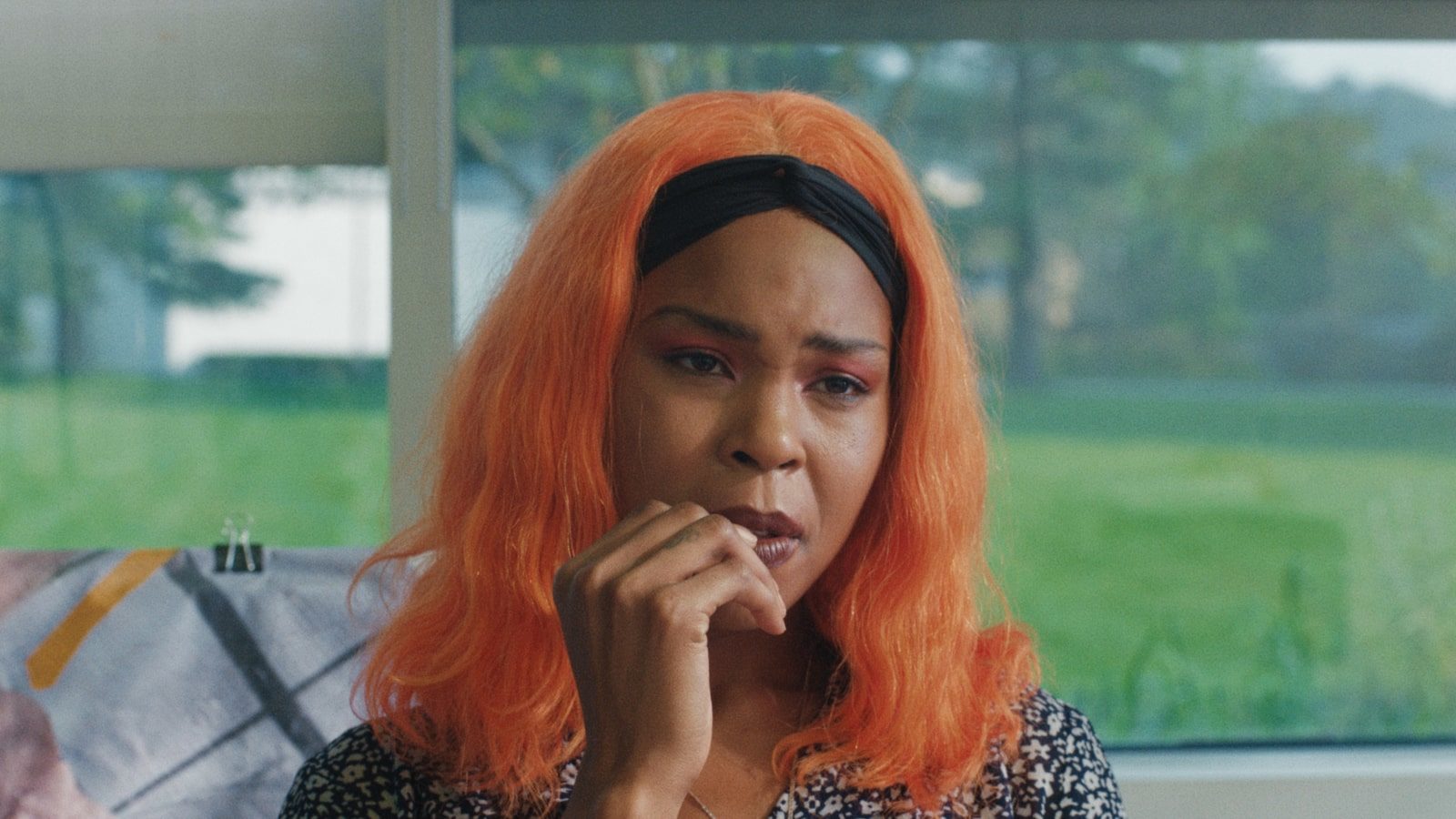 Early into Martine Syms’ The African Desperate, MFA finalist Palace (Diamond Stingily) sits for her last exam in an upstate New York art school tucked deep in the woods. It’s the end of a three-year voyage, the kind of moment that should trigger swaths of pride and relief. But Palace, a Black student in an exceedingly white college, is frustrated, tired, on the verge of a breakdown. Her art has already shown at the Venice Biennale, a feat her all-Caucasian examiners don’t really know how to respond to. (Did she earn a spot because of talent, or…?) Even after they christen her a Master of Fine Arts, the mix of animosity and envy lingers acridly in the room. “There are lots of female artists your age and race making the same stuff you’re doing,” a professor chides her over drinks, “how are you going to differentiate yourself?”

Rollicking, piercing, and wildly entertaining, The African Desperate is pitched along the border that runs between being excited for one’s future and terrified about not knowing what it’ll look like. A 24-hour chronicle of Palace’s graduation day (and night), Syms’ first feature is a close-up study of a young woman who must suddenly confront that peculiar spleen that comes from reaching the end of a tortuous journey and being a little unsure what that means for her life. If Palace’s aimlessness makes The African Desperate feel somewhat universal, the vividness with which Syms captures her bohemian milieu turns it into a boisterous Portrait of the Artist as a Young Black Woman—one struggling to build her voice over and against the academic bubble she’s finally free to leave.

Palace may have few clues about the future, but she does know she’s through with her school (a fictional, unnamed institution modeled off of Bard College’s Center for Curatorial Studies—which Syms attended, and where parts of The African Desperate were shot). She’s off to her hometown, Chicago, and “the kingdom of Illinois” the next morning; all she wants with the few hours left is to pack and sleep, never mind the graduation party she was meant to DJ (“I’m done going to events that don’t cater to my basic human needs,” she grits). It’s not much of a spoiler to say Palace will change her mind, eventually. Cajoled into attending the fiesta by some course mates very generous with their drugs—and by the prospect of some last-minute fun with an old flame—she staggers onto the faculty grounds for a night-long bacchanalia, her mane of orange hair glowing in the dark, a tall silhouette twirling in an ecstasy-, molly-, shrooms-, and weed-induced bliss.

Co-written by Syms and poet Rocket Caleshu, The African Desperate doubles as a satire of the art world and a few of its eccentric resident-hopefuls. Caleshu and Syms have a keen ear for the jargon of Palace’s bubble, an eye-rolling patois of scholarly quotes and unlikely creative manifestos (one fellow graduate talks of “disrupting the flow of capital with painting”). But their script strikes a careful balance between irony and tenderness. Even as it relishes poking the wide-eyed, privileged, royally plastered students Palace ambles past through the night, The African Desperate is all too aware of that strange and terrifying moment they’re going through; there is empathy beneath the satire. To be clear: Syms’ film is a far cry from the wistfulness of Richard Linklater’s college or high school comedies, yet the tonal whiplash of warmth and anger complicates Palace’s antagonism toward the place. I’m not doubting for a second that she “fucking hated it here,” as she confesses at the start. But there’s a childlike wonder and strange melancholia that congeal in her face at different junctures of the night, and it’s that look that lingers longer than any other. The African Desperate is a scathing, often merciless debunking of a certain strain of liberal thinking—and liberal personalities—but it’s also a homage to a life chapter that’s about to end, and to degree-long friendships that will soon be tested by time and distance.

There’s no denying the revolting passive-aggressiveness Palace is treated with by her white profs; their inability to reckon with her craft outside the hollow double prism of “diversity” and “representation;” and, more broadly, the kind of obstacles Palace is up against in a faculty that doesn’t even know how to speak to her (“Let’s start talking about the work,” she snaps at the board early on, “and y’all stop making me the work”). Yet the film is never overtly polemical, and this animosity is nowhere as palpable as it is in the preamble. Once Palace’s examiners skulk out of the frame, the same frictions find other, subtler ways to surface and combust. A case in point: late in the film Syms crafts a montage of all the haunts Palace is leaving behind, but what we hear ricocheting off those bucolic glimpses of Tivoli, NY, is the audio of a since-deleted viral vlog where a Black man documents his last day at work and grills his racist colleagues. It’s an intrusion that complicates Palace’s departure—will she quit too? Can she afford to? And it’s a bubble-bursting moment that connects Palace’s emancipation struggle with wider and timeless battles raging outside the faculty’s ivory tower.

The montage is not the first time social media percolate through the film’s fabric. Shot by Daisy Zhou—a palette in turns lush and lurid, where the woods’ greens vie with the party’s neons—The African Desperate is peppered with all kinds of GIFs, memes, bold fonts, and reaction videos. In that it feels like a continuation of Syms’ previous films (most notably perhaps her 2017 experimental surveillance drama Incense Sweaters & Ice), which also superimposed social media to simulate what the director has called “the private-public unconscious” of visual culture. Syms is one of several filmmakers toying with social media in their projects, but The African Desperate marks a refreshing rupture from the more alarmist tones with which screen-heavy lives are usually told. Here the collage of superimposed images and clips carries a rebellious zing. Much as a simulation of our Very Online existences, these ruptures also speak to the film’s larger concern: to reclaim the screen and tease out its limits; to redefine and defy the medium, and what can be conveyed through it. The African Desperate is an electrifying, riveting odyssey, and Stingily—with her deadpan humor and no-nonsense swagger—makes its ending all the more cathartic.