Montclair Review: I Like It Here is a Captivating Present-Day Meditation on the Past 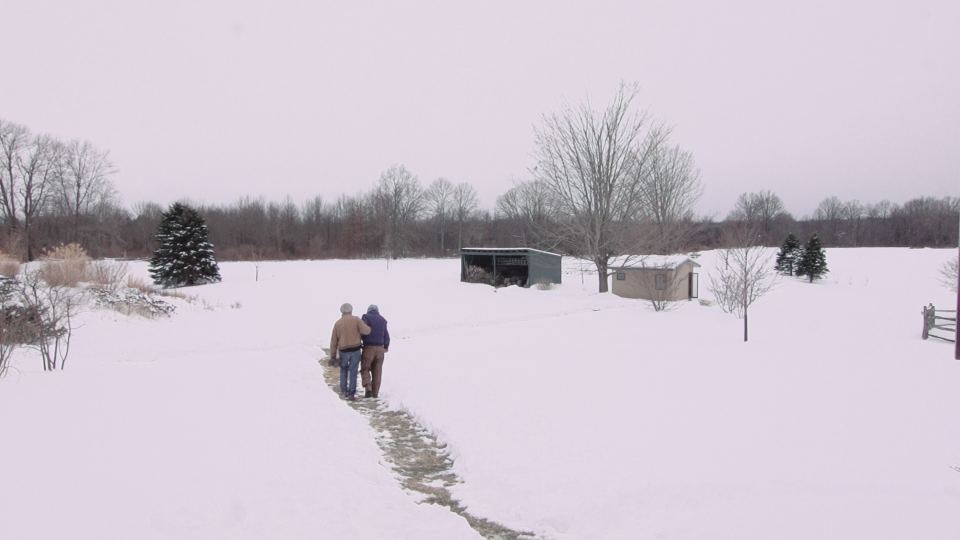 A meditation on growing old, growing wiser, and all of life’s transitions, Ralph Arlyck’s personal documentary I Like It Here is a warm, witty, loose, discursive essay film that jumps between past and present, old and new friends, lover, colleagues, neighbors, and family. And a portrait of a life well-lived: Arlyck meditates on growing old while still having the capacity to care for others, including his sons, grandchildren, wife, friends, and Ernie, a self-sufficient neighbor who lives in a remote cabin into his 90s.

A pioneer of experimental documentary, Arlyck draws upon an obsessive archive of life’s moments and material captured by others. Opening with drone footage shot by a filmmaker friend—presumably who dropped by to show off his technology—Arlyck finds simple poetry in everyday surroundings. It of course doesn’t hurt that he lives on a gorgeous upstate New York farm, not far from his old stomping grounds and close to new and old friends who seem inspired by the hippie ethos that brought many to Woodstock, just across the Hudson.

Here, Arlyck has made a nice life for himself, raising two caring sons (despite the fact they may not share Arlyck’s faith) who in turn start to worry about him. He engages in the kinds of pursuits around the house that seem dangerous when one turns 80, such as riding a bike or climbing a ladder.

Along the way I Like It Here revisits his old stomping grounds, e.g. the home he stayed in just down river at Vassar College. Despite its crumbling wallpaper, traces of the edit studio and projection booth his father built for him remain in the basement. Recalling the work of Jonas Mekas, Arlyck meditates on new and old friends including a filmmaker couple caring for him during the pandemic. Despite the fact he considers them colleagues and admires and respects their work, the age difference becomes apparent when they shop for him during COVID.

The pandemic is a minor character in a film, and in some ways makes this part of a new exciting line-up of films that are indirectly addressing the fallout of our COVID era. I Like It Here recalls a period younger folks called “Hot Vax Summer” when we were permitted to reconnect with and even expand our social circles as the world restarted and masks came off. Still, things were different––we had all changed and grown, and I Like It Here is indirectly, obsessively making sense of our perpetual march forward while looking back on the past.

Striking a sweet, often humous tone, Arlyck navigates aging gracefully with a keen awareness of how parent-child relationships morph as time proceeds. With a simple and direct approach narrated by Arlyck––who early on asks “so what?” as the film makes sense of the loose threads that equal a life––I Like It Here is a beautiful meditation on mortality.

I Like It Here world premiered at the Montclair Film Festival.