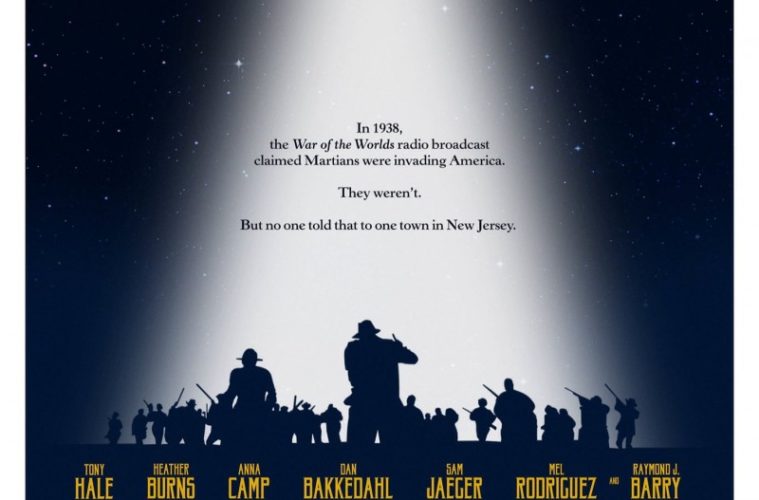 Welcome to Lullaby, NJ, population 506, the fictional town at the center of Jody Lambert’s delightful comedy Brave New Jersey “where strangers are friends and no one is a stranger.” Home of the Rotolactor, a robotic milking machine, the central New Jersey town is only a few hours from Grover’s Mills, the “epicenter” of the great October 1938 martian invasion chronicled in Orson Welles’ legendary War of the Worlds broadcast. Depicting this evening of misconstrued alien invasion, Lambert’s comedy is far more modest affair than the Tom Cruise film as Lullaby comes together for the biggest night in its history.

Reluctantly led by mayor Clark Hill (a restrained Tony Hale) who cautions against panic, he’s overruled by old Captain Collins (Raymond J. Barry), who is quick to formulate a plan based on his time in War War I. The do-or-die night also gives characters a chance at reflecting on their own lives, including Lorraine (Heather Burns) the wife of Rotolactor entrepreneur Paul (Sam Jaeger), who leaves his daughter and adopted Polish son Ziggy (Harp Sandman) to flee by automobile. Clark spends the night comforting her, while teacher Peg (Anna Camp) also decides the pre-ordinated safe small-town life and fiancé Chardy (Matt Oberg) just isn’t for her. Meanwhile, Reverend Ray (Dan Bakkedahl) rediscovers his religion in a moment of crisis. All is played for gentle laughs.

Written by Lambert and Michael Dowling, Brave New Jersey has a low key charm and embedded sincerity with a well-drawn ensemble that recalls many a created universe with rich characters, from Pleasantville to The Simpsons. With its light-hearted tone is spot-on, Brave New Jersey does unfortunately run out of steam right in the middle of its second act as the town takes up arms in the middle of the night before delivering a set piece in the third act.

Occasionally clunky pacing aside, the film is a delightful bit of cinematic comfort food as each character reacts differently to the hour-long broadcast, only hearing the first 40 minutes or so. An enterprising girl figures out it’s fake, while Mayor Hill at first seems unmoved. To be fair, Hill’s world view is limited — he’s rarely left town although he has been to “big city” Princeton.

Part of the pleasure is the film’s superb production design by Chloe Arbiture and art direction by Jonathan Bell, who have crafted an authentic and clean pre-World War II look that is a simple yet gorgeous. Depicting the last night of these characters’ lives, or so they think, Brave New Jersey is an elegant work of Americana with a gentle charm that’s hard not to be won over by.

Brave New Jersey screened at the Montclair Film Festival and will be released in theaters and VOD on August 4.