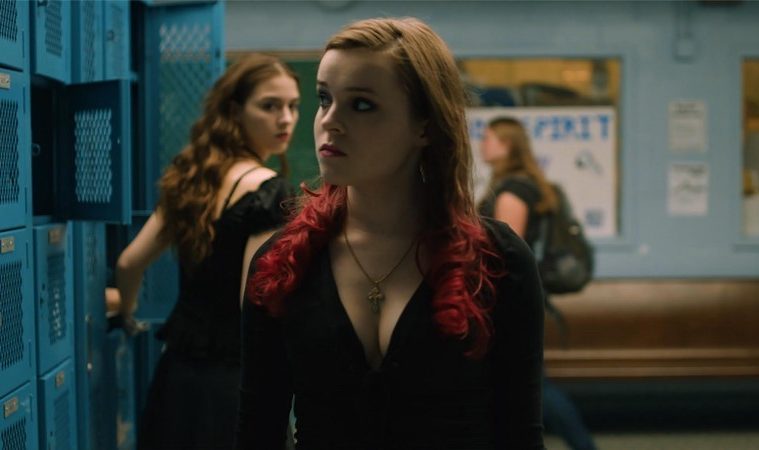 Blame, written, directed, edited, and starring 22-year-old Quinn Shephard, is an impressive debut feature that’s confident and assured, yet feels less like a feature film and more like an effective television drama with a few well-drawn characters and a multi-episode arc. Its asymmetric narrative doesn’t always work as it withholds information that might have fleshed out its supporting characters, and its message has been repeated over and over again in more dramatic thrillers. Yet, what this debut does achieve at times is an authentic portrait of high school life in the Jersey suburbs through a non-male, non-patriarchal gaze. These kids aren’t too cool for school played by young adults many years removed from high school, but in large part are realistic, three-dimensional characters with lead Melissa (Nadia Alexander), a punk rock cheerleader, being the most interesting.

Blame opens mid-school year as Jeremy (Chris Messina), a young and handsome substitute teacher, arrives to teach a high school English course. Melissa attempts to flirt with him and grows discouraged when he proves to be more interested in Abigail (Shephard), a dark and mysterious 11th grader who has just returned from “time off.” The exact nature of this break is a bit of a mystery, but Melissa and her cruel friends take to calling Abigail “Sybil,” which sets up a Carrie-like tension throughout the film. Abigail though seems to walk through the school unaffected by the treatment and is curiously wise beyond her years, capturing Jeremy’s attention.

In a rather on-the-nose plot twist, the English class is assigned Arthur Miller’s “The Crucible” as a project and break off into groups to adapt the story, with Abigail assigned the lead, chosen over Melissa. Soon after, Abigail finds herself performing alongside Jeremy while also co-directing the piece in moments that should attract the attention of the administration, especially in a close-knit school.

Blame’s focus is rather asymmetrical with Melissa providing most of the emotional core and motivation for the story while Abigail enters into, by all accounts, a consensual relationship with Jeremy, even if it should raise alarm bells. The flaw of the film is that it retains so much mystery around Abigail and some around Jeremy that his motivations are never quite clear as he debates texting her, and certainly knows better. It’s admirable Blame still contains subtle strands as a mean girl learns her lesson leaving a minor path of destruction in her wake. While we know the facts of a circumstance, we can never quite know what led to an incident occurring.

Well-acted and handsomely lensed by Aaron Kovalchik, Blame is an engaging debut that subverts the male gaze that might be associated with this kind of teacher/student relationship drama. It is objective without being titillating as it delivers low-key character driven thrills. While I wish the narrative was a bit more sophisticated in its approach to this material, there’s a lot of admire here.

Blame screened at the Montclair Film Festival and opens on January 5.