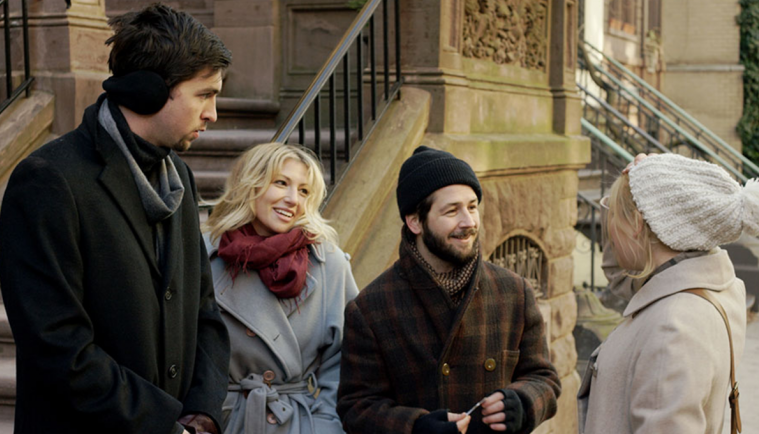 With a title that sounds a like a rehab facility, Michael Angarano’s Avenues is a spirited, micro-budget indie that recalls the New York City-based work of early Woody Allen with notes of John Cassavetes, Whit Stillman, and the Safdie brothers thrown in for good measure. These are excellent influences to aspire to, although the film’s narrative clutter and occasional missteps allow the scrappiness to show. Filmed quickly in a few days on the go, Avenues tells the story of Max (Angarano) as he mourns his bother Jack (who is never seen on screen) while passing time with his best friend Peter (Nicholas Braun), a sex therapist who has arrived in New York City for winter break. Peter is also about to break-up with his long-distance girlfriend who he’s en route to visit in Montreal.

With the entry of two blondes who just happen to be eating at a table next to them at one of two Indian restaurants next door to each other, it’s a lucky break for Jack and Peter. These newcomers are best friends, played by Adelaide Clemens and Ari Graynor, who agree to hang out with Jack and Peter, celebrating the former’s birthday.

Jack, a writer with writer’s block, finds himself back in the hotel room of his ex-girlfriend (Juno Temple, in a cameo role) where he’s tempted to sleep with her, much to the disappointment of his sister Maggie (Maya Kazan). The following day the table is set for an all-nighter in Brooklyn involving drugs, booze and revelations as the group sets out to celebrate Jack’s birthday.

Avenues’ charm is largely derived from its independent spirit. It’s a mumblecore-style picture with deeper influences than most and an independent film whose edges haven’t been sanded down in a development lab where sparse text rules the day. This is more or less free-form jazz orchestrated by Angarano, and there’s a natural sincerity between him and his ensemble, many of which he’s worked with before. Capturing Jack and Peter as they play off each other’s insecurities, this is a film made by a group of friends that, on the whole, works.

Avenues, though, is not free from a few clichés and over-the-top moments, including a walk in Washington Square Park that’s perhaps a bit too obvious. Then again, an eccentric New Yorker might just deconstruct a stranger he’s picked up in an Indian restaurant without shame. In a John Cassavetes film, I imagine he might even be a bit more desperate. A delightful first feature with a lot to admire and characters that are a bit more complex than they first appear, there’s a consistent charm to this type of relaxed indie made without much interference.

Avenues premiered at the Montclair Film Festival and will be released in theaters this summer.