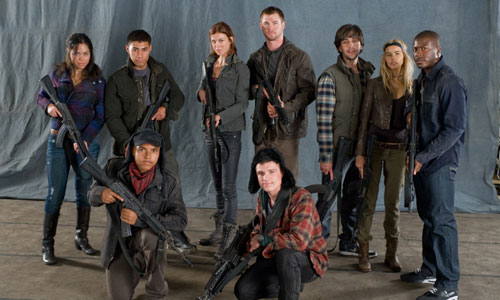 The road to the silver screen for the Red Dawn remake has been long, winding, confusing, aggravating, borderline offensive and, finally, tiresome. Open Road, who picked up distribution rights for the film for a November 2012 release late last year from Film District, appears to have dumped the film off…to Film District, which is now releasing the film on November 21st, 2012 [Box Office Mojo]. Both companies are in flux financially (when considering Film District’s underperforming Drive and Open Road’s disastrous Killer Elite last year), so the flip flop doesn’t seem so far-fetched.

Principal photography on the film began in September of 2009, working with a reported budget of around $60 million, a full three years before the film’s scheduled release date. After wrap, the remake suffered an array of setbacks, most notably the short-lived demise of its production company MGM and the controversy generated over the remake’s choice of villain: China. Due to the burgeoning Chinese entertainment market, MGM decided to spend an approximate $1 million to transform their baddies to be North Korean.

And still, the film has a fighting chance. The original Red Dawn survives with a surprising amount of cult cred. It announced the presence of a slew of young future stars, including Patrick Swayze, Charlie Sheen, Lea Thompson and Jennifer Grey. The remake, conversely, now has semi-established stars to its name, with Chris “Thor” Hemsworth and Josh “Hunger Games” Hutcherson, as well television star Adrianne Palicki and rising stars Josh Peck and Isabel Lucas.

Do you think Red Dawn will draw a crowd? Will you see it? Have you seen the original?