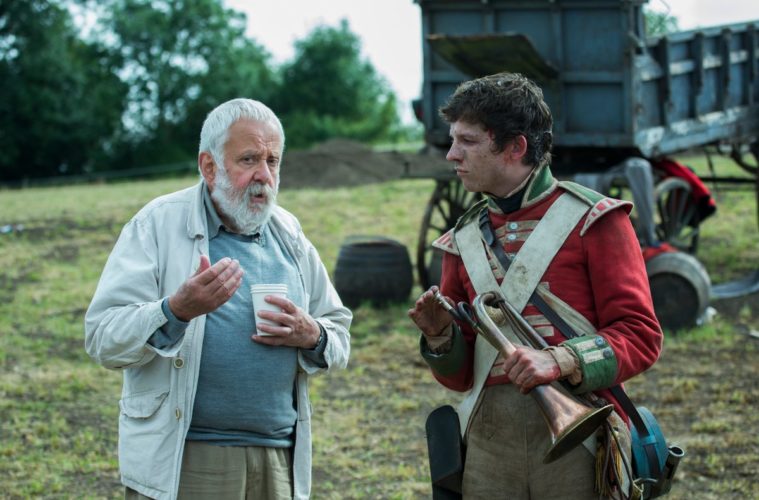 Mike Leigh on ‘Peterloo,’ Revolution, Agnès Varda, and the Disease of Trump

Mike Leigh spent much of his time since the release of Mr. Turner in 2014 discussing, researching, and filming the nature of political protest via the story of Peterloo. Political unrest is nothing new and the powerful have amazing resilience, as shown by the Manchester and Salford Yeomanry’s ability to slaughter 15 people and injure hundreds more at Peterloo, and in the process quell the chance at English revolution.

Why the United Kingdom didn’t have a revolution comparable to France, Italy or the United States was up for discussion when I recently sat down with Mike Leigh. In Peterloo, his career-long interest in class division meets the usually dry discussion of taxation. Leigh dedicates one scene to the Corn Laws, which lit the fire of revolution, and spends the rest of the film following the working-class political convergence that lead to the rally at St. Peter’s Field and the machinations of monarch who quelled it.

We discuss why it would be reductionist for Peterloo to have a central character, how the terms freedom and liberty were used in the 19th century, why the United Kingdom still has a monarch, and his relationship to Agnès Varda’s work.

The Film Stage: The message of freedom and liberty is repeated throughout the movie, but today the right wing own that message in Europe and America.

Mike Leigh: There’s a perversion of those words now. “Liberty or death” is in fact a phrase that originates from the American Revolution. There were a lot of slogans that were bandied around on the banners at Peterloo and things that were chanted at meetings. We have to remember we are looking at a society at a time where people did not enjoy the natural freedoms we do. There was no education. Two percent of the population had the vote. To put ourselves back in the population of those people, these are people at rock bottom. These people are passionate for liberty, freedom, the truth, and the voice to be heard. We can only really decode my movie in terms of how we are now and how we live now. When you see those working class young radicals in the film–those three lads, who are dramatized real people–those are guys with no formal education. They would have learned to read by being self taught or in Sunday Schools. Not only are they literate and articulate, they’re also quoting the Classics. They would be appalled to jump into a time machine and come forward to a time when people have the vote and don’t use it. Or have the vote and are cynical about it. Have education and flout it in the way literacy is being perverted.

The movie is about the peasants of two hundred years ago, but the political resonance of Peterloo continues in stories like Agnès Varda’s The Gleaners and I. Did you know Varda and her work?

I knew her personally, we met a few times. I loved her work. In fact, I remember in 1962 when I was very young and getting into movies, there was a whole season at the National Film Theatre in London called Left Bank, Right Bank, which included all of her stuff until then. I’ve followed Agnès’s films throughout. I think she’s great and I really, really regret her going. But she was ninety and she wasn’t very well.

For people unfamiliar with Peterloo, would it be helpful to see the movie through Joseph’s (David Moorst) experience?

No. I think the viewer has to go in and watch the film as he or she experiences it. Joseph is one narrative thread, therefore one perspective of what’s going on, but you can’t see the whole thing from his eyes because a great deal of what happens in the film is something he knows nothing about. He isn’t there, he doesn’t know what’s going on, and he wouldn’t understand it if he was there. I think it would be reductionist and distracting for anyone to try and look at the whole film as if it were from his point of view. That wouldn’t stack up.

Do you think the criticism that the film needs a central character to follow is incorrect?

It’s irrelevant. All of my films have been carried by one or two, or several characters. That’s what I naturally do. This film isn’t because, simply, that isn’t what the film is about. I haven’t made a decision not to have a central character because if I decided to have one I have no idea how I’d make that work. Of course, there are more central characters, and there are a few well-known actors playing the parts. But that’s neither here nor there. I don’t think it’s helpful to worry about that one way or another. It’s just a red herring, it’s irrelevant.

How do you dramatize the Corn Laws and taxation?

It’s a tough one, that’s a very good question. In fact, the actual principle of the Corn Laws and taxation are dealt with in one scene when the family is talking. It’s laid out very clearly, and it’s not laid out by people in Parliament making pompous, which might’ve been another way of doing it. It’s not laid out by journalists talking in educated language. It’s laid out in the kitchen with working class people at a very basic level. That’s how I dramatize it. As English school kids you learn about the Corn Laws and it’s dry stuff. Even though it’s not dry to understand people couldn’t eat properly.

Has the history and symbolic nature of Peterloo been utilized?

It hasn’t really. In the 19th century it resonated to those who knew it or were concerned with political matters, concerned with reform, concerned with unions and socialism. As the 19th century developed it resonated right through. It has got lost. I grew up in the area where it happened and I didn’t really know about it as a kid. I think it’s getting quite a revival because it’s bicentennial this August. There’s a growing awareness of it and its meaning. One of the reasons I made the movie to contribute to that… but I don’t really know the answer to the question. Are you participating in the bicentennial?

The other day I went to Manchester and opened a Peterloo exhibition at the so-called People’s History Museum, which is fantastic actually. They have a lot of artifacts, banners and stuff. There’s only one surviving banner that’s actually there. It’s kept in a refrigerated unit. This exhibition is interesting because they’ve allocated a large space for current protests to put stuff up and discuss. They show a section of my film but that’s my only contribution.

The phrygian red cap shows up in Peterloo, as it did at the French Revolution, and it’s on the seal of the U.S. Senate. You see it used all over the political map. Why is there a universal resonance?

My reading of it is limited to being a symbol of the French Revolution, which was a massive inspiration to the radicals at Peterloo and it terrified the hell out of authorities, not the least the royal family. They feared an English revolution. There has not been an English revolution, thought I suspect there’s about to be one any day now.

Why do you think the revolution that was building at Peterloo was quelled so easily whereas the American Revolution was not?

Apart from the fact that’s a good question [laughs], to which at some level there isn’t an answer, I don’t think we can quite… that’s a complicated question actually. The inevitability of the colonial war being lost is a much clearer and straightforward thing than the inevitability of an English revolution. The French Revolution, as we know, in the immediate moment it happened it was successful in the sense that they overthrew the monarchy, but it was followed by the Reign of Terror and that was followed by, effectively, the reinstatement of the monarchy, i.e. Napoleon and subsequently and actual monarchy which lasted for quite a long time. I don’t think you can compare the success of American independence with the aspirations of what was happening in England. In the film you see gradual levels of sedition by the radicals. At first they want one man one vote, then later a young man says they should assassinate the king. They were banged up and in prison far sooner than anybody else and were kept there for quite a while.

Why do we still have a monarch? I don’t fucking know. I think it’s ridiculous.

There’s so many large political movements lately. The revolt against Brexit and in France people on the left and right have joined together in Yellow Vests movement.

I think mass media has a lot to answer for, the internet has a lot to answer for. The dissemination of instant ideas both positive and negative, I think has got its upside and downside. I think what you can unquestionably call the general rise of fascism, which you could never have anticipated. Certainly in 1945 it would have been unthinkable and it was for quite a long time after that. How easy it is for draconian, destructive, negative, right-wing ideas to be disseminated. I think that accounts for Brexit, I think it accounts for the Yellow Vests, it accounts for what’s happening in Italy, and it could well account for the disease we call Trump.

Peterloo is now in limited release.