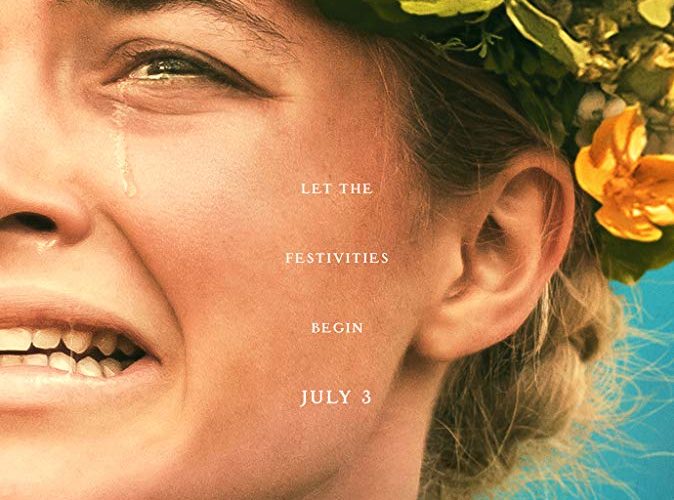 Ari Aster wants you to know you’re screwed–that is, if you’re on the wrong side of a deal with demons or deities. In the wake of last year’s wickedly captivating Hereditary, Aster’s whimsical daytime terror Midsommar is seemingly poised as the lamb being led to the sacrificial slaughter of the Sophomore Slump. Lo! Via divine intervention, or more likely Aster’s sharp grasp on the genre, Midsommar basks you in sunlight and dread to present something far more fun to unpack than its predecessor. The comparison holds weight not just because Midsommar deals with the same playful takes on Pagan-infused scare tactics that Hereditary does, but because notes of loss and helplessness run amok here. Aster’s tendencies toward despair create a sense of sobering inevitability while still managing to surprise with a bit of impish charm.

At the heart of his despair fantasy (Desp-airy Tale?) is Dani (Florence Pugh), a walking ball of anxiety situated on the losing end of an imminent breakup, only to be struck by tragedy in a manner manufactured for maximum gobsmacking (and maybe a pinch of incredulous laughter). The boyfriend in question, Christian (Jack Reynor), is mediocrity and emotional manipulation in hoodie form. Seeming put upon even in the face of Dani’s abysmal misfortune, he prolongs their relationship into the pit of status quo, ultimately granting a pity invite to his bro-trip to Sweden for all the pomp and circumstance of a local commune’s Midsommar festivities… and what a trip it is.

Upon their arrival, they’re met with a cultish warmth–all wide grins and off-putting enthusiasm. As this Wicker Man-meets-Burning Man getaway unfolds, every secret is met with an answer as brutally honest and transparent as the relentless sunshine. The rituals and ceremonies on display are so remarkably blunt that Aster doesn’t so much blindside the audience with horror, but rather pulls them toward it on a terrorizing conveyor belt of inescapable madness. With every unnerving peccadillo of the locals, Aster plants enough conspicuous red flags to lure you into the comfort of expectation. You feel safe not because there are no demons, but because you’ve seen this movie, and you know what’s in store. It’s a wonderful device, giving viewers just enough rope to hang themselves when everything culminates for our wayward travelers, entertaining not with cheap shocks, but with substantial and fascinating displays of an accepted insanity.

This creeping descent into lunacy is the great, patient con of Midsommar, and would be impossible were it not for Aster’s all-too-real rendering of his players. Both Pugh’s Dani and Reynor’s Christian (as well as their counterparts in William Jackson Harper, Will Poulter, et al) are gifted with an embarrassingly painful relatability. If we don’t know them, we are them. We’ve shrugged like them, we’ve sobbed like them, and we’ve traded petty barbs like them. Pugh alone deserves high praise, as she sinks her very core into every facial contortion and guttural bellow.

With this as his bedrock, Aster lulls you along to a truly whacked out, floral fever dream. In the calamity you might ask, “How did we get here?”, like lovers in any doomed relationship. As is usually the case, the warning signs were there all along. Maybe you missed them. Worse yet, maybe you saw them and were powerless to stop. Either way, you’re screwed.