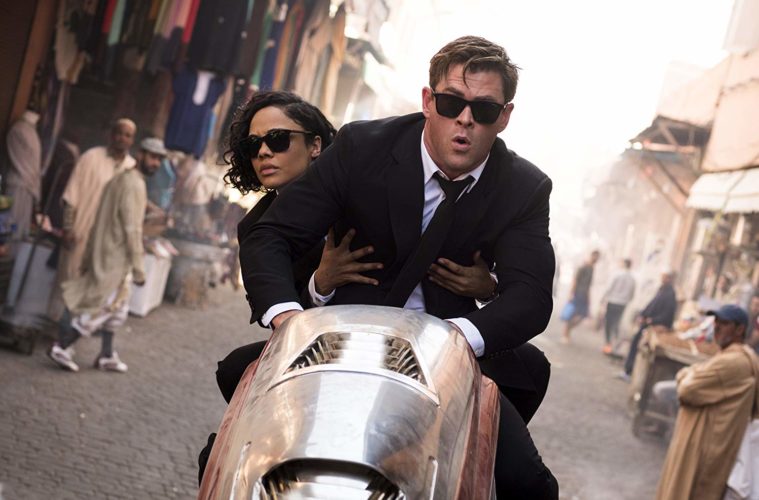 A million years (actually 22/23 years) ago, the world was given two Will Smith-starring, alien-fighting blockbusters within 364 days of one another. And though many remember Independence Day fondly, Men In Black has revealed itself over time to be entertainment of the highest order. At a lean 97 minutes, the 1997 Barry Sonnenfeld picture introduced a deceivingly simply premise (a F.B.I. & C.I.A. hybrid agency to deal with refugee extra-terrestials), a startlingly imaginative world, and a new side of Oscar winner Tommy Lee Jones; all of this while reaffirming that Smith was the maybe the most likable person alive.

Over two decades and a couple of underwhelming sequels later, director F. Gary Gray sets out to do something similar with Men in Black: International. We are presented with relatively fresh stars in the form of Chris Hemsworth, playing Agent H, and Tessa Thompson, playing Agent M. H is a hotshot who saved the world once alongside High T (Liam Neeson), but has been off his game as of late. M is a MIB superfan who finally discovers their secret headquarters after twenty years of searching. Both characters are given an establishing scene that will most assuredly and most obviously pay off later on. Paired together on a whim of sorts, H & M stumble upon the potential of a mole within the agency.

Written by franchise stalwarts Matt Holloway & Art Marcum, the going gets tough early as any sort of initiation for M is zipped through quickly. It’s a welcome awareness by the filmmakers, getting to the point in this fourth film in the well-worn series. Gray has always been a capable director of action if never a standout. Any set pieces here work best when introducing multitudes of fun creatures as well as showing off top-notch set and prop design.

Hemsworth and Thompson mine some easy chemistry, though never nearing the perfect alchemy of Smith and Jones before them. The true standout is Kumail Nanjiani, putting in memorable voice work as sidekick Pawny, who pledges his allegiance to M whilst deciding he is not a fan of H. Nearly every joke lands when delivered by the saucy little alien, Nanjiani’s mannerisms matched nicely in the design of the creature. Emma Thompson reprises her role from MIB 3 in a couple of brief-but-welcome scenes, while Rebecca Ferguson gets to chew some scenery halfway through in a wig for the ages.

Gray takes few chances narratively, providing the viewer a fairly standard blueprint of where the film is going to go. That said, Holloway & Marcum utilize the rules of the franchise well, incorporating a couple of twists that feel fresh if not altogether unexpected. The camera clearly loves Tessa Thompson, continuing to promise a bright future for the young actress. As for Hemsworth, here’s hoping he continues to play funny. This is breezy stuff, a welcome respite in the hot summer months.