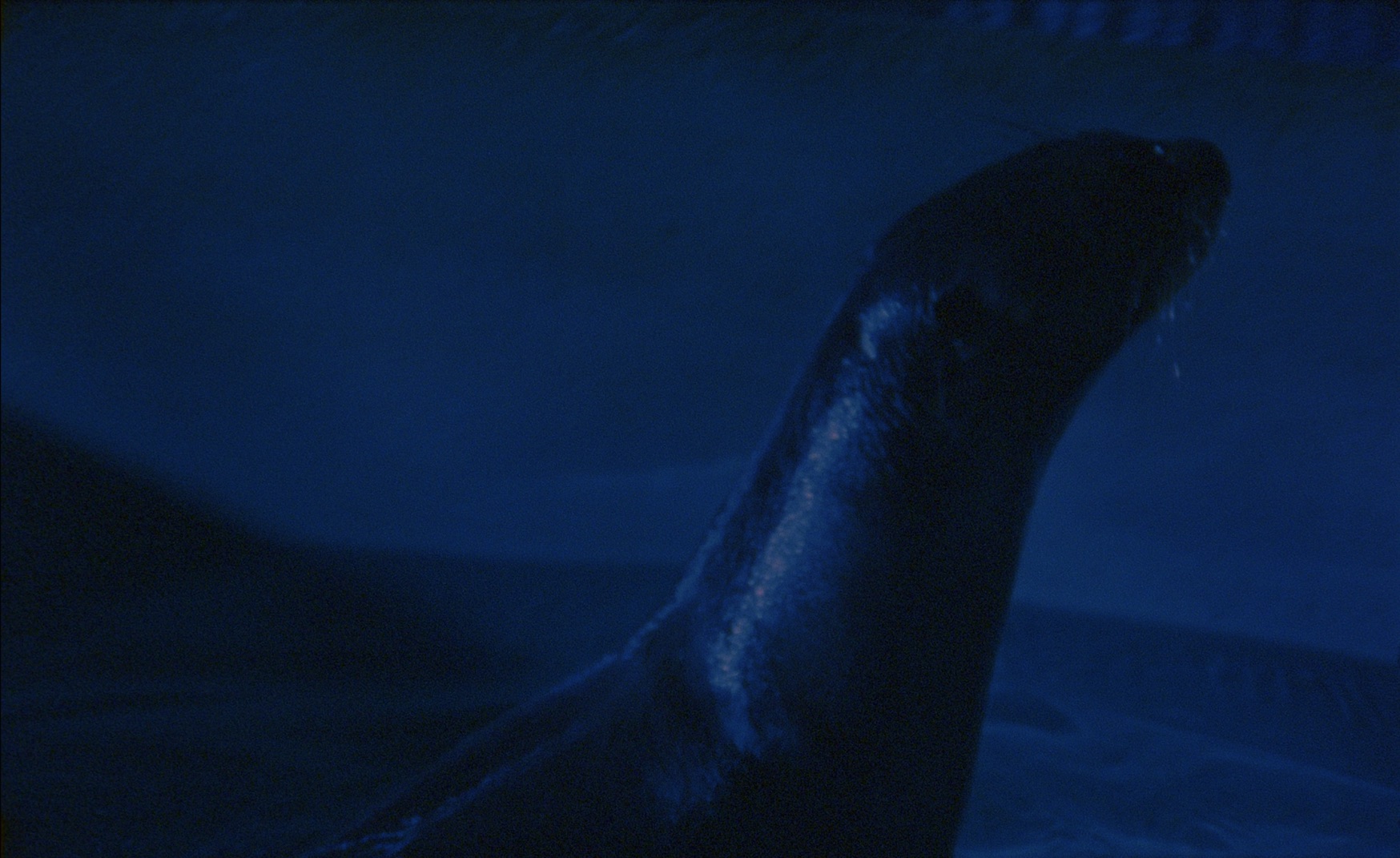 The few people bobbing up in Ana Vaz’s It Is Night in America are anonymous ciphers, their faces scarcely (if at all) visible, protruding limbs or silhouettes pressed against the concrete. Night, Vaz’s first feature, is a caliginous foray into the animal world hidden in and around Brasilia, where humans take a backseat and the megacity stands as a skyscraper-infested jungle. The film’s protagonists are a pantheon of exiles: monkeys bolting across streets, cobras hiding in private gardens, capybaras resting on lawns, giant otters roaming water ducts. “Are animals invading our cities,” a voice wonders halfway through, “or are we occupying their habitat?” It’s a question that might as well double as a tagline, but Night has a way of stretching and expanding its focus, and its close-up portraits of the capital’s fauna swell into something else entirely. Gradually, the film becomes a story of an invasion—a study of Brazil’s rampant urbanization and the creatures it made homeless. It becomes a tale of two cities, of two kingdoms fighting in a zero-sum game. It becomes a Western.

As a backdrop, Brasilia provides the perfect battleground. The city’s history is rooted in a restless cycle of turf wars, violence, and displacement. Built in the late 1950s after then-president Juscelino Kubitscheck ordered the capital be moved from Rio de Janeiro to a more central location, it was originally conceived as an urban utopia that would group together people from all walks of life. But its growth soon spurred all manner of segregation schemes, a series of government-backed efforts that kept indigents and migrants away from the new Eden. The tension is felt everywhere in Night, which kicks off with a dizzying pan across Brasilia’s skylines before dropping us at ground level and venturing on a parade of exotic animals caught prowling streets and lawns.

Vaz intersperses glimpses of the local fauna—a garrulous bunch featuring birds of prey, reptiles, and all kinds of mammals—with a few phone calls from alarmed citizens asking cops to remove the unwanted trespassers. In one such rescue op we follow forest police officers as they pick up a wood fox from a garden and deliver it to a clinic. “I often joke that our ward is made of refugees,” says the vet (credited under her name and her species’, as every other living being in Night), and the analogy ricochets throughout. This is, in some ways, a real-time chronicle of an extinction; for every “refugee” rescued and shipped to Brasilia’s zoo, where much of this film is shot, there are countless more who could not adapt to the new environment and were misplaced (or killed) by the new landlords.

But that would only account for a fraction of Night’s scope. Concerned as she is with the disappearance of Brasilia’s fauna, Vaz is also intrigued by another kind of extinction, that of the image itself. The film was shot in 16mm, and the director (working as her own cinematographer) relies on a day-by-night technique widely used in early days of filmmaking, which here douses nearly all frames in a blue palette. The metropolis Vaz captures as she traverses its streets, the camera fixed to the roof of a car, is a continuous locomotion of twilights and shadows; even daytime shots look like they’ve been yanked from an endless dusk. The choice graces Night with a lunar, near-extraterrestrial beauty, yet also brings it in conversation with film history through the materiality (and perishability) of its images. There is between the Night’s exotic creatures and Vaz’s analogue filmmaking an unlikely connection rooted in their mutual and inevitable disappearance. And Vaz doubles down on that decay by embracing not just the themes, but very aesthetic of the Western: the day-for-night technique (“Nuit Américaine” in French, hence the film’s title) reached its peak during the genre’s heyday.

Yet for all its apocalyptic mood—amplified by Guilherme Vaz’s soundscape, a symphony that blends urban noises with horns and percussions—Night maintains a combative, subversive zing. Not only does it elide humans from the frame, focusing instead on beings modernity has made all but invisible. It also purposely troubles our understanding of what its images might mean, where they may come from, how they should be read. The rare times Vaz chimes in with a kind of commentary—aside from the few phone calls and chats at the vet—she relies on an invisible narrator who speaks in gualín, an argot of inverted syllables and reshuffled words (think of it as a Brazilian version of the French verlan). The choice has a distancing and confounding effect that Vaz extends to both Portuguese and English-speaking viewers—subtitles are tweaked to reflect gualín’s somersaulting across grammar and syntax.

But it also feels of a piece with the film’s overall goal: to question and challenge the human gaze as our only entry into the world. To be following Vaz down her crepuscular voyage is to reckon with the fragility of the images she records and of the creatures who populate them. It is also to adjust to and embrace new ways of seeing, a cognitive dissonance designed to rejig our relationship with her subjects and the medium itself. As with every epiphany, It Is Night in America is both unsettling and liberating.

It Is Night in America premiered at the Locarno Film Festival.