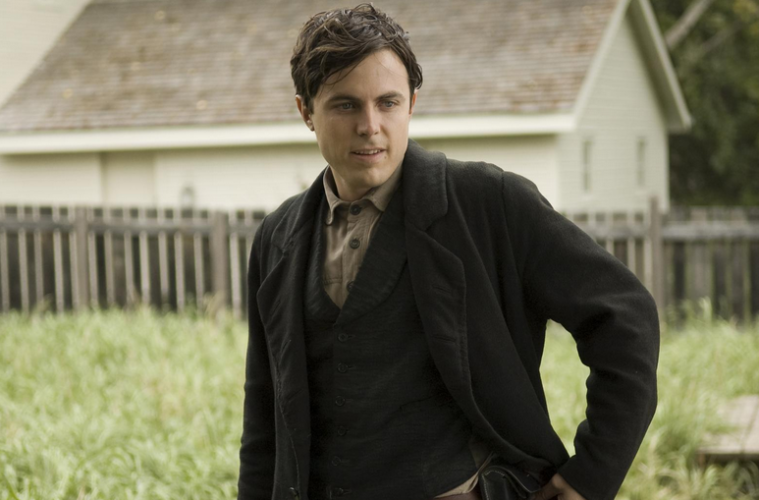 Living in the Shadow of ‘Jesse James’: An Appreciation of Casey Affleck’s Best Performance

“What I was looking for, with Bob, was a person who understood what it was like to be in someone’s shadow, you know? The first time I saw Casey [Affleck] was in the movie Gerry. I had photos of Robert Ford; I had this photo of Robert Ford that I used to look at, and he was a boy. He was just a boy, really. And I saw this guy, in Gerry, and I thought, ‘Oh my God, it’s fucking Robert Ford.’ I thought, ‘Oh, he’s Ben Affleck‘s little brother. He knows what it’s like to be ignored.’ He has that voice, you know? That really fragile voice that always sounds like it’s about to break? That’s what I was looking for: I was looking for a really hurt boy.”

– Andrew Dominik, writer and director of The Assassination of Jesse James by the Coward Robert Ford

Something is always happening behind the eyes of Robert Ford, and whether the source of these glares is immediately recognizable (in awe-filled admiration of his fellow, also-eponymous cohort) or something more impenetrable, something we may rather not understand (the case of that titular killing), its single source is a form of actorly commitment that seems to be taken for granted in the 21st century. One would only be right when pointing toward any number of examples as some exemplary aspect of Casey Affleck’s performance in The Assassination of Jesse James by the Coward Robert Ford, but I’ve never been able to entirely overcome the mystery of what, precisely, is happening with those eyes: are they the windows into a naïve man’s soul, or just another front by someone whose existence is capable of nary an original thought and action?

I’d like to think an answer always rested in the title, that the second name is primarily organized as some shameful, venomous predicate to the towering, iconic subject we’d barely struggle to conjure any image of more than thirteen decades after his passing — yet, less than two minutes into its runtime, with no more than a seemingly ancillary notice of one man’s blinking patterns, does Andrew Dominik’s picture tip us off that perceptions (even those broadcast by an omniscient, smooth-toned narrator) cannot be taken as fact. This Robert Ford, though indeed the assassin of Jesse James, is neither a coward or gun-toting scourge of the Old West, but something sadder, more frightening, and, unlike his counterparts, less recognizable as a figure of any specific era.

If Casey Affleck had truly fallen in Andrew Dominik’s hands as the writer-director would tell it, this particular conjoining of performer and part would, here, necessitate some consideration as far as matters of physical representation go. While it’d be impossible to determine the extent to which Affleck, the performer, and Ford, the character — it would almost make sense to consider him “Ford,” quotation marks and all, if only for the ambivalence-tinged, secondhand nature of Dominik adapting Ron Hansen’s historical account — blend into one another (we don’t know every inch of the production process, after all), the uncertainty bred by this matter should only fuel an appreciation of the work: the mannered qualities which feel so specific to Affleck are, too, a part of Ford, with new emotional ranges arising from an unpredictable litany of facial expressions and crackly voice as if they were a botfly making its way out of infected skin.

Much like the rough, dusty clothing these men wear and the creaky chairs they sit upon, Affleck’s gestures feel ingrained into something larger, more than any performance given in recent American cinema; if “Robert Ford” is the result of “naturalism,” as we might be so inclined to call it, what we’re seeing is Affleck’s naturalistic incarnation of perpetual fabrication. From the opening onward, he’s a character stripped away bit by bit, often at the doing of Jesse James himself — be it the there-is-no-Santa reveal that the latter’s dimestore adventures were “all lies”; his various humiliations among a gang we might suspect Ford is too fragile and precious to be involved with; or time spent in the legend’s home, at which point the “do you want to be like me, or do you want to be me?” concept bleeds into narrative action — until who we have, ultimately, is useless, a man almost akin to a meal that’s emerged from the oven burned and rubbery. Affleck is something of a blank slate, his impressionable face so frequently shaped and reshaped by what people are saying and doing around him until he, finally, finds some sense of purpose in violence, but nevertheless a sense of purpose that might have only stuck in the first place because it was simply anything to begin with.

“I think the movie’s really about anxiety and depression: what you’ve got is a very depressed character, Jesse James, who’s kind of, like, wandering through his life, trapped by his younger self. You’ve got Bob, who’s a person who just wants to own the spot that he’s standing on; he doesn’t feel like he has any place in the world, and he desperately feels like, if he could be Jesse James, he would feel humanity in the world. He’s really confused by him, because Jesse doesn’t seem to be wrapped up in this coat of armor at all. He’s, like, a fucked-up dude.

Casey came up with this idea of the jackal. Bob is like a jackal: he’s the sort of person who hangs around the edge of where all the other people are feeding, he waits until they’re gone, and then he runs in and grabs his little scraps. He started acting like a jackal. The jackal was actually a joke, but he’s really into, like, all that acting theory stuff. Casey took the idea seriously, and he became the jackal; the jackal was something that he could… we knew what it meant; I would say to him, when we were shooting, ‘Be the jackal,’ and he he would know exactly what to do.” – Andrew Dominik What, I think, makes Assassination’s half-step-removed approach significant, not merely some artistic affectation, comes down to two intertwined qualities: that Ford and James are initially pitted as diametric opposites — parallel lines of a personal fact and a public fiction that eventually cross over, clash, switch places, but only return to their original position by picture’s end (“There would be no eulogies for Bob”) — and that Dominik’s film acts as a form of historical reconciliation and restoration, giving Ford the stage that all others had so swiftly denied them. One cannot imagine it playing out like so if either end had been cast differently: placed against one another, Brad Pitt’s James and Affleck’s Ford — performances given by men who members of the public would claim to understand in extremely divergent capacities — seem incapable of existing without each other, their complement, both in spite and because of differences that are writ on a cosmic scale through the powers of western iconography; if what we have is not precisely the sort of 50-50, yin-yang dynamic so many other storytellers would be keen to indulge in, Dominik’s groove is, perhaps, a balance of 70-30, the struggle coming down to one empty man’s desire to make himself a whole figure — an action only made possible through personal ingestion-by-killing.

But he never crosses that threshold, and Affleck’s always-juvenile mannerisms — originally affable, if not in a somewhat pathetic sense — fulfill the character’s trajectory: now, more than ever, his tics and twitches feel ready to explode, and when the violence does eventually settle in — most notably the brutal attack on an audience member, as he’s seemingly ready to attack any man in sight; less aggressively via the antipathy-fueled gunshot cast into a barroom floor — it comes as something of an inevitability, yet not one we can fully understand. The looks of resentment carried on his face remain nearly impenetrable; is Robert Ford angry because he got what he wanted and it turned out a disappointment, or did Robert Ford never really know what he wanted in the first place? What was the point of carrying out an assassination of Jesse James when no applause ever came?

I question whether Assassination ever truly provides a decent answer to the mysteries behind its central figure, and I wouldn’t have it any other way when Robert Ford, on the screen, is exactly and only what Affleck gives us in these moments, at these junctures. The performance is a bit of a magic trick, and the best magic tricks don’t go explained; they simply live and breathe before our eyes, even as none of it conforms to comprehension.

The Jesse James Revival kicks off on Saturday, December 7th at the Museum of the Moving Image. Be sure to check out other Jesse James appreciations at HitFix, Ain’t It Cool News, Film.com, and Film School Rejects throughout this week.