Listen: Quentin Tarantino and Paul Thomas Anderson Discuss ‘Once Upon a Time in Hollywood’ 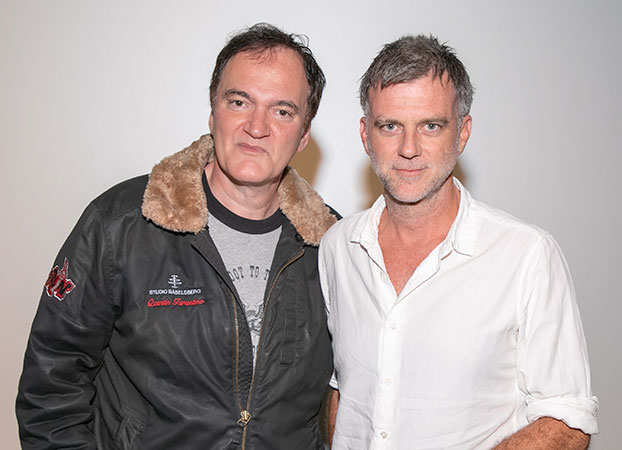 We’ll be hearing many conversations with Quentin Tarantino over the six months as Once Upon a Time in Hollywood segues from its theatrical run to awards season, but in terms of moderators, it won’t get better than what we have today. For a recent Directors Guild of America Q&A, Paul Thomas Anderson spoke with the director–continuing their conversation during The Hateful Eight’s release–as they discussed his 1969-set feature, revising the legacy of Sharon Tate, Brad Pitt’s idea for his own scars, pulling off the Spahn Ranch sequence, and much more.

Check out the best takeaways below, followed by the full talk.

Paul Thomas Anderson has seen the film 4.5 times–and adores it.

PTA: This is the most magnificent film. I have seen it four and half times now… one of the things I love about this movie is how much joy there is in it. Just pure joy and your movies always have the joy of making the movie and that they are always filled with that, but there’s something else going on here in this movie that you haven’t had before. I can’t quite put my finger on it, but it’s like the world’s expert made a movie about the thing he knows most about, which is the movies, this city, and the humanity of it.

PTA: F*cking Quentin took care of the neon signs in LA. Like you stopped a minute to even take care of that, which living in the city… it’s such a beautiful moment when that happens, when the sun’s just going down and the lights come on and [The Rolling] Stones’ “Out of Time” is playing. I leaned over to you [and said], It breaks my heart. It absolutely breaks my f*cking heart because you feel that inevitability coming as that song is coming.

QT: “I gave myself two weeks to shoot there, uninterrupted, and then a little bit of leeway if I needed to, even as much up to four days. The point being to not really work anything. The point was I had maybe one of the best sets I’ve ever had in my life. I thought [production designer] Barbara Ling and set decorator [Nancy Haigh] did just a fantastic job with Spahn Ranch and I couldn’t believe it…it was eerie creepy about how great it was. The actors were fantastic. I’ve never worked with a group of young actors that much. All that body language they had, I didn’t have to teach them f*cking sh*t. They just knew all that Manson stuff, that family stuff, they all worked all that stuff out together. It was just right there. Then it was literally just: put the camera on the crane and keep inventing the shots. And doing it in order, so in case something cool happens or we do something neat or whatever, now we can continue on with it. So everything will build to everything else. It was steady as she goes.”

PTA on Leonardo DiCaprio, who he was reportedly courting for his next film:

PTA: Leo is consistently–when he decides to be–the f*cking funniest actor in Hollywood. Right? When he flips that switch….

QT: But truly, what’s so funny about him is that he’s not playing it funny. He’s playing it so f*cking serious. And that’s what so ridiculous.

PTA: Absolutely. His full commitment to that “sexy Hamlet.” [Laughs.]

The fact that she is a person cosigned to history for the most part defined completely and utterly by her tragic death. And in these last four weeks people have watched Margot [Robbie] play this person and they saw that she was more that. She was a lovely person and they get a sense of her spirit and they get a sense of her life and you actually watch her doing things people do in a life–watching errands, driving a car, just doing life stuff, and you even got to see the real Sharon juxtaposed into that. And now I actually think that people will think about her differently than they thought before. It’s not the beginning and end-all of Sharon. There’s still more to learn about her and everything, but I think saving her from her tombstone, the movie has done that to a small degree, but I think a significant degree.

Listen to the full talk below, along with our discussion from The Film Stage Show.