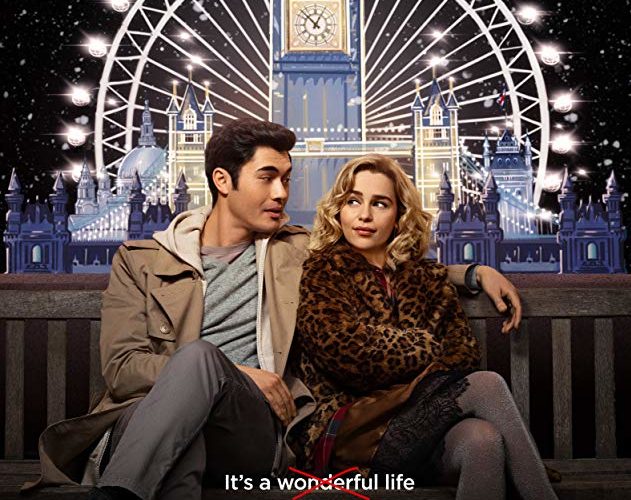 It’s nice to have a Christmas movie in theaters. It’s also nice to watch two lead performers get to know each other on screen, and appear to genuinely enjoy each other’s company. With Last Christmas, directed by Paul Feig, viewers get two-for-one. Starring Emilia Clarke as Kate and Henry Golding as the mysterious do-gooder who has captured her eye, there exists a light-hearted energy throughout that is seasoned with a bit of complexity. Considering the film is co-written by Emma Thompson (from a story by her and husband Greg Wise), this is no surprise. Kate works as an “Elf” at a Christmas shop in London, her tough-but-fair boss taking on the brand-conscious name “Santa” (Michelle Yeoh, having a lot of fun) and constantly criticizing her employee of being lazy. We learn that Kate was “really sick” a couple of years back and is still coping, whether she likes it or not. Her mother (Thompson) won’t stop worrying about her, her sister (Lydia Leonard) is tired of worrying about her and her father (Boris Isaković) refuses to get out his cab at night to deal with his family, especially his wife.

Once Tom (Golding) comes into her life, things begin to take shape. Though largely perfunctory, his presence is surely welcome. Where the story goes from here one can probably guess, or at least get halfway there. Thompson and her co-writer Bryony Kimmings are breaking no new ground in the plot mechanics of Christmas movies, save the addition of some Brexit-fused social commentary. You see, Kate’s family emigrated from former Yugoslavia many years ago and her mother watches the television with a distinct fear of more-of-the-same in the U.K. This influx of Thompson’s patented liberalism is welcome, though not overwhelming. The reason to watch is Clarke and Golding, who look more like movie stars than they ever have before. Most of their quippy banter works while selling the pre-packaged joy of the Christmas Spirit. All involved seem to acknowledge the inherent cynicism of a studio picture like this, though they never allow it to devolve into a negative experience.

There are legitimately affecting moments throughout, not to mention a real, near-deep exploration of depression and its effects on those in your life. It’s about as lovely to see Michelle Yeoh flirt as it is to see Emma Thompson perform at her most hammy. Clarke has been angling at legit leading lady status ever since she got called Khaleesi, to varying degrees of success. Last Christmas feels like the young actress is in full form. Forget the perceived genre limitations, this is a good performance. Her Kate is cutting, manipulative, charming, broken and funny. All at once! She’s fully human, a refreshing departure from some of her recent roles.

And while the Tom character may not get the same attention, that Henry Golding sure is something to look at. It may well be that Last Christmas‘s most memorable decision is shifting the oft-criticized Male Gaze over to Female. Let’s call it a Christmas miracle.