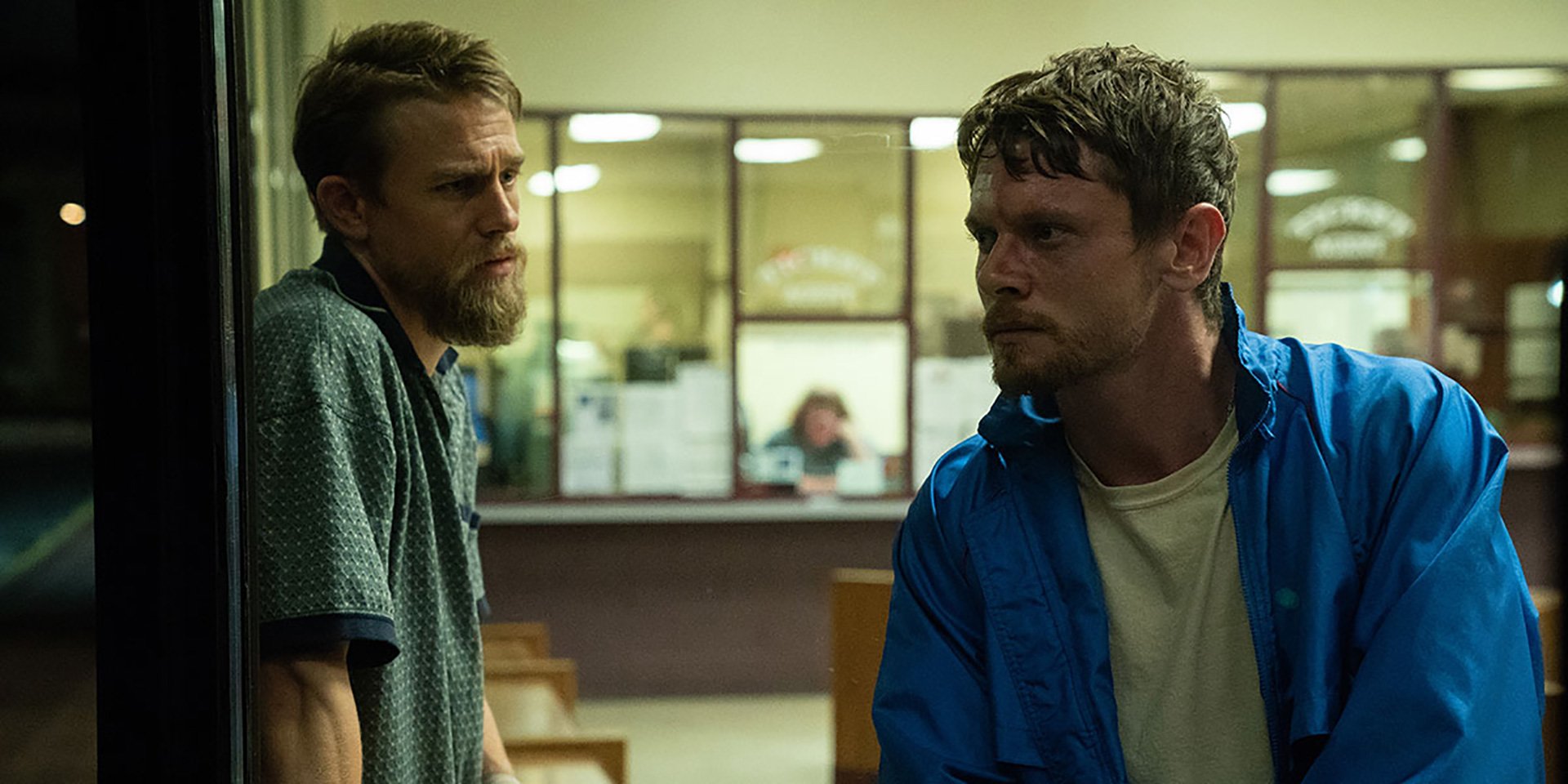 Director Max Winkler (who co-wrote with Theodore Bressman and David Branson Smith) opens his latest film Jungleland with a great reveal. We meet Stanley (Charlie Hunnam) as he wakes his younger brother Lion (Jack O’Connell) up, staring out the window with a huge grin on his face. He’s talking about the future and how it’s paved with gold. California is in sights, boxing stardom is in reach, and all they have to do is win this fight. So Lion gets out of bed, does some training, and readies to make their dreams come true with his fists. But instead of watching them exit their home, hotel room, or wherever, Winkler moves the camera outside a repossessed building’s door so the Kaminsky siblings can lower themselves out a window.

Lion isn’t therefore a professional fighter. He’s a once promising prospect now relegated to bare-knuckle tickets organized in basements with purses barely worth the trouble. Stan keeps appearances up nonetheless, though, walking around in pressed dress shirts with an air of success everywhere he turns. To him Lion is their ticket out. He’s screwed up the kid’s dream before and knows his trust in him is tenuous at best if he ever decided to truly take stock in the good and bad of their connected lives. So he keeps Lion in the dark on certain details like borrowing cash from a local heavy (Jonathan Majors’ Pepper) to bet on his brother and turn modest earnings into less modest winnings. Squatting unfortunately proves that such tactics aren’t foolproof.

This is what they do, though. It’s what they know. Stan gets them into sketchy scenarios and Lion punches his way out. They live fight to fight on scraps with nothing but an undying love that’s bound them since their mother’s death. And now they’re running again—or at least they should be if Pepper didn’t know better to scoop them up first. Stan owes him now. Pepper in effect owns them. So what he offers is less a proposition than a demand. He’ll pull strings to get Lion on a lucrative ticket in San Francisco if the brothers agree to drive a “friend of the family” (Jessica Barden’s Sky) cross-country on the way. Drop her off in Vegas, continue to the coast, and get rich.

You guessed it: this quid pro quo isn’t exactly that simple. There’s Sky’s background to consider. There’s her destination into a monster’s clutches (John Cullum’s Yates). And there’s the matter of Stanley and Lion needing to figure out what’s more important: this girl’s life or their own? That’s what things boil down to. Drop Sky off while looking the other way and keep going to the fight. Let her go and know bad men will be waiting to kill them. Or try and fall off the map completely with no money, no prospects, and the last chance at proving Lion’s talents expired. He ultimately holds the deciding vote. Side with Stan and lose a piece of themselves or side with Sky and risk losing their lives.

That sounds clichéd and familiar because Jungleland is very much both those things. Characters arrive to make their lives difficult at the start while others stay hidden until it’s their turn to do the same. So Stan, Lion, and Sky are more or less sandwiched by oblivion. Forwards and backwards hold no solace. The only place where they’re seemingly safe is on the journey itself. And they do have some fun. They do try and make the best of it. But you can’t ignore your fate forever. Eventually you have to face the demons to either side and pick a direction. They’ve each led a life that was never built with an escape hatch. Staying alive will never be living since someone will always be following close behind.

It won’t therefore be difficult to figure out any narrative progressions. Lion is too sensitive to let things unfold as agreed and Stan is too determined to let him ruin this opportunity. So they use each other, turn on each other, and inevitably arrive at a confrontation that’s surely been years in the making. Who really has control in their relationship? Who is more valuable? Have they done all that they have just to sacrifice their souls for nothing more than a chance at happiness? Or will they find the courage to stand-up, not only to each other, but also to the world that’s done everything in its power to keep them down? And how far will they go to preserve what they have upon realizing it’s enough?

These are the questions being asked throughout the film and they are as simplistic as they read. Just because you won’t find any profound revelations, though, doesn’t mean the experience is without merit. One could argue that the script’s shortcomings are the actors’ gain since they’re each asked to render the emotional beats authentic despite their convenience. It helps that they all know their failings internally no matter how vehemently they argue against them out loud. They know they’ve messed up and will continue to do so over and over again, but Hunnam, O’Connell, and Barden each find a way to make that self-awareness endearingly palpable. It allows the moments when they scream at each other to expose how they’re driven by fear rather than anger.

And that’s key. That’s what makes them vulnerable, fallible, and worth our desire to see them succeed despite so much trouble awaiting them at the end. That conclusion is dripping with sentimentality insofar as atonement, hope, and a promise for the future are concerned, but such unrepentant earnestness is itself a welcome trait. Barden stands out thanks to being the outlier with more secrets than her traveling buddies and O’Connell is great as ever playing the underestimated meal ticket living in his brother’s shadow. But it’s Hunnam who may surprise you as the film’s passionate heart. There’s always more than meets the eye with his Stanley as intentions overshadow actions until he winds up exactly where he vowed he’d never return—this time for the right reasons.