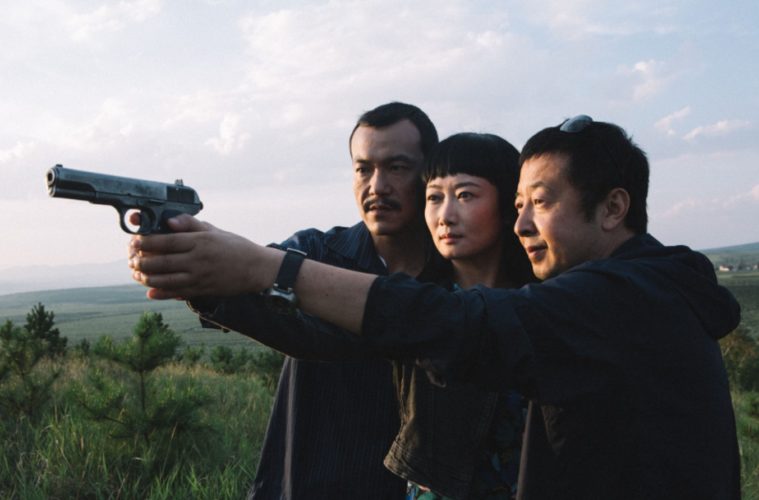 Jia Zhangke is one of contemporary China’s certified masters, and his newest work Ash is Purest White marks a key point in an ongoing dance between social-realist drama and genre exploits, starring (you guessed it!) Zhao Tao as a woman whose scorn launches a 17-year redemption jag populated with observations of her changing nation and a desire not unlike revenge.

“A lot going on here,” to use today’s parlance. More than most native-born American audiences are liable to pick up, actually, which is okay: the pleasures of Zhao’s gangster life and subsequent, Remember My Name-esque reintroduction to a world she tries to once again make her own are so intense that both viewings left me thinking, even if only for certain stretches, that I was watching the most entertaining film ever made. To say I anticipated this interview is an understatement.

Special thanks to Vincent Chang, who provided on-site translation.

The Film Stage: Ash is Purest White‘s use of “YMCA” got a huge response–one of laughter and jubilance–from the NYFF crowd, which made me wonder about your taste for popular music (e.g. “Go West” in Mountains May Depart). Are you courting humor with outlandish songs, sincerely expressing nostalgia and generational documentation, or maybe something in-between?

Jia Zhangke: Pop culture plays a very important role for my generation. In the formative years for most people in our generation, you’re right on the cusp of after the cultural revolution; then comes the reform and open-door policy. I think that’s the juncture–that, before that, you didn’t have anything in terms of pop culture. In entertainment, everything is propagandized or about the collectives. Whereas, at the end of the cultural revolution, and with an open-door policy, we started to have this influx of pop culture from Hong Kong, Taiwan, the United States, and the music that we were listening to really reflected on the rebellious nature of the generations.

These are people in their youth, and they are carrying that kind of rebellious nature. They are craving freedom and individuality because they have been listening to propaganda for such a long time and are thinking about the group, the collectives, during the cultural revolution. Now, suddenly, they will be able to express themselves and their individuality against what was before. So I do think that, during that time, every year you would have one or two songs that really capture that collective emotion, collective psyche, and collective memory. “YMCA” and “Go West” happened to be songs that really trigger people’s collective memories about where they were at the time.

The movie opens with digital footage you shot in 2001 or 2002. Does incorporating such material make you think about the ways you’ve changed between 2001 and 2018– itself the span of Ash‘s story–and, if so, what was gained from that assessment?

In terms of the changes I experienced in the past 17 years as a filmmaker: in the beginning, I was very much about “the here and now”–very much about shooting everything on-location, in real-time, to really capture what’s going on. Whereas the recent films I tend to start with something that’s a very long timespan; it could be from 2001 to 2018 or, in the case of Mountains, that vast timespan that I wanted to really examine. So, basically, instead of focusing on “the here and now,” I now bring in the historical perspective to examine. In order for me to see “here and now,” I not only need to see it right here. I also need to see it beforehand; I also want to know what happened after that.

That’s the reason why, in terms of the historical-temporal timeline, I’m trying to move back or move forward with the films, as you see with Mountains or Ash. With Mountains, you also move to the near-future of 2025. So I think that will give me a different perspective to examine what’s going on, in terms of society, individuals in these different historical contexts, as a way to tell my story. But also–I think more than before–I focus on the abstract idea of who human beings are in terms of seeing human beings as a humanity or a system, and then examine that in a very macro, abstract way. In the past, I tended to think of things in a more concrete, practical way, in the day-to-day life they’re dealing with. But now I’m seeing something transcend “the here and now” to something more historical and abstract.

I imagine it’s also a symptom of getting older.

And experiences–the accumulation of experiences. And of course, when I was young, I didn’t experience a lot of life; therefore I didn’t have much frame of reference. Whereas now I’m older and more mature, and it’s not that I need to build it into my narrative to see things from the past, the present, and the future. I think it’s a way of thinking, of understanding the world, when I’m middle-aged — the way to think about everything.

Its Chinese title, Jianghu Ernü (roughly Sons and Daughters of the Jianghu), is very complex:”jianghu” could refer to rivers and lakes, as well as the criminal underworld at this movie’s center. The first-reported English-language name was Money and Love…

…which is great. Then it became Ash is Purest White, both a line from the film and an amazing title. Do you feel a distance from it? Is it not a proper way for you to think about your film?

I think, definitely, it’s very different how we interpret, understand, and feel Chinese and English titles, based on the audience it speaks to. For its Chinese title, Jianghu Ernü, especially as a phrase, it’s a set phrase that isn’t very well-known, has a very long history; it’s from ancient cultures. That particular phrase will immediately trigger any member of the Chinese-speaking audience about “the good old days” or how people lived in the past. They have very clear values in terms of what the interpersonal relationship should be like–how they think about loyalty, about certain core values to hold onto.

So I do think that particular phrase immediately triggers that connection with the traditional value and codes of conduct for many, many Chinese people, and that coincides with what I’m trying to express with this particular film. It’s to say “that was what we had before,” and because of the current society and rapid change and economic changes you are seeing in current Chinese contemporary culture, there’s a very dramatic erosion of these core values and the interpersonal relationships that are quickly disappearing. So that is the reason why I think it’s perfect to tease-out when they listen to Jianghu Ernü: they can immediately make that connection of what we had before and no longer have now.

In terms of the English title, since the translator told me early on that “jianghu” is very hard to convey and translate into English that can be understood by a non-Chinese-speaking audience. We had to find a different title; I thought about Money and Love. It’s not until thinking about the whole sequence involving the volcano ash that I realized it actually, also, has a very symbolic connection with the characters in this film, the sort of fate that they have to deal with–the essence of a life is something that can just disappear and no one would notice. They are irrelevant on the grand scale of things. That very much echoed and evoked this concept of ash, or a dust in the air, that is just so insignificant, and you are under so much pressure in this heat of being incinerated into ash and dust. I thought that was a great way to bridge that concept.

Ash has an astonishing fight sequence that’s unlike anything in your filmography. Talk to me about the coordination and inspiration, as well as how it might lead into your next film, In the Qing Dynasty.

So I love action films in Chinese cinema, including gangster films and mobster films. There are a lot of masters in this world–John Woo, Johnnie To–but, for them, these sequences tend to be more attuned to the choreographed dance than the actual violence that you observe in the street. For me, as a filmmaker, I really want the action sequence to be very naturalistic, very realistic, and that’s why I chose to somehow stage that particular fight sequence in such a way–with the long take, uninterrupted, to depict the violence in a very realistic and naturalistic way.

Do you expect Qing Dynasty, produced by Johnnie To, to be action-heavy?

I do think it won’t be as realistic or naturalistic as the one you see in Ash is Purest White. It’s a period piece and very much paying homage to the wuxia genre, so it’s almost as if most of the people with that kung-fu, wuxia ability have supernatural powers. So it’s not going to be as realistic as this movie’s fight scene, but how am I going to put out something that is not the same-old, same-old as other wuxia films? It’s something I’m still thinking about. How can I distinguish myself from the rest of the filmmakers?

Mountains almost had an explicit sci-fi angle by featuring, in its last segment, a romance with an alien. Ash is a tribute-of-sorts to the Hong Kong films you loved in your youth. Next it’s the wuxia picture. As you get older and accumulate more experience–and, of course, more money; word has it Ash is your most expensive film–is there a sense of being able to tick off the boxes of beloved genres that you may not have been able to explore before?

I don’t think it’s about whether or not I have the resources or funding to make the films I love and want to make and didn’t get to make in the past. If you think about the funding part–because of the film industry and my connection with that, and also the resources I had in the past ten years–if I wanted to make these films, I could. It’s not about the lack of funding; I think it has to do with the issues I wanted to examine, the reality I wanted to examine, and I just wanted to find a new perspective, a new way to examine the things I want to examine now.