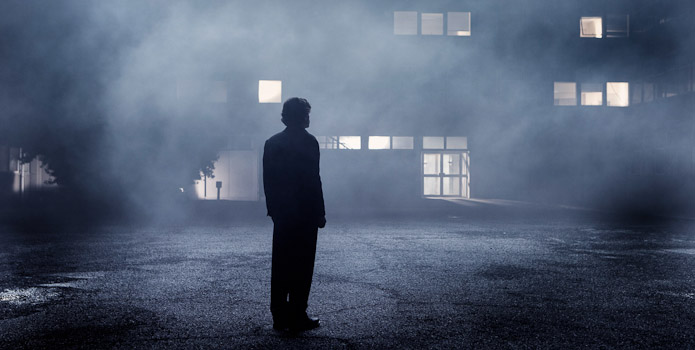 One of the most well-received films of the fall festival slate was Richard Ayoade‘s Submarine follow-up The Double, but oddly the film left TIFF without any U.S. distribution. Featuring Jesse Eisenberg and Mia Wasikowska, we hope some movement is on the way in that arena, but today, we’ve got the first two posters for the film, which is just now stopping by London Film Festival.

As we said in our review, “as adapted by the helmer and Avi Korine, The Double brings Fyodor Dostoyevsky‘s novella to the big screen with a surefire confidence in its visual form and an eccentric comedy that should go a long way towards securing the IT Crowd star as a permanent, unique voice in contemporary cinema. There is a definite stylistic kinship to his first film, pairing it well with this one’s descent into a psychological conflict of identity: every waking second of Simon James’ (Eisenberg) entire existence shatters with the introduction of a confidently superior doppelgänger named James Simon.”

Check out the posters below via Empire (who spoil some cameos, so be wary of clicking over there) for the film also starring Wallace Shawn and Noah Taylor, along with a 30-minute interview with Ayoade and Eisenberg.