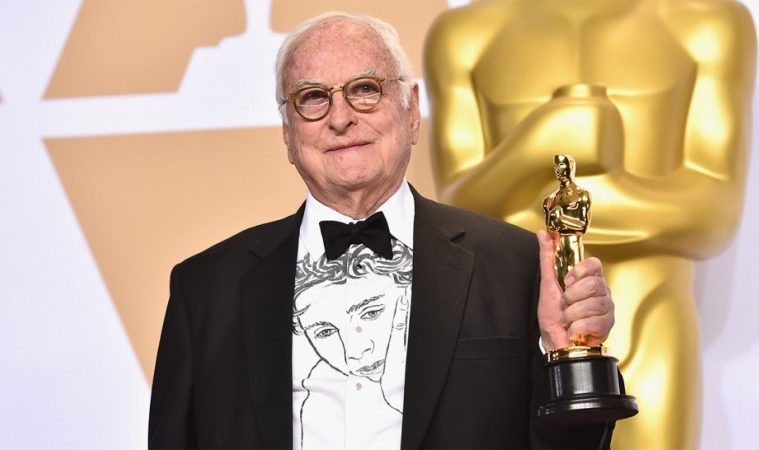 James Ivory Wants to Bring Daniel Day-Lewis Out of Retirement

No, Daniel Day-Lewis is not backing out of his retirement from acting, but if it was up to James Ivory, he would be. In a recent conversation with Film Comment, the 90-year-old director and Oscar-winning Call Me By Your Name scripter explained that he’s “been thinking about doing an adaptation of the novel Coral Glynn by Peter Cameron, which I’d like to direct, set in England in the 1950s.” He continued, “There is a sharp detective in the story which would suit Daniel Day-Lewis, just as there are very good parts for Helena Bonham Carter, Julian Sands, and Rupert Graves, now all in their fifties.” While Carter, Sands, and Graves are all still working, it seems ambitious to recruit Daniel Day-Lewis, who announced last year that his role as Reynolds Woodcock in Paul Thomas Anderson’s Phantom Thread would be his last. When asked the inevitable question about this matter, Ivory replied, “Daniel has retired from film acting before, but came out to play Abraham Lincoln. Maybe he will also want to play our detective and will be ready to be coaxed out to join his old friends.”

While it’s safe to say that absolutely no one would complain about Day-Lewis’ return, Ivory’s Coral Glynn adaptation is still very early in development and only time will tell how the project comes to fruition – and if Day-Lewis will make yet another revival.

However, while this news is surely exciting, Ivory has another upcoming project that’s a bit more immediate. Along with Fox Searchlight and director Alexander Payne, Ivory has adapted The Judge’s Will, Ruth Prawer Jhabvala’s final short story. The short story was initially published in The New Yorker in 2013 and follows a recently widowed wife of a judge, who stated in his will that his family will financially support the mistress he’s been seeing for 25 years.

While Jhabvala’s story takes place in Delhi, India, Ivory is looking set his adaptation stateside in Chicago. He told Film Comment, “The story is one that could well take place in other countries; it’s not inherently Indian, nor are its characters. Ruth would, I know, have applauded this move to the American Midwest. That’s the way she was. So I feel I’m on solid ground on the terrain Payne has chosen, and I’m looking forward to working in Chicago. I have always liked that city.”

James Ivory’s perceptive take on Jhabvala’s story is likely a testament to their lifelong collaboration, which started in the 1960s when the famous Ivory-Merchant dyad took on Jhabvala’s novel The Householder. Nearly 60 years later, Ivory is continuing to show enthusiasm for Jhabvala’s literature and if we can learn anything from his oeuvre of adapted work, we can expect something truly superb.

With Alexander Payne attached to direct for Fox Searchlight, Ivory is now formulating his adaptation of The Judge’s Will and will continue drafting throughout the year.