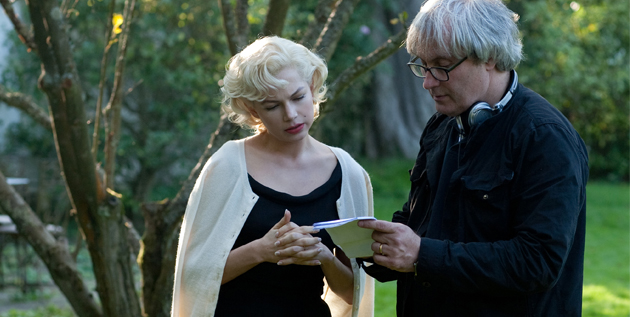 [Interview] Director Simon Curtis on ‘My Week With Marilyn’ Director Simon Curtis is no stranger to a camera, and though he has worked in television and theatre, he is making his big screen debut with the upcoming My Week With Marilyn. The biopic is a brief glimpse into the on and off set life of Marilyn Monroe as she attempted to break out in a major way beyond her sexpot image and emerge as a serious actress. Focusing on the brief interactions of Monroe (Michelle Williams) and Colin Clark (Eddie Redmayne) on the set of Sir Laurence Olivier’s (Kenneth Branagh) 1957 film The Prince and the Showgirl, it is a winding and boisterous tale that is anchored by Williams’ tremendous performance.

Earlier this month I had a chance to sit down with the director. We covered a number of topics, including how much work went into transforming 30 year-old Williams into the then-30 year-old Monroe, his idea on method acting, the length of development for the project, the nervousness on set and his criticism of Olivier’s handling of the admittedly disruptive Monroe: The Film Stage: Let’s start off with something a little more fun. Was Michelle ever late on set?

Absolutely. How much work went into her hair, her makeup, her dress, her outfits?

Curtis: A phenomenal amount. Michelle, herself, is a perfectionist and has a thing for all of that stuff, and is very deep and has very strong opinions.  She was surrounded by a great team, as I was. In particular, I think Jenny Shircore is really the [expert] of makeup and a really brilliant asset for the shooting.

At any point did you have to say, ‘OK, this looks fine. Let’s go ahead and…’

Curtis: Well, there’s always that tension on the set. As a director, you have to pretend that actors have all the time in the world to do their magic, but you’re also thinking, ‘Oh my God, we’ve got to be out of this location by three in order to do one more thing.’ Particularly on the budget that we had. It was a very tight schedule. Obviously some of the tightness with the schedule was because of Pinewood Studios. You mentioned yesterday [during the Q&A] that you were sandwiched between three major productions…

…going on at the same time. Did you film all of your portion in a two-week span or…

Curtis: As I remember, we went in and out. But a curious piece of English film memorabilia is that I think this may be the first film ever to shoot at Pinewood, Shepperton, Twickenham and Ealing studios. All four studios are featured in the film. We needed so many different nooks and crannies of the period film studio.

Had you dealt with a lot of method actors before this?

Curtis: Yeah, I’m a great fan of American acting… American actors. So I’ve worked with quite a few.

Was it difficult or did you find it as a different trade-off?

Curtis: Funnily enough, I think my instinct is closer to the American way of working than the British. I like to sort of come to a character through the psychology and the inner-life. So in my theatre work, I’ve often worked in a way more akin to that than the sort of more obvious, old-fashioned acting, as it was then perceived in England, derived from the theatre and so on. Because now, I think all great actors do everything and there’s scarcely an American film or TV show without a Brit actor in it and American actors happily come to work in England. I’m married to an American actress who lived in England. I’m very aware of that sort of two-way traffic now. You mentioned yesterday [during the Q&A] that there was a long development time for this particular film. What [were] the struggles that you had to overcome?

Curtis: It wasn’t really struggles. It’s just you have to be patient in film. You have to get the rights, find the writer, work with the writer getting the script ready, then show it to sort of various financiers who have script notes. And even then you work on that because you want the script to be in a certain place before it’s read by actors. You know what I mean? So, really, I think it was in two years, Michelle and I first met, and her signing kick-started the film. What did you do in preparation and at what moment did you look at her and say, ‘This is perfect’?

Curtis: That’s a good question. I just sort of had faith in Michelle. But there was one time…we did a day just with Jenn Shircore doing the makeup and with them working together. I think that was a very exciting day because when you look at the photographs of that, you knew she was going to be able to become Marilyn.

Yesterday you kind of mentioned that you thought Laurence wasn’t quite supportive of Marilyn. You criticized him a little bit. I thought it was refreshing to hear someone say that about an actual director. Expand on that.

Curtis: Well, I think there’s plenty in Marilyn’s behavior to annoy a director, and Olivier particularly. He was a very high-status man used to getting his own way. So I have some sympathy there, but I also think as a director, your job is to support your cast, your actors. And I think he should have traveled a bit more to her needs.

And did you, at any point, go through those moments yourself on set where you felt like you had to support anybody or was it a pretty easy shoot?

Curtis: Well, it was a great shoot because everyone is so committed to it and so talented, but it can’t always be fun and games. My job is to support everybody and I’ve got a lot of support myself, too. It’s tricky, doing a film on this schedule. Each do your best to give everyone what they need. My Week with Marilyn opens on November 23rd in limited release and will expand further throughout the year via The Weinstein Company.