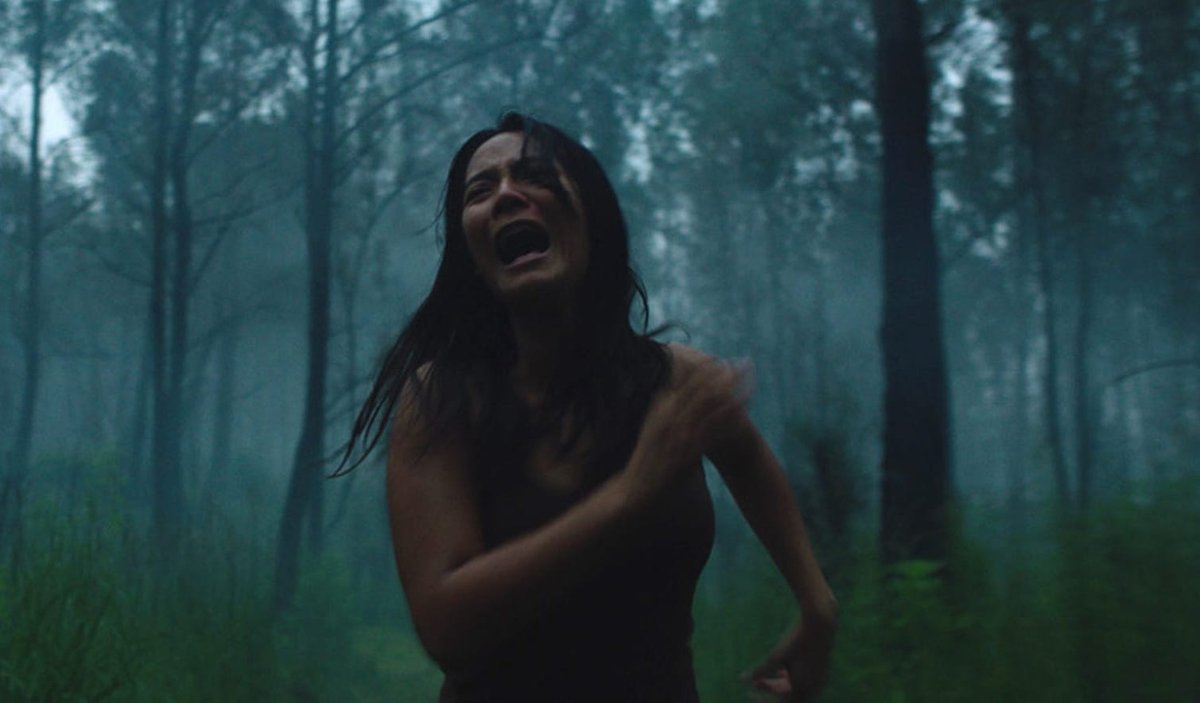 Life has never been easy for Maya (Tara Basro). Raised by her aunt with no knowledge of her parents’ history, she’s struggled finding her place in the city. Her sole comfort is best friend Dini (Marissa Anita), a tollbooth operator like herself who’s promised to help open a clothing business if they ever save enough money. So when a strange man drives through her lane on a deserted evening three separate times, it’s hard not to fear the worst. No matter how difficult life has been, however, Maya has no intentions of dying—especially not at the hands of a creep who believes she’s someone else. And yet there is something familiar about the name he uses. Whether that realization is good or bad remains to be seen.

This is what we learn during the opening prologue to Joko Anwar’s Impetigore—a wonderful scene reminiscent of the classic cold opens to slasher films of the 80s and 90s. We’re thrown into this tiny, claustrophobic booth with Maya, forced to watch her fear grow with nowhere to run once this unnamed man approaches. Between the strange name uttered, his emotionless stare, and a mysterious scar on her thigh that he opens before striking, we receive plenty of questions as his machete rises. Questions are all Maya has too, though, so our curiosity is piqued right alongside hers when an old photograph inexplicably corroborates a lot of what her assailant said. Maybe she is the Rahayu he sought and maybe the mansion in the photo is her inheritance.

There’s only one sure way to find out: travel to this village no one has ever heard about and see what she can find. Since the last person to ever mention it to her tried to chop off her head, however, Dini won’t let her go alone. So the two set off on a journey that puts the ghosts of three little girls into the corner of Maya’s eyes and an expert puppeteer at the end of their path. Hopefully Ki Saptadi (Ario Bayu) can begin to give them answers without them tipping their hand as to their true identities because there’s no knowing who else might want Rahayu dead. It’s therefore unfortunate when they discover everyone does because Maya is the key to lifting a decades-long curse.

To say much more than that would ruin some of the surprises that Anwar has in store since duplicity runs very deep throughout the mythology he has created. How the curse manifests, what Saptadi thinks he must do to stop it, and the intricacies of its origins are carefully shrouded in secrecy until the narrative is ready to unleash the details of each with a graphic display of blood. This decision allows many of the twists and turns to hit us with an effective wallop, but it also ensures the need for a lengthy exposition dump that will ultimately set the record straight at the eleventh hour to provide our heroine a potential solution that may or may not guarantee her own safety regardless of whether she succeeds.

Stopping a film in its tracks to force this kind of flashback is never a great choice, but I do think it works here because of all the speculation swirling about. Just like Maya is unaware of her own childhood in this place, the town is operating on a ton of assumptions passed down by those who were alive to witness both what happened and what was done to make matters worse. And since everyone has been listening to Saptadi and his mother’s (Christine Hakim’s Nyi Misni) version of unwanted black magic and their futile efforts to stop it, that account becomes the truth. Fear has thus driven each resident to the brink of murderous intent if it means reclaiming a future they thought was lost.

So Maya must be awakened to the facts by the only possible avenue Anwar can provide: the supernatural. For better or worse, her ignorance and the village’s indoctrination has made it so the truth is forever out of reach without such an intervention. It will surely alienate a bunch of viewers, but it will also present a worthwhile path forward. Because while most horror villains operate with malicious intent, many included here have committed unspeakably heinous crimes in the name of justice and hope. The truth therefore brings a horrible recognition with it to some. It reveals how the blood on their hands might not have been in service of anything but a lie. The tragic history of these people is rendered ever more tragic as a result.

That to me is Impetigore‘s strongest aspect. Few if any of the characters are acting with evil hearts. These are parents doing whatever they can to save the lives of their children—steeling themselves to unforgivable deeds done in the faith that the blood spilled will be worth it. Despite potential allies (Asmara Abigail’s kindly Ratih and Abdurrahman Arif’s driver Nano) shielding them from a village of begrudging yet vicious enemies, Maya and Dini are more or less alone and helpless when it comes to opening the eyes of those who are unaware their eyes are closed. I’m not certain Anwar provides enough information to justify an epilogue teasing future installments, but he’s definitely built an intriguing, uniquely Java ghost story to support this one’s achievement.

Impetigore is now on Shudder.