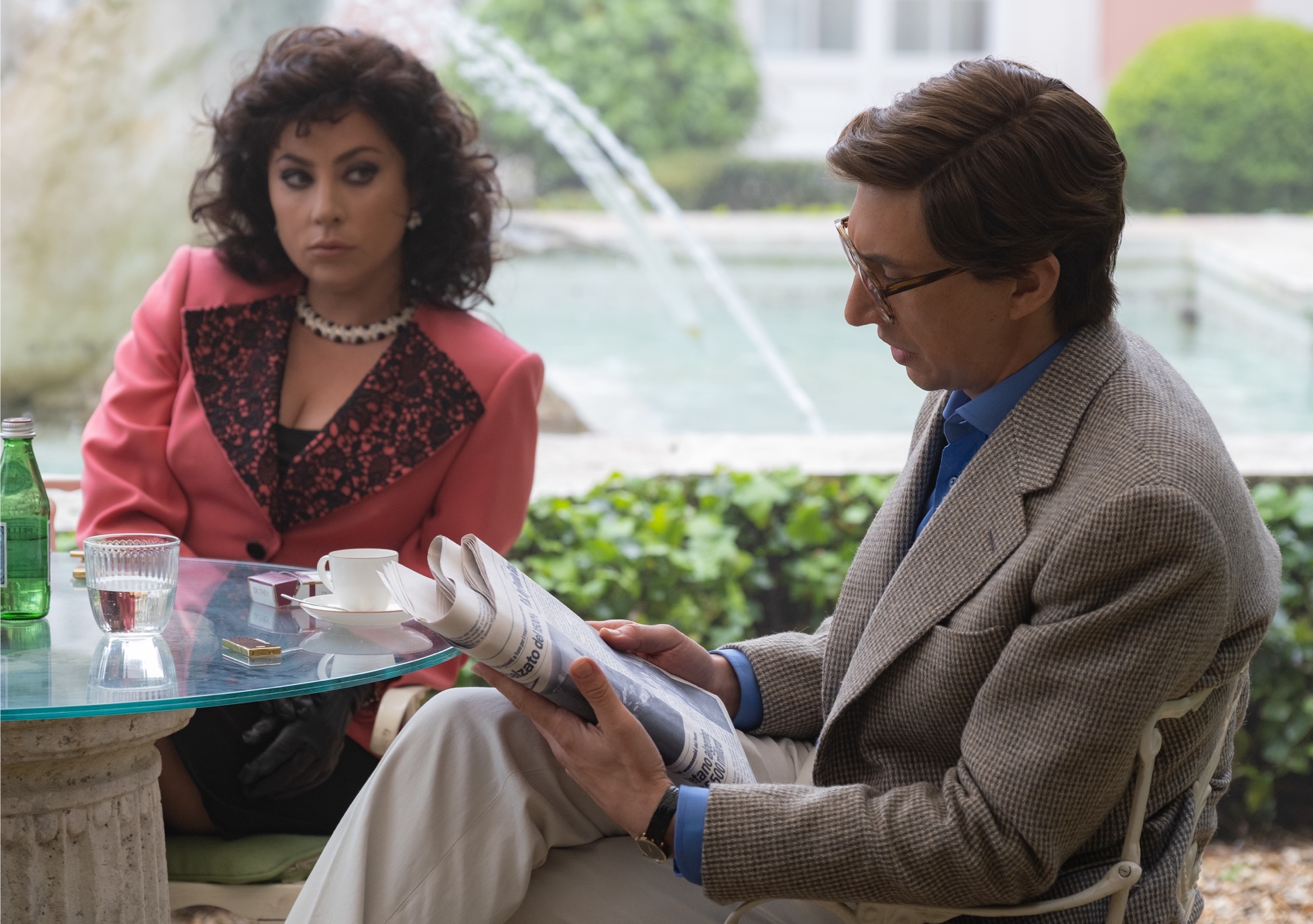 Upon sitting down to write about House of Gucci, I thought I’d open with a quote. There had to have been some line, however peripheral, that stuck. That wasn’t the case. How about a moment that encapsulates its 157 minutes? It has the components necessary to dive into its artifice, at least in theory. There’s the grandeur, and there are the more hyperbolic aspects that match whatever people loosely toss the term “camp” at. Alas, nothing on that front dug its heels into me either. Instead all I asked was why this thing is so hard to latch onto.

It’s probably because of the script, which feels like more of an information dump of vignettes than the parsimony Ridley Scott’s direction tries to cobble it toward. It might even be because some of the cast is oddly forgettable. And what if it’s actually because this plot is better suited for a longer format? House of Gucci’s script from Becky Johnson and Roberto Bentivegna, based on Sara Gay Forden’s book, covers approximately two decades. The runtime, while imposing at first glance, is actually quite brisk. Matched with its overall lack of focus, however, it soon becomes clear something’s missing.

In the beginning, Patrizia Reggiani (Lady Gaga) meets Maurizio Gucci (Adam Driver) at a club. She comes from modesty, her father (Vincent Riotta) the owner of a transportation company. He comes from haute couture and, despite his ambivalence toward his family’s ventures, a namesake. She pursues him. He reciprocates. They get married. Her interest in him soon grows into a quest for a stake in the fashion dynasty and, as the true story goes, vengeance. The fodder for something much more bilious is here, but there’s such a disconnect that neither serves a central approach nor complements its characters. Instead it feels incomplete.

One might argue that’s the point: here’s a menagerie of wealthy, detached people being wealthy and detached, their entire lives predicted by adjectives, and most of them are much more passive than they recognize. When Patrizia and Maurizio get married, the latter’s father Rodolfo (Jeremy Irons) immediately voices skepticism that she’s after their money. Uncle Aldo (Al Pacino) echoes him, both their reservations falling on deaf ears—and those are their only functions. Even the most eccentric, namely Paolo (Jared Leto, stuck in the stratosphere), are collections of tics and brief discussions about Patrizia that don’t do much.

Given how often she stays the center of attention, one would think she has quite the presence. She doesn’t, notwithstanding Gaga’s charisma (and odd accent aside). Johnson and Bentivegna fail to sketch her beyond the Lady Macbeth archetype to be expected. There’s not much character growth or ethical descent; she’s too stock in the beginning and lacking in economic background aside from––to use one of those adjectives the film runs on––her humble beginnings. Her relationship with Maurizio doesn’t help a ton, either, in how the script lacks in juxtaposing her ambition with his professional indifference-turned-apathy.

If anything he feels like little more than a cipher for conflict to occur. Again, one could argue that to be intentional—drawing power from the man closest to the center and directing it toward the woman. But there are no true dissections of class, gender roles, or familial dysfunction to fully work on a micro or macro level. They may pay off at times in one of the two manners; not both.

Others in the Gucci dynasty feel much more like myopia to spruce up interest in some ostensibly central topics. Take Paolo’s own ambitions as he launches his own business. His scenes play as slaps to the back of the head to make sure the viewer stays awake, exaggerating caricature work in the name of immediate entertainment rather than anything cogent. It manages to get a reaction at times. It also, like most of Gucci, goes for something while never being too sure of what that something is.

Other screenwriting devices fail to provoke much of anything. Patrizia and Maurizio’s daughter Alessandra (Nicole Bani Sarkute, then Mia McGovern Zaini, and later Clelia Rossi Marcelli) is a symbol of the domesticity the two aspire to maintain. Yet again: is that the purpose given their shallowness? It could be, but in practice she’s a prop to help audiences track the years as she grows. The threat of ennui is lacking to the point that Scott’s spatial and emotional mediocrity doesn’t quite find its own redemption.

The anecdotal structure does at least help that time pass quicker than what the text itself allows. With that, Scott and editor Claire Simpson do decent work at baiting the viewer—not into connecting, but trying to connect. It’s a rarity in that regard: something that constantly provokes the question “do I actually like this?” Gaga is charismatic in ways that gives lens into her perspective, which the film needs more of. Salma Hayek, even in a role that feels fundamentally miscast, also manages to keep the momentum in later stretches.

But despite the reasons House of Gucci doesn’t work, none are damning enough to make a bad movie. It’s forgettable, sometimes playing like the sort of cable-TV fare that displaced these tales from the silver screen over the past decade. Yet Scott’s efforts, and especially those of Johnson and Bentivegna, just don’t keep up. And what’s the point of going big if you’re not going to go for it all?