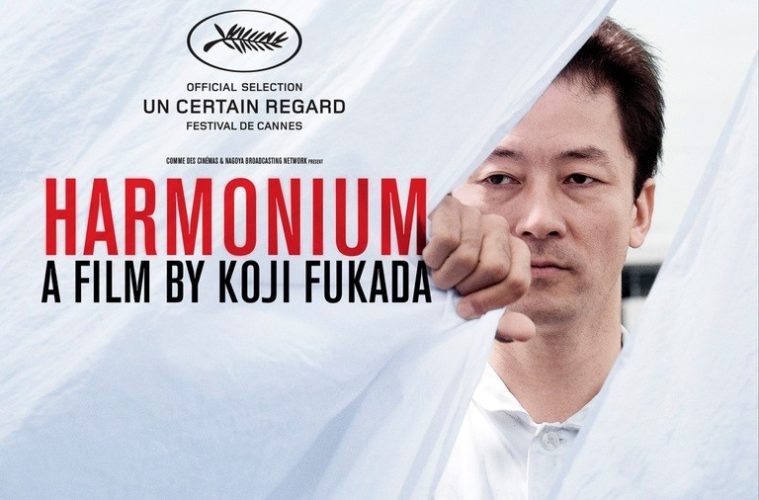 Much of what tantalizes about the seemingly straightforward drama Harmonium is what makes it so difficult to describe. It is nominally a domestic drama, centering on a family whose normal middle-class existence as owners of a metal workshop is slowly, heartbreakingly upended by the arrival of Toshio’s old friend Yasaka (Tadanobu Asano). However, it holds more than a tinge of the thriller to it as well, and while the film never truly leaves its dramatic vein, writer-director Kôji Fukada’s skill is such that it moves around within this zone, assuming the quotidian and the suspenseful with shocking ease.

There are many components that make Harmonium unexpectedly engrossing, but chief among them is its sense of space. With some exceptions, most of the film takes place within the family home, a setting that becomes familiar as the narrative unfolds. It feels fully lived in, something borne out by Fukada’s extensive use of unfussy but fairly rigorous compositions throughout. Save for the occasional handheld shot, he largely relies on either tracking shots or static profile shots and, in a touch reminiscent of Ozu, straight-on camera angles.

This comparison to Ozu is somewhat apt; though there is a great deal of narrative drive and more than a hint of cruelty with regards to the plot developments. Fukada never aims to completely telegraph his intentions, and instead wraps them in more mundane, simple moments. Harmonium is constructed judiciously from these little scenes, like the one where Yasaka teaches the daughter Hotaru (Momone Shinokawa) on the eponymous instrument the song that serves as a haunting motif throughout the film, or the various scenes of the family at the dinner table, with the husband Toshio (Kanji Furutachi) eating while his wife Akie (Mariko Tsuitsui) and daughter pray.

Of course, Harmonium does not stay in this vein, so it is fortunate that Fukada handles the more traditionally suspenseful scenes well. He accomplishes this with great assistance from Asano, who gives a singularly unsettling performance, akin to something out of Kiyoshi Kurosawa’s Creepy, which absolutely dominates the first half of the film. Clad almost exclusively in a spotless white dress shirt and black pants, he cuts a seemingly unassuming presence, all formal niceties and politeness, that instead gives the family and the viewer a dose of unease, extending even to the scenes where he appears to bare his soul. Asano’s charisma and inherent menace — he is revealed fairly quickly to spent the last eleven years in prison for murder, an act which he supposedly feels immense remorse for — is such that when he does exit the film at the halfway point, just before the time-skip to eight years in the future (an ellipse worthy of Ozu), there is a sense that the movie loses something, which Furutachi and Tsuitsui do their (not inconsiderable) best to fill.

That aforementioned turning point, predicated by a traumatic and fairly unexpected event, also foregrounds what Harmonium had heretofore elided. It shifts from a collision between the regular life and a potential intruder who insinuates himself into the home into a much more traditional portrayal of the tenuous bond between husband and wife as they deal with unimaginable circumstances. This development would seem like the natural progression, but the film, rightly or wrongly, cannot escape the shadow of Yasaka, whose impression is certainly meant to be felt to some degree or another, particularly with the introduction of another character into the domestic space.

However, Fukada remains doggedly committed to this often harrowing tale, rarely flinching as his characters undergo a series of traumas both visible and invisible, and only indulges in true confrontation towards the very end. His film may be a bit too obviously constructed as it hurtles towards its ambiguous close, but there is no denying the power and remove with which he realizes it.

Harmonium is now playing at Film Society of Lincoln Center and will expand in the coming weeks.