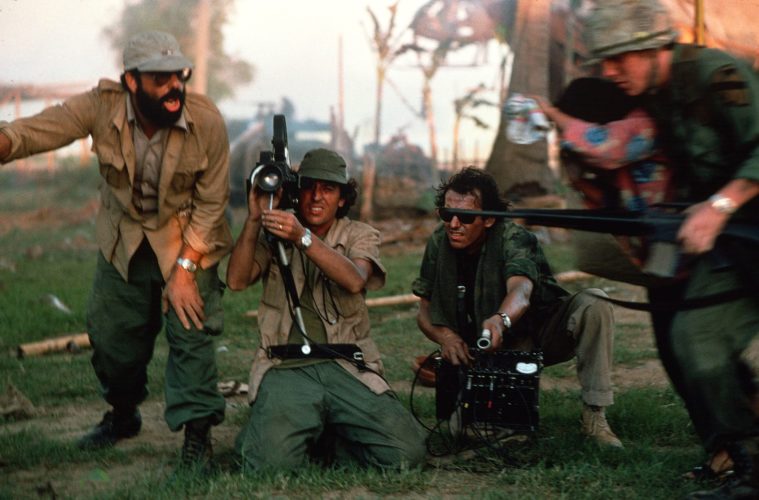 This is not a recapitulation of the production (Eleanor Coppola did that), a summation of how and why there is now a definitively subtitled Final Cut (Francis Ford Coppola did that), or a conveying of the power that comes with seeing Apocalypse Now projected big and played loud (I don’t want to do that). Nor is it a review, which at this point is not unlike describing The Last Supper to Renaissance enthusiasts.

So, yes: Final Cut. The words conjure up hope for those who love pieces of Redux‘s approximately seven-hour additions, start shifting in their seat once Col. Kurtz appears in full daylight–one of many choices suggesting a work best left carved-down–yet are unable to shake Coppola’s assertion that the original iteration isn’t actually quite to the level of weird for which he’d aspired. (Up next: extended tangents about Dracula, Youth Without Youth, and Coppola as the American Raúl Ruiz.) Those who prefer going theatrical will likely roll their eyes at his Lucas-like one more try (or, cynic says, the fact that this ties into a 40th anniversary). Coppola stood before the Beacon Theatre on Sunday evening and briefly explained a desire to reconcile the best impulses found within two phases of his career: while the 2001 recut was easily dismissed–202 minutes of the most difficult undertaking in Hollywood history relegated to a terse “too long”–its spirit haunts Final Cut. More a reigned-in second stab than radical reworking, it suggests where he’d turned right or wrong, shows an affable stubbornness in the retention of lesser-liked pieces, and at day’s end maybe breeds further ambiguity as to what really shapes a masterpiece.

Odds say you’d mostly like to know what’s changed. With the caveat that I have not seen any iteration of Apocalypse Now in several years–his caveat itself qualified by an assertion that Apocalypse Now, seen at least a few times, sticks in the brain more than most things last viewed around that time–it’s safe enough to say this is, at close to three hours (new end credits included!), the beloved 1979 film with a retention of Redux‘s infamous French-plantation segment and an occasional splash of the other edit’s colors: the bit with Kilgore’s surfboard, perhaps some more Kurtz at his camp, several atmospheric shots.

The idea of a perfect edit having been invoked by the man himself, one hopes he’s found finality on this movie that sometimes seems it could stretch ad infinitum. I hesitate to call it so, much less definitive. Impatience creeps in as Willard arrives at Kurtz’s compound and is subjected to readings of T.S. Eliot, these reservations are closer to momentary and ephemeral than an obvious fissure in the big picture; whether an intermission might’ve mended my impression of two closely connected parts, the reconfiguration, compartmentalization, and selective editing of memory proves generous. And the magnificent is only more magnificent once provided big and loud, and to slightly break the last promise up top: Apocalypse Now on this scale, at this seat-vibrating volume, offered a fresh lesson in well-walked ground, which is more or less the high watermark for anything so steeped in the culture.

Apocalypse Now: Final Cut gets limited theatrical engagements in August, followed quickly by a 4K home-video release, obviously–it’s unthinkable that American Zoetrope would make this a one-time event, all the more when a 40th anniversary’s to be celebrated. Whatever my doubts about the necessity, I hope Coppola lives long enough and hoards enough resources to give us a new edition should his super-active mind get the idea. Maybe I’ll wonder why one thing’s here and the other thing’s gone next time around; it’ll be an event all the same.