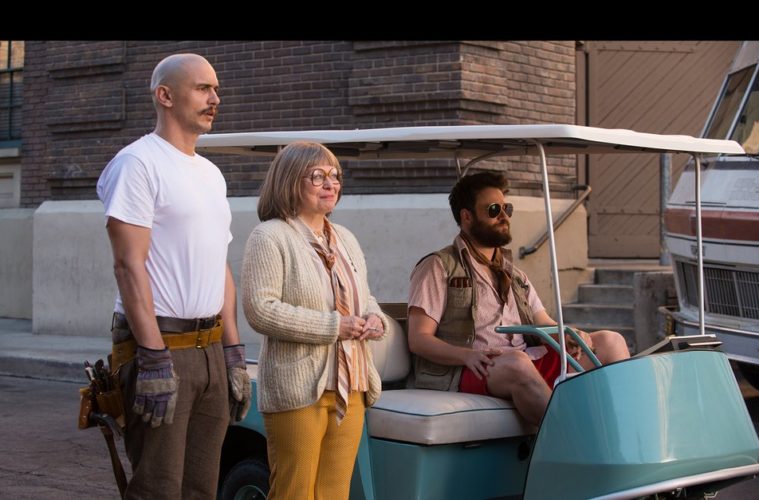 After adapting William Faulkner and Cormac McCarthy, what looks to be James Franco‘s most ambitious directorial effort yet is an adaptation of Zeroville, based on Steve Erickson‘s book, which serves as a dark parody of the New Hollywood movement. Now the first sales trailer, clocking in at over four minutes, has landed.

The story focuses on Ike “Vikar” Jerome, who has just moved to Hollywood in 1969. With tattoos of Montgomery Clift and Elizabeth Taylor on his head, his journey “ends in both tragedy and discovery.” The book features many New Hollywood icons, such as Robert De Niro, Brian De Palma, John Milius and Paul Schrader, with the ghost of Clift even showing up.

However, outside of the cast — including Seth Rogen, Jacki Weaver, Megan Fox, Craig Robinson, Will Ferrell and Danny McBride — in terms of filmmaking icons, the first trailer only features a Wim Wenders cameo, which makes sense after Franco recently worked with him.

Check out the sales trailer (while it’s still available) and poster below.

Update: As expected, the producers have removed the trailer. Check back for the official one.

A proto-punk Forrest Gump comes to Hollywood…. Join VIKAR (James Franco), a wide-eyed innocent in love with the movies, on one wicked trip to the heart of a pulsating, kaleidoscopic Hollywood. Naïve newcomer to the City of Angels, carrying nothing but his “outsider” past and a huge tattoo of Montgomery Clift & Elizabeth Taylor inked on his shaved skull; driven by the allure of cinema to the glittering temptations of Zeroville; a town where anything goes. Encounter the parasites, the punks, the wannabes, the power-brokers and the crazies: meet VIKING MAN (Seth Rogen) – gatekeeper to all the right parties, a cigar-chomping surf hippie; Vikar’s eccentric Hollywood guide. You’ll encounter: the livewire super-agent RONDELL (Will Ferrell, uncredited); foul-mouthed industry veteran DOTTY (Jacki Weaver); the sinister FINANCIER (Danny McBride); sexy femme fatale SOLEDAD (Megan Fox) – a haunted “dame”, the electric charge to trigger Vikar’s breath-taking dive into the captivating world where movies are made. Profoundly magical, funny, unsettling, and gorgeous – a love letter to Los Angeles and provocative satire of America’s fascination with itself, its cult of celebrity; a vision of the death of Old Hollywood.