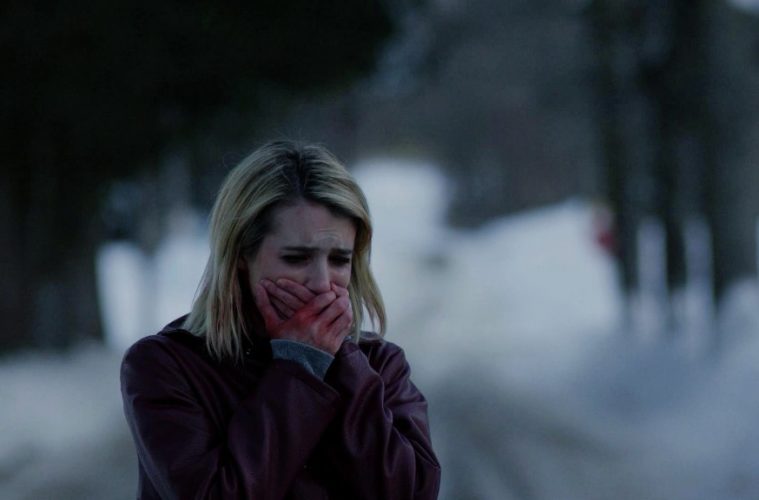 After last year’s The Witch and The Monster, there was shades of horror in both Krisha and Green Room, but now A24 is back with another fully-fledged entry into the genre with this spring’s The Blackcoat’s Daughter. Formerly titled February when it premiered at TIFF, Osgood Perkins‘ debut stars Emma Roberts and Kiernan Shipka in two parallel stories of horror at a prep school and a girl who is trying to get there. Ahead of a March release, A24 has now debuted the full, unsettling trailer.

We said in our review that it’s “a stylish exercise in dread, teasing out its slow-drip horrors with precision, and building a deliriously evil presence that hovers along the fringes. However, there’s a thin line between mystery and vagueness in storytelling, and it becomes difficult to decide where a film fits when it only works in the context of a specific structural order.”

Check out the trailer below for the film also starring Lucy Boynton, Lauren Holly, and James Remar.

A deeply atmospheric and terrifying new horror film, The Blackcoat’s Daughter centers on Kat (Kiernan Shipka) and Rose (Lucy Boynton), two girls who are left alone at their prep school Bramford over winter break when their parents mysteriously fail to pick them up. While the girls experience increasingly strange and creepy occurrences at the isolated school, we cross cut to another story—that of Joan (Emma Roberts), a troubled young woman on the road, who, for unknown reasons, is determined to get to Bramford as fast as she can. As Joan gets closer to the school, Kat becomes plagued by progressively intense and horrifying visions, with Rose doing her best to help her new friend as she slips further and further into the grasp of an unseen evil force. The movie suspensfully builds to the moment when the two stories will finally intersect, setting the stage for a shocking and unforgettable climax.

The Blackcoat’s Daughter opens on March 31.