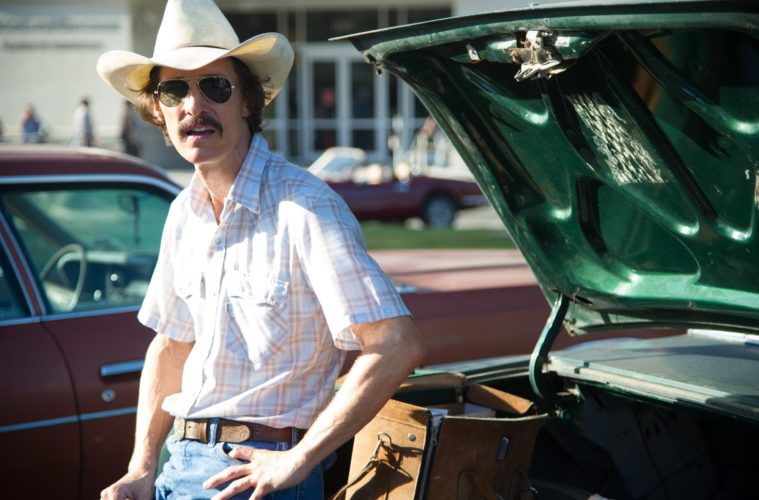 After last year’s string of success with Bernie, Magic Mike and twisted turn in Killer Joe, Matthew McConaughey is back in a major way yet again. Aside from kicking off production with Christopher Nolan on one of our most-anticipated films of next year, Interstellar, his Mud become one of 2013’s biggest indie success stories and before he takes part in The Wolf of Wall Street, he’ll deliver what’s shaping up to be a major performance in Dallas Buyers Club.

Directed by Jean-Marc Vallee the famed Texan stars as Ron Woodruff, a man who took it upon himself to smuggle alternative medicine into the US when his own government didn’t know how to handle the ’80s AIDS crisis. Once set for a December bow, Focus Features recently pushed up the date to early November and judging from this first footage, we can’t wait to see what’s in store.

Not only did McConaughey go under a major transformation for this true story, but as we can see below, Jared Leto did the same as a character who assists our lead. Unfortunately this first look is butchered by ET’s voiceover and editing, but we’ll update when the official one lands, likely later today. Check out the full synopsis, new stills and trailer below for the film also starring Jennifer Garner, Steve Zahn, Dallas Roberts, Griffin Dunne, Denis O’Hare, and Bradford Cox.

Update: See the official trailer and poster below via Apple. In this fact-based drama, Matthew McConaughey portrays real-life Texas electrician Ron Woodroof, an ordinary man who found himself in a life-or-death battle with the medical establishment and pharmaceutical companies. In 1985, Ron was blindsided with an HIV diagnosis and given 30 days to live. With medications still restricted in the US and the country still divided over how to combat the virus, Ron procured non-toxic alternative treatments from all over the world through both legal and illegal means. To avoid government sanctions against selling non-approved medicines and supplements, Ron established a “buyers club” for fellow HIV-positive people, giving them access to his supplies.