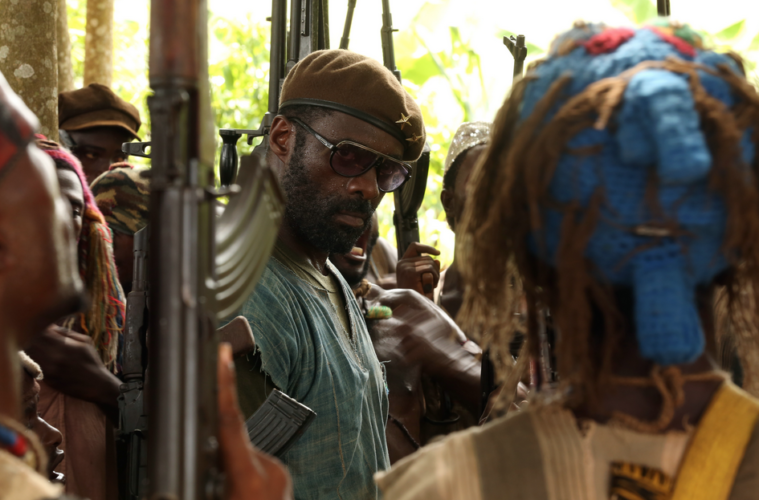 Although he launched the series with a touch of brilliance, we imagine Cary Fukunaga isn’t too upset he departed the second season of True Detective, instead turning his attention to putting the finishing touches on his next film, Beasts of No Nation. Led by Idris Elba, Uzodinma Iweala‘s story, adapted by Fukunaga, centers on a young boy, Agu, who, when civil war engulfs his West African country, is forced to join a unit of mercenary fighters. Agu must not only face the death of his father and disappearance of his mother and sister, but also join a life of violence and brutality, which is where Elba’s character figures in.

It was revealed earlier this year that the film will get a fairly unconventional release, particularly for an awards-season drama premiering at Venice and TIFF. While production only cost $6 million, Netflix picked up the film for a hefty $12 million and plans to release it the same day in October on their service and in limited theaters. In turn, the four largest theater chains — AMC, Regal, Cinemark and Carmike — will not screen Beasts, as it breaks the traditional 90-day exclusive theatrical window. However, 19 different Landmark locations will open it thanks to Bleecker Street, specifically in New York, Los Angeles, Boston, Philadelphia, Baltimore, Washington DC, Atlanta, Indianapolis, Detroit, Chicago, Minneapolis, Milwaukee, St. Louis, Houston, Dallas, Denver, Seattle, San Francisco and San Diego, Deadline reports.

If you don’t live in one of those cities, however, it’ll be easily accessible across the country through the ubiquitous streaming service. Ahead of premiering in about a month’s time, the first trailer has now arrived, which, over the course of more or less one scene, sells a deeply intense, harrowing drama with a fantastic performance from both Elba and newcomer Abraham Attah. Check it out below and return for our review from Venice.

Beasts of No Nation hits limited release and Netflix on October 16th.