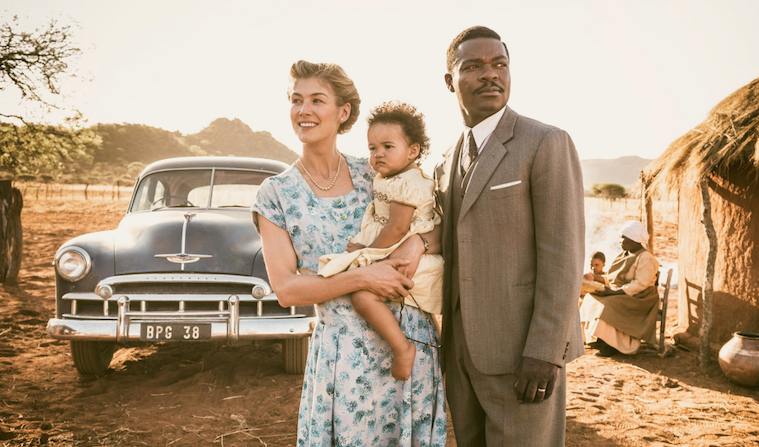 After Belle proved to be an indie hit a few years back, making over $10 million during the competitive summer season, director Amma Asante is now back with another historical drama. A United Kingdom follows David Oyelowo as Seretse Khama, a former African royal who married Englishwoman Ruth Williams (Rosamund Pike), causing a great deal of controversy.

Ahead of a premiere at the Toronto International Film Festival, the first trailer has now landed which sells a well-acted, beautifully lensed drama, which looks to be a strong double bill with another feature this fall: Jeff Nichols‘ Loving. Also starring Jack Davenport, Tom Felton, Terry Pheto, and Laura Carmichael, check out the trailer below for the film which is still seeking U.S. distribution.

Two luminous actors, David Oyelowo and Rosamund Pike, bring to life one of the great forbidden romances of the 20th century. That it’s all based on a true story gives Amma Asante’s follow-up to the acclaimed Belle even greater impact. Both sweeping and intimate, A United Kingdom illustrates how love can challenge even the harshest constraints.

London, 1947. Jazz lovers Seretse Khama (Oyelowo, also at the Festival in Queen of Katwe) and Ruth Williams (Pike) meet at a Missionary Society dance. The evening is electric, perhaps in part because both know their attraction is fraught. She’s an accomplished office worker, and white. He is a charming law student, and black. What he can’t tell her at first is that he’s also a prince, first in line to the throne of Bechuanaland (today’s Botswana). But despite the obstacles, it’s love.

When the time comes for Seretse to return home to lead his people’s independence movement, he impulsively proposes to Ruth. She accepts, but no one else does — not her family nor his. Neither does South Africa’s government, which controls uranium Britain badly needs, and stands on the eve of making apartheid a national policy. They won’t tolerate an interracial couple leading a neighbouring country, so Britain begins to work against what once seemed like the simple love between Seretse and Ruth.

Having already portrayed Martin Luther King Jr. in 2014’s Selma, Oyelowo provides another stirring depiction of a heroic figure who used nonviolence to change the world’s attitude toward racial integration. Pike is likewise magnetic as a woman whose openheartedness won over a culture initially inclined to shun her.

Their story plays out against a backdrop of regal English offices and sun-kissed Botswana plains. With her third feature, Asante has masterfully invoked a tumultuous moment in 20th-century Africa — one that boasts a glorious ending.

A United Kingdom opens on November 25th in the U.K. and is seeking U.S. distribution.